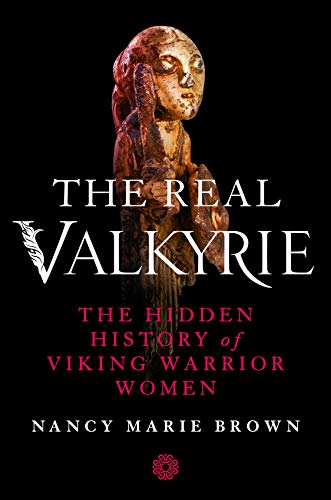 Nancy Marie Brown’s book The Real Valkyrie: The Hidden History of Viking Warrior Women combines textual, historical and archaeological evidence with imaginative fiction that informs the reader all about female warriors and queens in the Viking Age. In 2017, a grave in Birka that was initially assumed to be a male viking warrior was found through DNA testing actually to be a woman. She was buried with weapons and horses, and is the foundation for this in-depth analysis of women in the Viking Age.

Kelly was provided this ARC for a review from St. Martin’s Press.

The Real Valkyrie: The Hidden History of Viking Warrior Women by Nancy Marie Brown is, at its core, working to dispel the myth that Viking women stayed at home whilst the Viking men raided and traded. In 2017, DNA tests revealed that the body buried in grave Bj581 outside the Swedish town of Birka between 913 and 980 wasn’t the body of a male Viking warrior as initially assumed, but that of a female in her thirties or forties. Buried with the body were numerous weapons including an axe blade, spearheads a two-edges sword, a sax knife and a short-bladed knife as well as a set of game pieces, a whetstone, traders’ weights, a comb, a bronze bowl and two horses (among other things). The assemblage of this burial initially caused the assumption that the body was of a male, and specifically a warrior, but we now know that it is a woman buried with this warrior’s assemblage. The writers of Icelandic sagas and the bias of Victorian Age scholars have essentially mythologised any woman in the Viking Age who possessed strength, cunning or ruthlessness. Nancy has taken it upon herself to highlight the archaeological evidence that proves that women of the Viking Age did, in fact, possess these traits.

It is obvious that this book was extensively researched. Nancy utilises sagas, poems and epics of the Vikings in conjunction with archaeological and historical evidence to question the way in which females from the Viking Age have been viewed for centuries. Rather than simply providing the evidence that women from the Viking Age have been sorely misremembered thanks to the act of sexing graves by metal, the reflection of Victorian sensibilities of the nineteenth century placed on the Viking Age and the tendency for Icelandic writers of the 12th and 13th centuries (I’m looking at you Snorri Sturluson) to mythologise and generalise the female warriors as valkyries, Nancy merges fiction and solid evidence which captures the reader’s interest.

Nancy not only provides the evidence for warrior women, She then imagines just how a Viking woman could have lived.

In order to humanise the skeleton found in Birka, Nancy names the body from Bj581 Hervor, which translates to something like ‘Aware of Battle‘, after the warrior woman from the old Norse poem Hervor’s Song. Nancy begins each chapter with a fictionalised story, a bit of what Hervor from burial Bj581’s life could have been like, based upon the historical, textual and archaeological evidence provided throughout the book. Nancy not only provides the evidence for warrior women, she then imagines just how a Viking woman could have lived during the time of Bj581’s life. I found it incredibly fascinating and enjoyable to read how the physical evidence may have been interacted with during the Viking Age, in addition to these imagined sections being a breath of fresh air amidst a detailed and well-researched book. One thing that annoyed me through this book was when ‘an archaeologist states,’ or an ‘expert historian says…’ I’d love to know which one.

Not only does Nancy debunk common beliefs that Viking women were buried with keys which signified their role as housewives, (whereas men were buried with weapons which signified their roles as warriors, raiders and traders), she exposes the bias placed onto the sagas, poems and written sources we have of the Viking Age which were all written a few hundred years after the fact. These biases come from both the values of Victorian society and Christianity, where women were confined to the home. These strict gender lines, as shown through the extensive historical and archaeological evidence provided by Nancy, simply were not there during the Viking Age. Looking at Viking women’s graves alone shows how weapons were more commonplace than keys. I loved the incorporation of other female warriors which we know of from poems and saga’s, as well as historical Viking queens detailed in concurrence with archaeological evidence found throughout the Viking world. Going into detail about clothing, textiles, trade, architecture, boats, social hierarchies, Norse legends, historical and mythological figures and everything in between, no stone is left unturned in this detailed look at the importance of women, their roles, and their importance in the Viking world. If you’re interested in relearning everything you think you know about women, queens and female warriors in the Viking Age, then you should definitely pick this book up.

This review was first published on Kell-Read.