‘Deep diamonds’ made from dead plants and animals


One man’s trash is another man’s treasure, as the old adage goes.

Now, a group of Australian scientists believe the phrase has taken on new meaning after discovering the Earth has been recycling waste — and turning it into diamonds.

The peer-reviewed research, led by Curtin University, found the Earth’s deepest diamonds were commonly made up of former living organisms, such as dead plants and animals, that had been recycled more than 400 kilometres below the surface.

But these aren’t just ordinary diamonds, like those mined in Russia to make fancy engagement rings.

The diamonds featured in this study are buried hundreds of kilometres under the ground, in the Earth’s crust underlying oceans and deep inside continents.

So how do they get there?

A 1,174-carat diamond unearthed in Botswana trumps another huge precious stone found in the country only a month before.

“The Earth is very dynamic and we have what we call ‘subduction zones’ where you have two tectonic plates colliding,” he said.

“The tectonic plate going down brings organic material deep into the Earth.

“That’s why we call it recycling.”

Dr Doucet said the researchers discovered “deep diamonds” formed in the Earth were predominantly made up of organic matter from dead plants and animals.

“This research discovered the Earth’s engine actually turns organic carbon into diamonds many hundreds of kilometres below the surface,” he said.

“While recycling is becoming a modern-day necessity for our sustainable survival, we were particularly surprised to learn, through this research, that Mother Nature has been showing us how to recycle with style for billions of years.”

Typical diamonds formed deep underground when there was lots of carbon and immense pressure.

How do we find these diamonds? 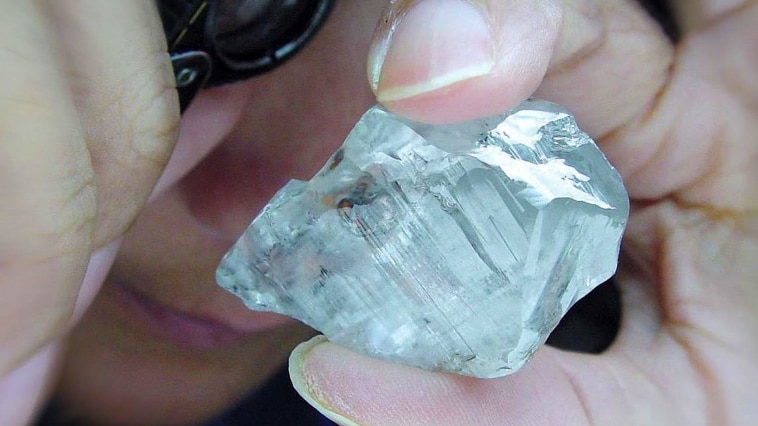 The new owners of what will be the country’s only operating diamond mine hope to restart production within 24 months and “put Australian diamonds back on the map”.

During some volcanic eruptions, hot rocks can shoot up from the Earth’s deeper mantle and sometimes bring deep diamonds with them, he said.

“These types of volcanoes are catastrophic,” Dr Doucet said, adding it could happen both underwater and on land.

“They are huge explosions that usually come from very deep and bring diamonds up to the surface.”

One so-called “super-volcano” lies underneath Yellowstone National Park in the US state of Wyoming.

Its last eruption occurred some 664,000 years ago.