British Police Forces in the United Kingdom are examining the advantages of adding electric cars to their fleets. Ford’s Mustang Mach-E seems to be the overwhelming preference currently. The Detroit-based automaker revealed a customized variant of its first EV at the Emergency Services Show in Birmingham. The Mach-E present at the event was outfitted with the typical yellow and blue emergency vehicle design, and Metro Police Forces in London are requesting a unit for evaluation, as it could be added to the fleet.

In recent years as EVs have become more mainstream and their financial benefits have become more obvious through years of operation, Police Departments across the globe have decided to ditch one or two of their combustion engine vehicles in favor of fully electric models. Several departments in the United States, including Fremont, California, Westport, Connecticut, and Hastings on Hudson, New York, have all added Tesla vehicles to their fleet. The Boulder County, Colorado Sheriff’s Office recently added a Model Y to its fleet, already seeing massive savings just a week into operation. 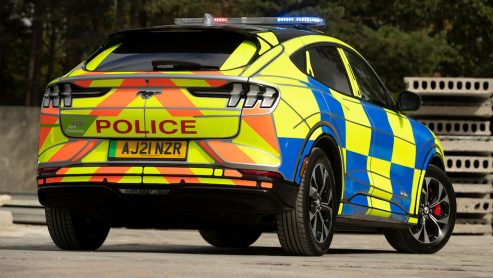 The Mach-E has been added to a fleet in Ann Arbor, Michigan, where the department there purchased two units for operation. However, Metropolitan Police near London could not get enough of the Mach-E, according to Fox, who stated that officers are interested in evaluating the Mach-E for police work.

The Standard Range model of the Mach-E presented at the Emergency Services Show was outfitted with an auxiliary bank of buttons below the large center touchscreen, showing the vehicle can operate with all of the standard police equipment that is necessary for a shift. The Standard Range trim of the Mach-E only packs 211 miles of range per full charge, but the Mach-E has longer range versions available that can provide up to 305 miles of range. With additional equipment installed in the vehicle for police work, some expressed concerns about the low range of the Mach-E and whether things like lights, sirens, and additional computers would drain the battery faster than anticipated.

Blue Light Direct Sales Manager, Ford of Britain and Ireland Terry Adams, said: “The vehicle range is uncompromised as the blue light equipment is being drawn from the vehicle’s 12V battery and not the drive battery. In future developments, we will look to increase this battery capacity to allow for additional equipment to be fitted.”

Whether the Department decides to transition to electrified vehicles for its fleet remains to be seen. However, the addition of a Mach-E seems to be a smart move, especially as lack of maintenance costs and the lack of gas station visits will save the Department money. An in-depth breakdown of the Westport PD’s Model 3 cruiser showed tremendous savings through two years, so EVs are undoubtedly a smarter option for financial savings; it just depends on which model is chosen.