A HEROIC bus driver has been praised after he saved a dog who escaped onto a motorway.

Oxford Tube driver, Richard Pimm, was driving his coach down the M40, near junction five, on Saturday night when he noticed a Labrador running down the outer lane.

Mr Pimm said: “I was going out about my business, picking up my passengers and driving down the motorway – the next minute all the traffic started skidding.

“I was wondering what was going on – being a bit nosey – and then I saw the dog in the outer lane.

“I am a massive dog lover, and even though I had 50 people on my coach, and I had to think about their health and safety, I pulled the coach over into the hard shoulder and told my passengers I had to go get this dog.

“I could not let it get killed and no one else was bothering to pull over and help the dog.”

Mr Pimm managed to stop the oncoming traffic, get Paddy, an award-winning Red Fox Labrador, safely onto his bus.

He said: “The police were uninterested as there was no accident, and all I knew is that I had 50 passengers on my coach and the hard shoulder was not a good place for us to be.

“So, I took Paddy to London with me, and he brought all the passengers together.

“People were Facetiming their families to show the dog, someone found a bottle of water and another person found treats in their bag.

“He was a bit shaken up, but he seemed really well trained.”

After they arrived in London, Mr Pimm took Paddy on a walk before getting him back on the coach to return to Oxford.

At the end of the driver’s shift, he decided the best option would be to take Paddy to the vet to see whether he was microchipped.

Mr Pimm said: “It turned out he was microchipped, and it killed me to leave him, especially as was hoping he wasn’t so I could keep him.”

Paddy was soon reunited with his family – who travelled from Stokenchurch in Buckinghamshire to pick him up.

Read here: Road speed limit could be reduced after parents fear children are not safe

Ryan Porter, the dog’s owner, said: “Our two dogs had jumped our fence – even though it is 6ft tall. 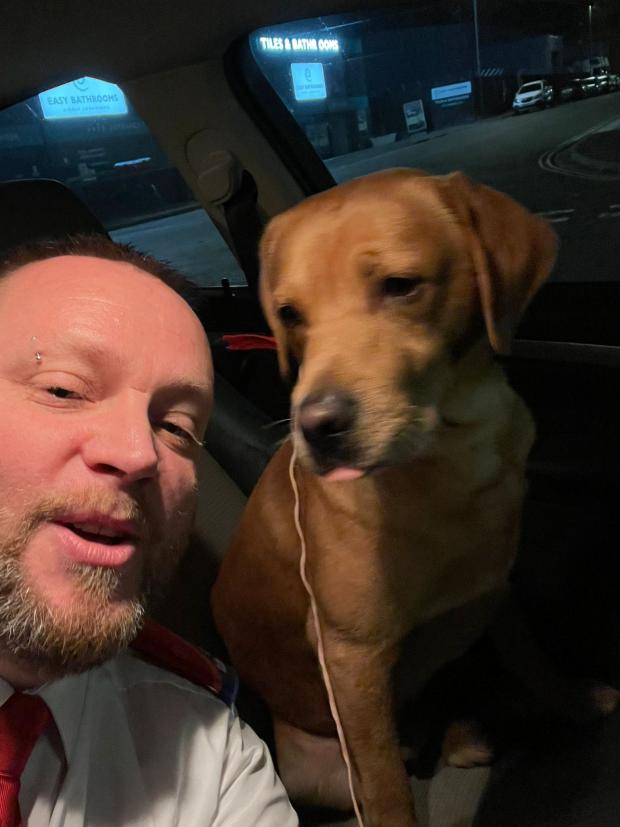 Richard and Paddy on the Oxford Tube

“We spotted Luna, my other dog, on the road within five minutes but we couldn’t see Paddy anywhere.

“We looked in the woods, on the motorway, and it wasn’t until we got a call from the vet at midnight that we stopped searching.”

Paddy’s owners said he was not fazed when he returned and praised Mr Pimm for all of his help.

Mr Porter added: “I was amazed by what he did.

“My wife thinks the world of that dog, and so do my two kids.

“It would have broken out hearts if we had never found him again.”

The pair are now hoping to write a book about Paddy’s adventure that day.

Rachel Geliamassi, Managing Director at Stagecoach in Oxfordshire, said: “Our drivers work hard every day to serve our community but it’s times like these that really shine a light on just how fantastic our team members are.

“I speak on behalf of everyone at Stagecoach when I say that we are very proud of Richard for going above and beyond to reunite Paddy with his owners.”