Residents reveal the ‘unbearable’ living conditions next to a noisy Strathfield, Sydney worksite


Weary families have been forced to endure ‘unbearable’ living conditions after a noisy construction site began operating metres from their homes, with 16 huge trucks ploughing past their windows every hour.

Tenants living in the 12 heritage-listed homes on Welfare Street in Strathfield in Sydney’s Inner West have said the constant racket has become insufferable.

Frustrated homeowners under siege by the giant worksite say the deafening sounds of machinery is affecting both their physical and mental health.

Families say the situation has become ‘unliveable’ as the construction of a huge warehouse distribution centre continues unabated despite them begging the council for help.

Scroll down for video

‘Our lives, totally ruined. We are very upset with no hope and we don’t know who can help us,’ resident Echo revealed to A Current Affair.

The crux of the homeowners’ distress is their suburban street being used as a thoroughfare for large trucks to deliver cement and materials to the worksite.

Multiple tenants have suggested to Strathfield Council that the access point to the site be relocated to the nearby Parramatta Road.

Fed-up residents say around 16 trucks an hour plough past their homes causing them to shake, disrupting precious work, sleep and leisure time.

The worksite will soon become the location of a new warehouse distribution centre that backs directly on the fence of residents’ Lingli and Ivan.

Once the build is complete, long-suffering residents will get no reprieve from the racket as the distribution centre is expected to operate 24/7.

The construction company has made efforts to placate homeowners Echo and Edward in the form of a four-metre fence.

However Echo says the measure has only made matters worse as the towering fence blocks vital sunlight from reaching her garden – and naturally makes no difference whatsoever to the noise.

Tenants Babita and Binod say their children used to enjoy playing in the street but with the presence of heavy machinery it is no longer safe to do so. 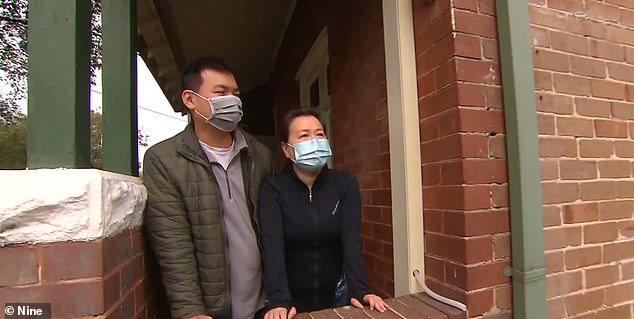 Binod claimed the site was set-up without consulting any residents and said by the time they had caught on to the plan, it had been too late.

Strathfield Council has released a statement on its site in which it stated the construction of the Homebush complex was approved by a ‘private certifier’.

It said council approved the 24/7 use of the units 1 to 4 with strict conditions in place, including a limitation on noise and a ban on trucks driving at night.

‘Additionally, the area is Zoned B6 ‘Enterprise Corridor’ which permits this type of Development and Use,’ it stated in relation to the controversial access point.

Strathfield Council said it would continue to work with ‘all parties to reach outcomes that benefit the whole community’.

A statement from the Department of Planning, Industry and Environment stated the Strathfield Council assessed the project and recommended to the panel it be approved with conditions.

‘Part of that process includes members of the community having a final say at the panel’s meeting prior to it making its decision,’ the department said.

One resident has created homemade posters to silently protest the unbearable sounds coming from the worksite.

Tenant Benjamin spray-painted the words ‘living in darkness’, ‘children in danger’ and ‘say no 24/7 noises’ on the signs and set them up outside his home.

To add salt to the wound, homeowners say while the construction site was given the green light, any changes to their heritage-listed homes is forbidden. 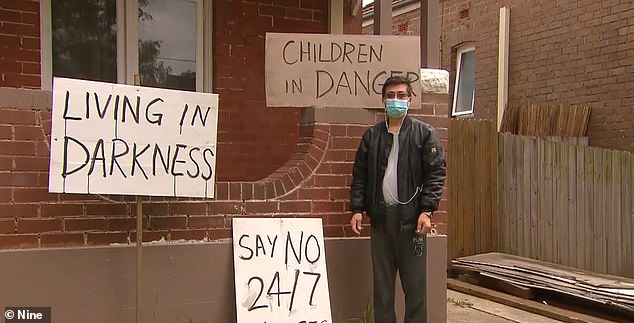 Tenant Benjamin spray-painted the words ‘living in darkness’, ‘children in danger’ and ‘say no 24/7 noises’ on pieces of plywood that have been positioned outside his home (pictured)

‘Because we have this conservation restriction we cannot knock down, we cannot rebuild, we can’t change any feature of those heritage houses,’ Lingli explained.

As the land around the pocket of 12 homes is snapped up by industrial and commercial sites, the residents are left with only one option.

Tenants say if the heritage order is lifted they can sell to hungry developers and put the living hell of the worksite behind them.

Lingli admitted she couldn’t expect anyone else to endure the deafening sounds of the street when she was barely coping herself.

In a small win for the frustrated homeowners, an independent planning review committee organised by council recommended the heritage order is removed.