In case you hadn’t been reminded, or reminded Arsenal fans you know, every day, Arsenal spent the international break at the bottom of the Premier League table, having failed to even score a goal in their opening three games.

Despite spending the most money of any side in Europe, the Gunners have found themselves on the end of 2-0 defeats to Chelsea and Brentford, as well as suffering a 5-0 humiliation at the hands of Manchester City in their most recent fixture.

Which club had the best summer? 🤝

In turn, pressure on Mikel Arteta is building, and a home match against Norwich (who sit level with Arsenal on zero points but have scored a goal) this weekend has suddenly become a must-win affair.

Fortunately, the Gunners should be blessed with a fully-fit squad, following the Covid-19 outbreaks and injury woes they have suffered to date, and should be able to get their season up and running after the international break. But could the cracks run deeper?

Matt Le Tissier has his say

Speaking on the Where’s Jeff podcast, ex-Southampton forward Matt Le Tissier spoke about information received from “a contact inside the Arsenal camp”.

And he suggested that the problems run far deeper than manager Mikel Arteta, revealing:

“There is a lot of disharmony in the changing room and that’s something which is very difficult for a manager.

“Even though it might be the players fault, we always know what happens when things goes wrong, and it’s always the manager who carries the can.”

It seems then, as though the age-old problem of squad disharmony has continued at Arsenal, despite the departures of high-profile names like Mesut Ozil and Sokratis in recent seasons.

How much will this be evident this season?

Marc Overmars happy to stay at Ajax amid Arsenal speculation 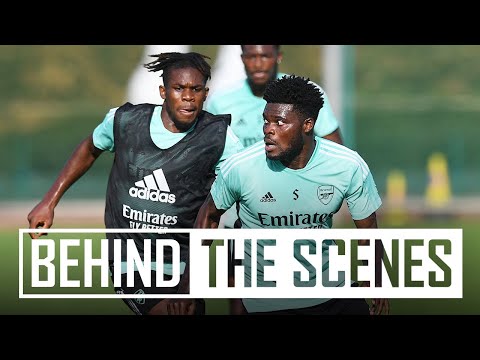 Welcome back, Thomas Partey! | Behind the scenes at Arsenal training centre