Neddy Smith’s long-time lawyer has revealed how he witnessed a man claiming to be a cop try to kill the notorious gangster while he was incapacitated in an ambulance outside court.

The ‘policeman’ was fiddling with equipment inside the vehicle and only fled when confronted by a prison officer who pulled out his gun and threatened to shoot him.

Top Sydney silk Winston Terracini said the man in the ambulance clearly had ‘evil intent’ and it was the closest Smith’s enemies ever came to killing him while he was in custody.

Mr Terracini, who has not previously told the story publicly, revealed the details to Daily Mail Australia after 76-year-old Smith died in Long Bay jail on Wednesday.

Neddy Smith’s long-time lawyer has revealed how he witnessed a man claiming to be a cop try to kill the notorious gangster while he was incapacitated in an ambulance outside court in 1996. Smith is pictured with his then wife Debra and daughter Jaime in the 1990s 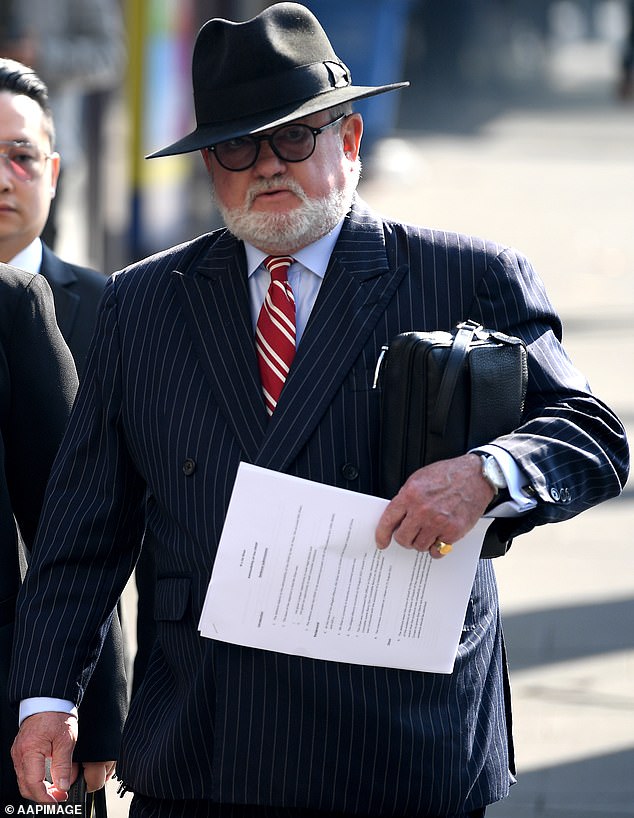 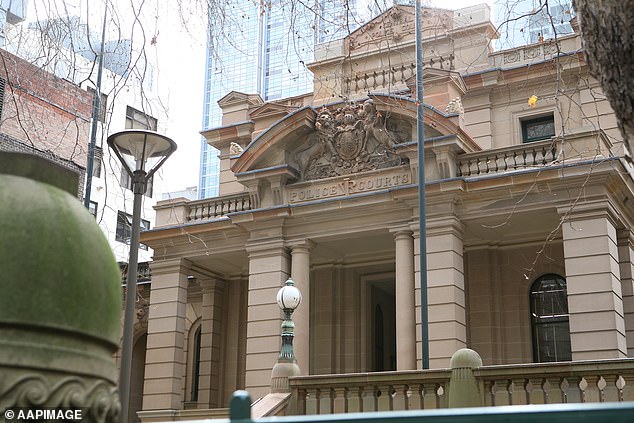 The then 52-year-old prisoner had been facing Central Local Court in Sydney’s Liverpool Street for a marathon committal hearing over seven murder charges in 1996.

Those charges were based on supposed confessions Smith made to a heroin-addicted cellmate and police informant who Smith claimed had been sent to frame him.

The drug dealer and armed robber was already serving a sentence for killing towtruck driver Ronald Flavell in 1987 but could have one day expected to be released.

Four years earlier Smith had given evidence against serving and former New South Wales detectives at an Independent Commission Against Corruption inquiry into the relationship between police and criminals.

The ICAC inquiry had not resulted in large-scale prosecutions but the subsequent Wood Royal Commission into police corruption was in full swing and Smith was viewed as a dangerous informant by bent cops and crooks.

Smith, who suffered Parkinson’s disease for the last 40 years of his life, took a severe turn in Central Local Court and was rushed to an ambulance at the side of the building.

‘Neddy had to be almost carried out of the court room that day,’ Mr Terracini said. ‘I was just packing up some things and then I got an urgent call to go out and see him. 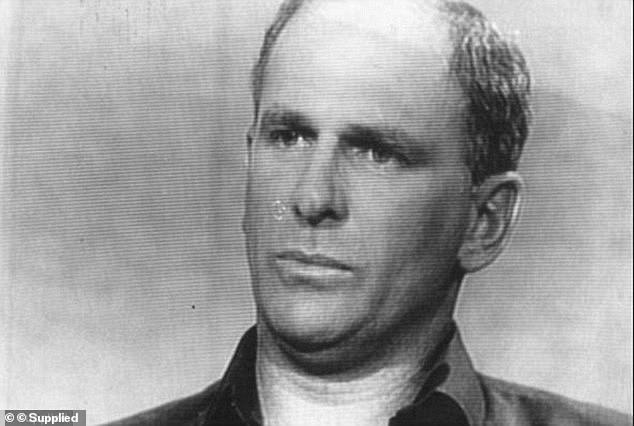 Smith was a major heroin distributor in Sydney and e once claimed to be a cash millionaire. While dealing narcotics he was also pulling off brazen armed robberies worth hundreds of thousands of dollars at a time. He is pictured in a television interview 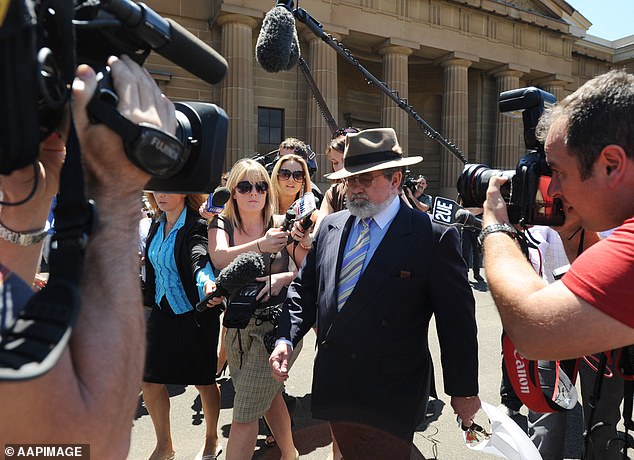 Mr Terracini said a Corrective Services officer confronted the man in the back of the ambulance with Smith and told him: ‘Move away from my prisoner or I’ll blow you away’

‘There was a man who claimed to be a police officer halfway into the back of the ambulance, fiddling around with things, claiming that he was trying to help Ned.

‘He was dressed like he was a detective. He was trying to reach over and either pull out or turn off some of the equipment in the ambulance.’

Mr Terracini said at that moment one of Smith’s regular Corrective Services escort officers, a wiry Scottish ex-soldier, appeared and challenged the man.

‘He came from nowhere and he yelled out, “Get out! Get out!” There was no response and then he pulled out his Smith & Wesson and pointed it at this bloke.

‘He said, “Move away from my prisoner or I’ll blow you away”.

‘This bloke pretending to be a police officer trying to help Ned disappeared into the ether but he’d obviously been sent to do a job.’

Mr Terracini said he had not seen seen any paramedics in the vehicle. ‘I didn’t see any ambulance officers at all. Whether they were in the front or they’d gone to get something I don’t know.’

Concerned for his client’s safety, he had asked court staff about the man who fled from the ambulance. ‘I was pretty hyped up and annoyed – “Who the hell is this bloke?”,’ he said. 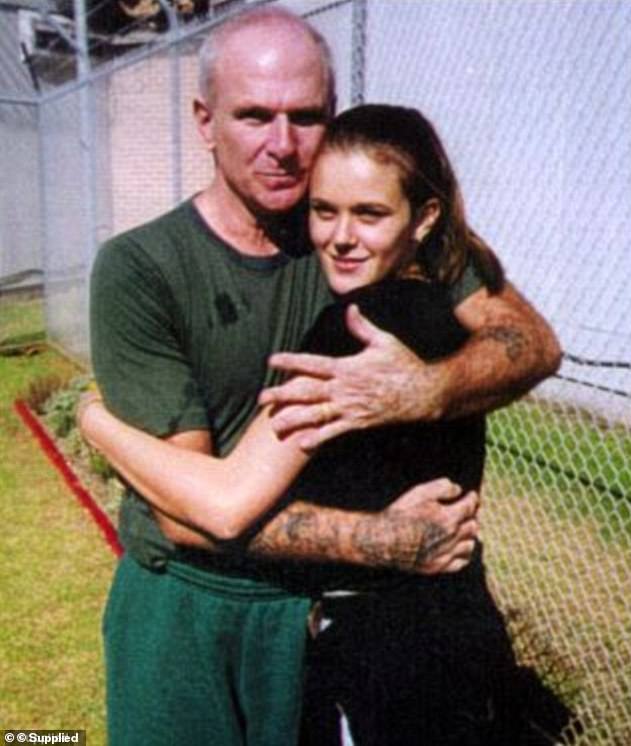 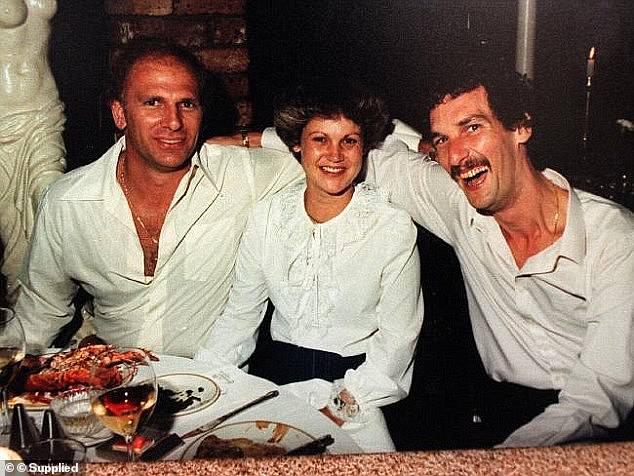 Smith, whose crimes spawned an award-winning television series and made him the most infamous crook in Australia, was serving life for murder. Smith (left) is pictured with ex-wife Debra and brothel keeper Harvey Jones, who he was convicted of having murdered in 1983

‘I spoke to at least two people as to why he was allowed in the back area near the ambulance. That’s the point that really alarmed me.

‘When I asked people associated with the court administration they said, “He’s a police officer”.’

Mr Terracini said he had never learnt the identity of the man but had no doubt about his reason for being in the back of the ambulance.

‘He might have been a copper – it would suit their purposes if he was, I suppose. But he certainly had evil intent, there’s no question about that.

‘That’s the closest I think that they got to killing him.’

Smith died at Long Bay Hospital about 5.20pm on Wednesday having spent most of his adult life in prison.

He had once claimed to be a cash millionaire and was a major heroin distributor in the 1970s and 1980s while pulling off brazen armed robberies.

But the man who wreaked havoc across Sydney as a violent villain also helped reform the NSW Police Force from inside jail, according to Mr Terracini. 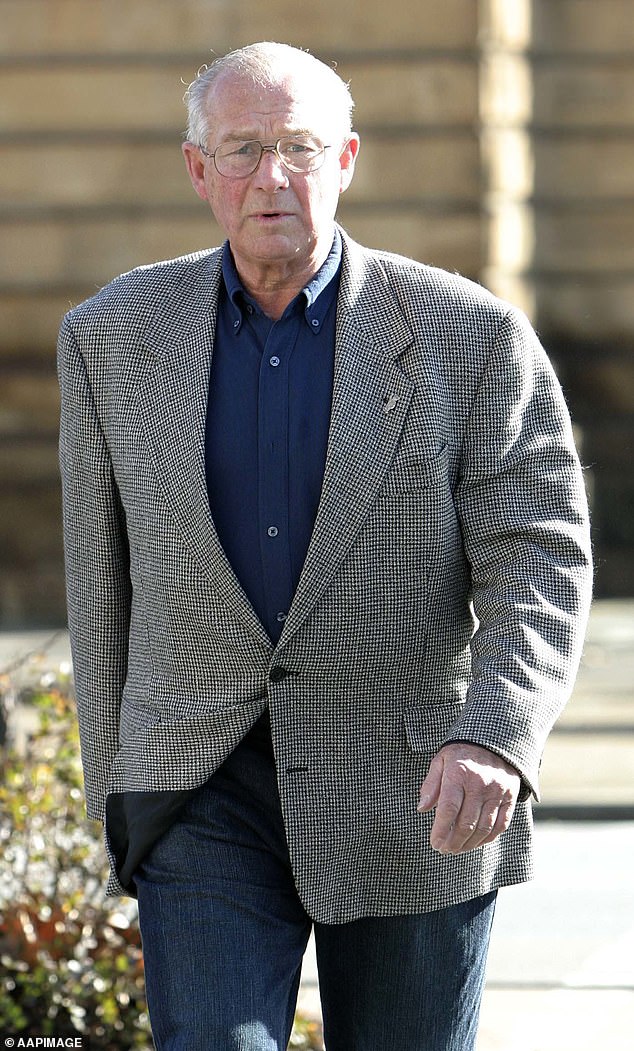 Smith’s long relationship with the since disgraced detective sergeant Roger Rogerson caused both men ongoing difficulties and was portrayed in the award-winning television series Blue Murder. Rogerson (left) is serving life for the murder of 20-year-old drug dealer Jamie Gao

Smith’s long relationship with the disgraced detective sergeant Roger Rogerson helped bring both men down and was depicted in the award-winning television series Blue Murder.

Mr Terracini first acted for Smith after he told ICAC’s corruption investigation that dishonest detectives had given him the ‘green light’ to commit major crimes.

‘Of all of the persons that I’ve acted for from being a law student until now he was the most extraordinary character of that type that I’ve come across,’ Mr Terracini said.

‘He had a bifurcated personality. He could be at once plainly very evil and brutal but had a sense of justice for a a lengthy period of his life.

‘One can’t deny his criminal record. He had a disposition for violence, he was involved in very serious crimes. 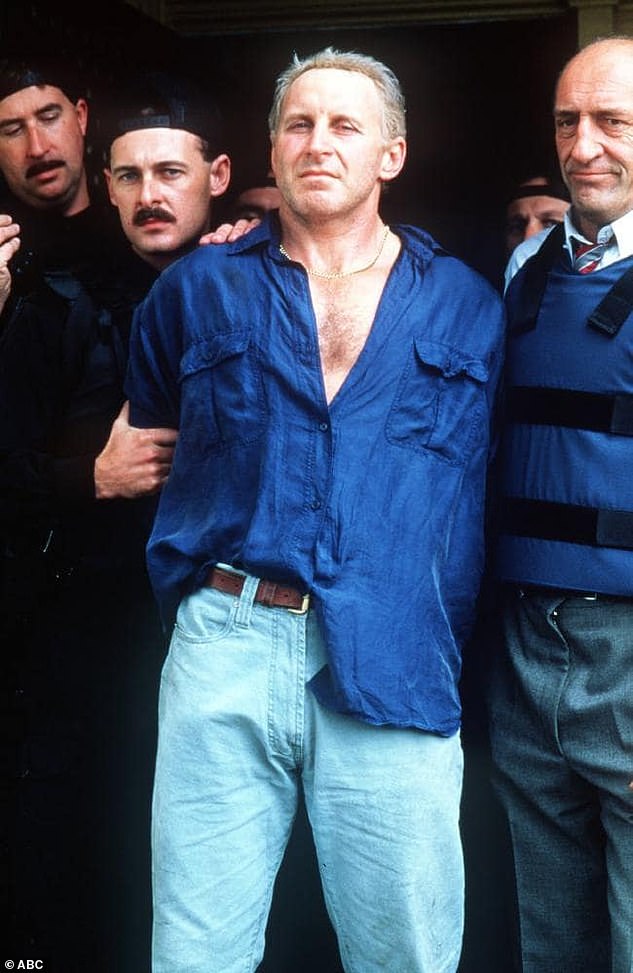 Smith was played by Tony Martin (pictured) in the ABC television series Blue Murder. The show screened in most Australian states in 1995 but was banned for years in NSW while Smith’s murder charges moved through the courts. Smith said Martin was too short to play him

‘But you’ve got to weigh that up with the fact that he provided an immense amount of information and background to honest authorities who used it to root out very significant numbers of corrupt police for the first time effectively in the history of the NSW Police Force.

Mr Terracini said he believed Smith had genuinely tried to help authorities clean up police corruption and he left a legacy beyond his appalling crimes.

‘Ned would often say to me with a grin it was the best police force that money could buy,’ he said.

Only by a discredited criminal coming forward to disclose his close relationships with bent cops had widespread corruption been exposed in the end.

‘You cannot get the information that Ned was capable of providing unless you mix in the dishonest and disreputable circles that he mixed in,’ Mr Terracini said.

Smith was a suspect in the 1981 disappearance of Brian Alexander, who he was depicted in Blue Murder throwing off a boat while the law clerk was chained to an Early Kooka stove. He is pictured on the day he married Debra Joy Bell at Long Bay in 1980

‘He could never have become a criminal of such partial success unless he was actively encouraged and controlled by the disgraceful criminals living within the heart of a corrupt police force.

‘These wretched characters anointed and touched him with their infected and corroded values that permeated to all levels of the State of New South Wales.

‘They claimed to be brave and honourable men but supplied drugs that killed people, committed armed robberies, protected paedophiles and killed people, hiding like cowards behind a tainted badge.’

Mr Terracini said Smith had admitted many of his criminal activities, while corrupt police had run for cover when he gave evidence against them.

‘The minute that Ned started to give information to authorities an enormous number were sprinting to see their union reps at a speed approaching Olympian standard so that they could qualify for the pension,’ he said.

‘They may well be still masquerading to their friends and families on their pensions but they know who they are.’ 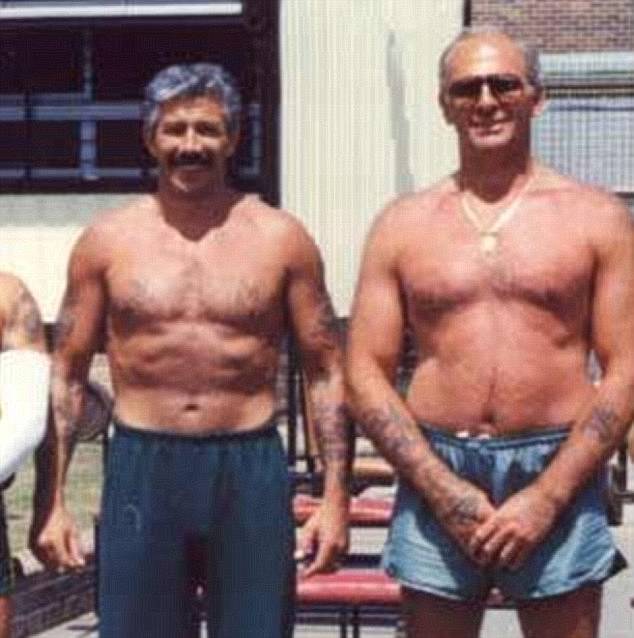 Smith (right, with former partner in crime Graham ‘Abo’ Henry) had been in prison for more than 30 years, serving sentences for two 1980s murders he has always denied committing. He spent a further decade behind bars during three stints in the 1960s and 1970s

Smith was acquitted in 1999 of killing Huckstepp after the Chubb, McCann, Croft and Sandery cases were dismissed at committal. The Shu case was no-billed.

He was convicted of murdering Jones and jailed for life in 1998 without the possibility of parole.

‘Out of all of those he was convicted of one,’ he said. ‘He was acquitted or discharged for more murders than anybody in the history of NSW.’

Smith was a suspect in the 1981 disappearance of Brian Alexander, who he was depicted in Blue Murder throwing off a boat while the law clerk was chained to an Early Kooka stove. 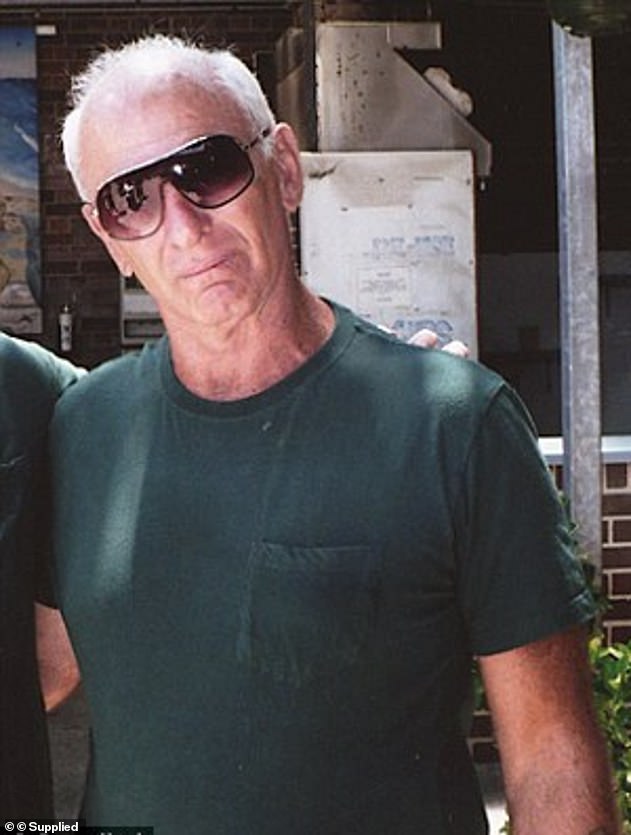 Smith was a intimidating presence in his prime but could be charming company. In his heyday he socialised publicly with senior police, judges, prominent businessmen and well-known entertainment figures

He was also a suspect in the murder of model and cocaine dealer Mark Johnston, who disappeared in 1986 and whose remains were found in 2007 not far from those of Jones.

Smith was never charged with killing Alexander or Johnston but was interviewed about both. He was also interviewed in relation to the 1985 disappearance of hitman Christopher Dale Flannery.

The murders of Chubb, McCann, Croft, Sandery, Shu and Huckstepp all remain unsolved.

Smith was diagnosed with Parkinson’s disease in 1981 and his health had deteriorating rapidly in recent years.

It was reported more than 15 years ago his paralysis from Parkinson’s was so advanced he could not write, climb stairs or brush his teeth without an electric toothbrush.

A Corrective Services NSW spokeswoman said Smith’s death would be the subject of a coronial inquest.