After the Abdication, the Duke and Duchess of Windsor led rich, bored lives


BOOK OF THE WEEK

TRAITOR KING: THE SCANDALOUS EXILE OF THE DUKE AND DUCHESS OF WINDSOR

Reading about their self-indulgent lifestyle in post-Abdication exile, it’s pretty clear that the Duke and Duchess of Windsor were a nauseating couple: he petulant, shallow, bored out of his mind and half-drunk on the golf course by teatime; she spoilt, shopaholic and demanding, insisting that her butler have a house telephone next to his lavatory so he was truly on call ‘at all times’.

But were they also traitors to Great Britain? This is a question addressed by Andrew Lownie in his darkly compelling new book. As well as portraying the Duke and Duchess as people who thought only of themselves, Lownie argues that the Duke was more than merely naive in his enthusiasm for the Nazis: he was also, in 1940, in league with the Germans to an extent that amounts to treason.

The evidence is elusive, as vital documents were lost or covered up, but the gist is that German Minister for Foreign Affairs Joachim von Ribbentrop’s plot was to force England to peace and then, in Lownie’s words, to ‘accommodate any desire expressed by the Duke, especially with a view to the assumption of the throne by the Duke and Duchess’.

Andrew Lownie has penned a compelling book about the Duke and Duchess of Windsor (pictured), who seemed to be fraternising with rich pro-Nazis after the Abdication and throughout the war

What Lownie calls ‘the killer telegram’ was a coded one sent by the Duke to a pro-German Portuguese friend, Ricardo Espirito Santo, in August 1940, ‘at the height of the Battle of Britain when Britain was fighting for its very survival’. Backed up by plenty of evidence including the diaries of an MI5 officer, it reveals him to be an active player in the plot. Indirectly, the Duke was communicating with the Germans, asking them to tip him off as to the right moment to return to Europe and take the throne in what would be a new world order.

‘If genuine,’ Lownie writes, ‘as it almost certainly was, this was communication with a known foreign agent during wartime, which meant that the Duke could have been prosecuted under the 1940 Treachery Act.’

Thank goodness that, with hindsight, the de-Abdication of Edward VIII now seems a very far-fetched scenario.

Many authors have chronicled the unfolding drama leading up to the Abdication — notably Alexander Larman in his excellent The Crown In Crisis of last year. Lownie, refreshingly, starts on the evening of Abdication Day and takes us from there, into the hoped-for sunlit uplands of the couple’s happy ever after — which turned out to be nothing of the sort.

When the Duke, stripped of his status, sailed from Portsmouth on that chilly December night, the couple were cast into outer darkness by the Royal Family. An entitled, disgruntled royal couple living in luxury in exile, desperate for attention? Remind you of anyone? Lownie does not mention Harry and Meghan but (in terms of their lifestyle) the parallels keep coming to mind.

Wherever the Duke and Duchess went after the Abdication and throughout the War, they seemed to be fraternising with rich pro-Nazis. First they stayed with (and sponged off) the French pro-Nazi businessman Charles Bedaux, who may well have been paid by Hitler to arrange their notorious trip to Germany in 1937, a coup for Nazi propaganda, during which they had tea with the Fuhrer and gave enthusiastic Nazi salutes. Then, holed up in the Bahamas during the War, they became close friends with the Swedish industrialist Axel Wenner-Gren, ‘Goering’s pal’ — all very worrying for the FBI, who suspected that Wallis was smuggling pro-Nazi messages to the U.S. inside her dry-cleaning. 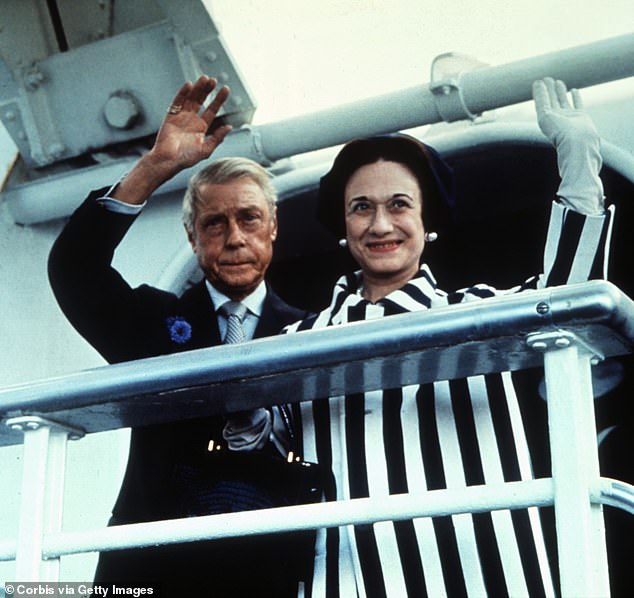 Author claims communication with a known foreign agent during wartime, could’ve meant that the Duke would have been prosecuted under the 1940 Treachery Act. Pictured: The Duke and Duchess of Windsor arrive in Britain as guests of the Queen for the first time after his abdication

For his part, the Duke was incorrigible in his casual dropping of pro-appeasement comments, remarking in an interview in the American magazine Liberty in 1940, ‘There will be a new order in Europe, whether imposed by Germany or Britain.’ To which Churchill responded in a telegram, ‘I could wish indeed that Your Royal Highness would seek advice before making public statements of this kind.’

To which the Duke responded to him that he wished Churchill had not referred to his wife as ‘that woman’.

This was what was at the bottom of it all, one feels: the Duke’s utter fury at his family’s (and Britain’s) cold refusal to accept Wallis and to give her a royal title. Bad feeling was in the air, and it grew over the decades into encrusted resentment and entrenched dislike.

Lownie builds up the picture of this unhappy, restless couple with hundreds of eye-popping details and, quoting from myriad sources, he piles on the sleaze. The Duke was bisexual, apparently, and was (according to Nicky Haslam) in love with Jimmy Donahue, 35-year-old heir to the Woolworths fortune. 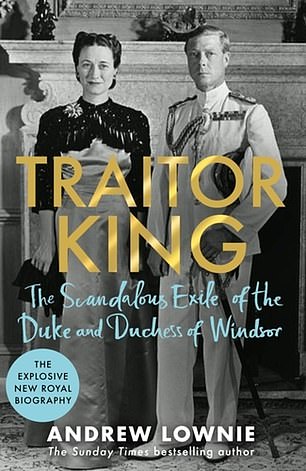 TRAITOR KING: THE SCANDALOUS EXILE OF THE DUKE AND DUCHESS OF WINDSOR by Andrew Lownie (Blink £25, 352pp)

If you believe that a person can be judged on how well or badly they treat their underlings/servants/cleaning lady, Wallis comes across as pretty despicable. Her staff had to bow and curtsey and call her ‘Your Highness’. They worked long hours and she was rude to them, not paying them for overtime and sacking them at will. When their loyal Bahamian butler, who had worked for them for 30 years, asked whether he could leave at 5 pm as his wife had died and he now needed to put the children to bed, Wallis responded, ‘If you go at five, don’t come back.’

He left and did not come back.

Gripping though it is, this is an unrelentingly damning portrait of the Windsors. Yes, they were spoilt, superficial, extravagant, self-pitying and possibly traitorous. But I couldn’t help searching hard for any positive details about them, and there were a few, such as their adoration of their dogs, their consummate gift for entertaining, and, yes, their loyalty to each other through thick and thin.

Lownie is pretty sure that Wallis did not love the Duke; that she just had to sit out a long and tedious marriage, as he’d given up the Crown for it. But we can never be sure, and the photograph of her looking utterly desolate on the day of his funeral suggests otherwise.

Among the book’s photographs, there’s one taken by Jimmy Donahue of the Duke and Duchess wearing paper crowns at a nightclub in 1953. This is presented as a crowning (literally) moment of ridicule: the absurd, demoted king and queen in silly fancy dress. But I was moved by the photo, which proved their ability to laugh at themselves in a world which was laughing at them.