Camilla appeared in high spirits today as she visited a books and arts festival in Nairn during her trip to Scotland.

The royal, 74, who is known as the Duchess of Rothesay when in the country, cut an elegant figure in an emerald green midi dress which she paired with a trendy trench coat as she visited the Nairn Community Centre today.

She could be seen beaming as she spoke with members of the public at the Nairn Book and Arts Festival, including creative writing groups, a local book club and a poetry group.

It comes amid a busy period of time for the Duchess, who yesterday made an impassioned plea for people to support and promote ‘brave’ female journalists in Afghanistan who are facing ‘danger every single day’. 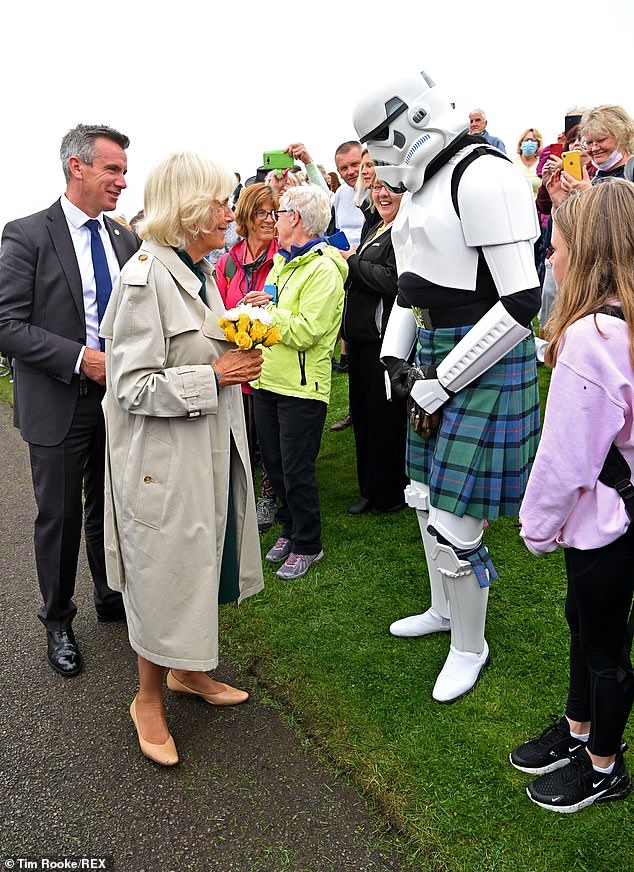 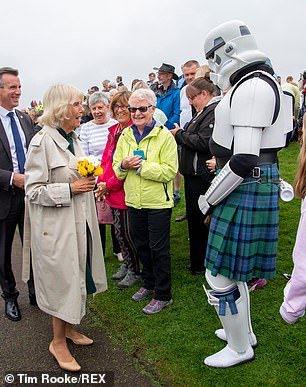 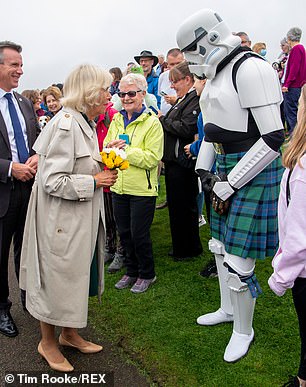 The two chatted while at the event, with the Stormtrooper wearing a blue and green kilt for the occasion 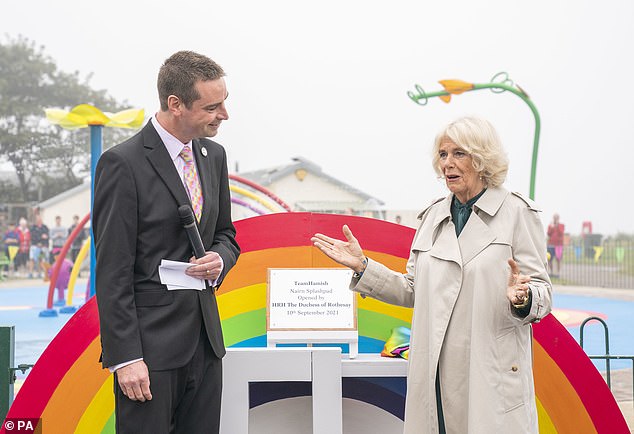 The Duchess of Cornwall, known as the Duchess of Rothesay when in Scotland, with Sam Heys (left) at the opening of the Team Hamish Splashpad

The royal looked relaxed as she arrived at the event, smiling as she greeted royal fans at the community centre.

Camilla’s blonde bob was styled in an impeccable blow-dry, and she sported a dash of blush for a healthy glow.

The royal paired her cream trench coat with a pair of nude heels for the occasion.

Later, the Duchess attended the opening of the Team Hamish Splashpad in Nairn, where she was greeted by crowds of royal fans. 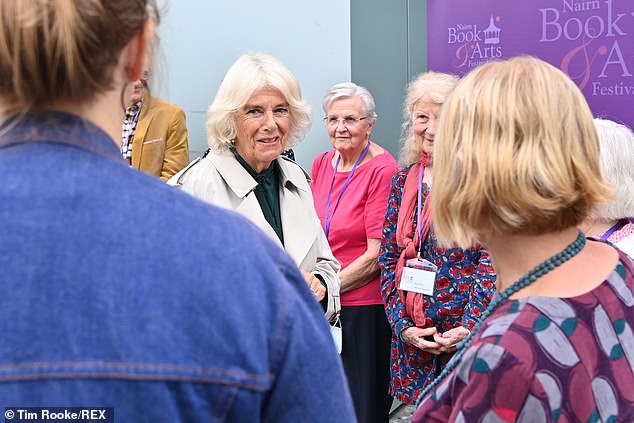 She could be seen beaming as she spoke with members of the public at the Nairn Book and Arts Festival, including creative writing groups, a local book club and a poetry group 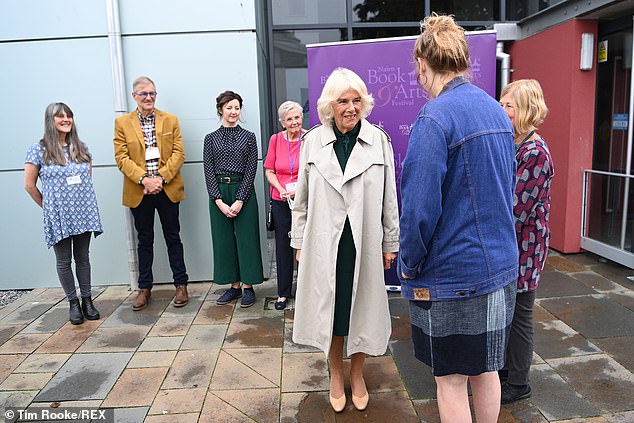 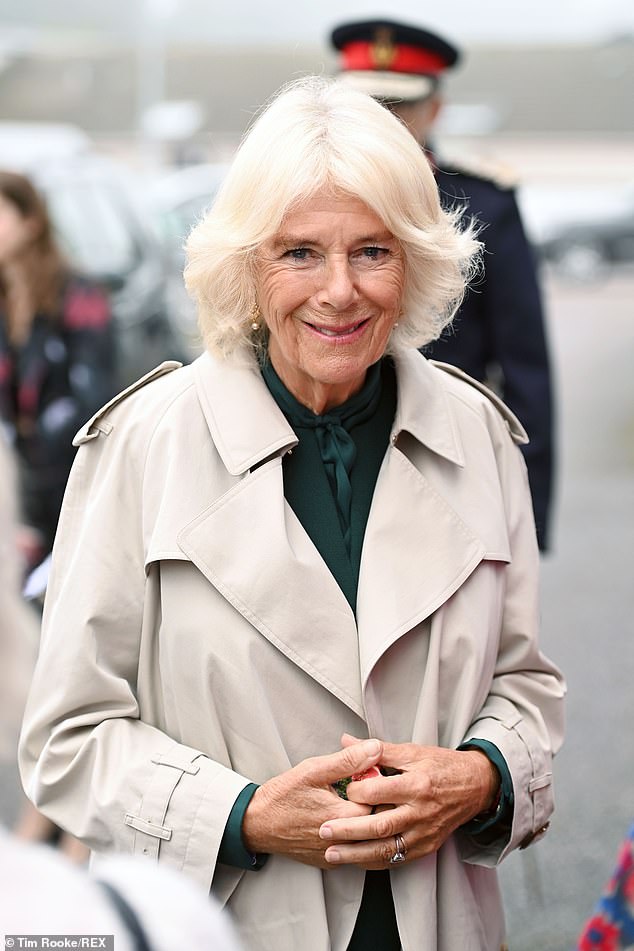 The royal looked relaxed as she arrived at the event, smiling as she greeted royal fans at the community centre

She beamed as she met a Stormtrooper wearing a kilt at the event, before leaning in to speak a young mother and her daughter.

Fundraisers for charity campaign Team Hamish have raised thousands of pounds worth of cash, firstly in memory of Hamish Hey who died in 2017 aged eight from a rare form of cancer, and later for mum, Susan, who passed away in 2020 from breast cancer.

Camilla and the Prince of Wales are carrying out engagements in Scotland this week.

Earlier this week, the Duchess attended a Women in Journalism mentoring session and panel discussion at Dumfries House in Ayrshire. 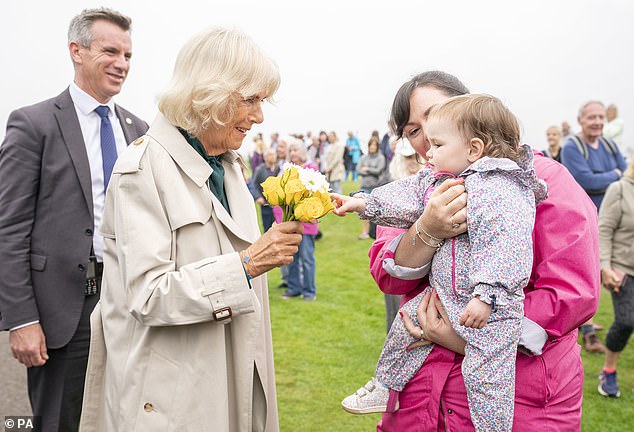 At one stage while attending the charity event in Nairn, the royal could be seen chatting with a young mother and her daughter 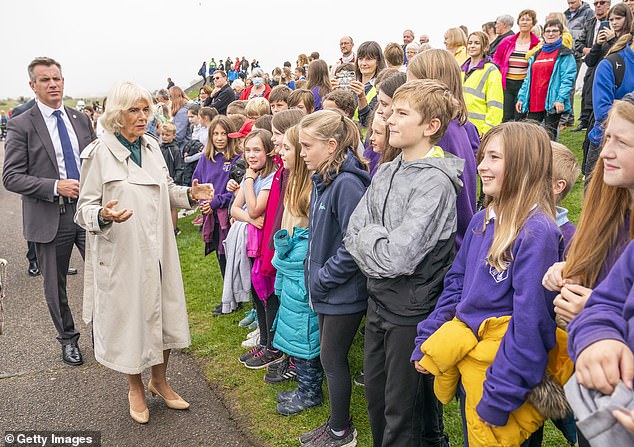 ‘I’ve been reliably informed that in 2020, there were 700 female journalists working in Kabul. Today, there are fewer than 100,’ Camilla said.

‘With the loss of 600 voices, the experiences of countless Afghans will remain untold.’

She added: ‘All journalists who fight for truth and justice in the face of retribution deserve our thanks and admiration.

‘Let’s do all we can to support, promote and, crucially, listen to the brave female journalists of Afghanistan, whose work puts them in danger every single day.’

The duchess was joined by BBC journalist Yalda Hakim who received praised for conducting an interview with a Taliban spokesman when he called her phone while she was presenting live on air in the BBC studio. 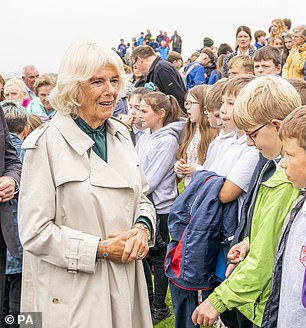 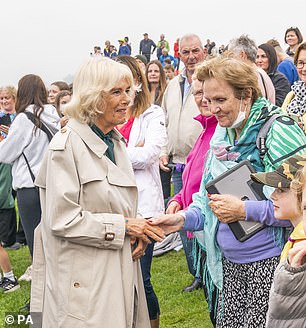 Camilla was swarmed by royal fans at the event in Nairn today, and could be seen chatting to crowds of people 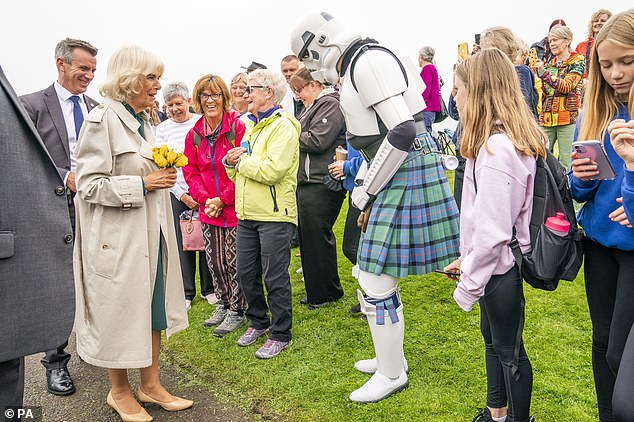 Camilla said: ‘It’s been a particular pleasure to speak to Yalda Hakim, who recently interviewed a Taliban spokesman with such focus and composure.’

Founded by Eve Pollard 28 years ago, Women in Journalism is a not-for-profit organisation that provides guidance and support for its members.

Their refuge accommodation, first taken over in 1997, was built as communal facility.

But thanks to a massive team effort, it has been reconfigured as eight self-contained flats to allow the women – many with children – privacy and dignity. 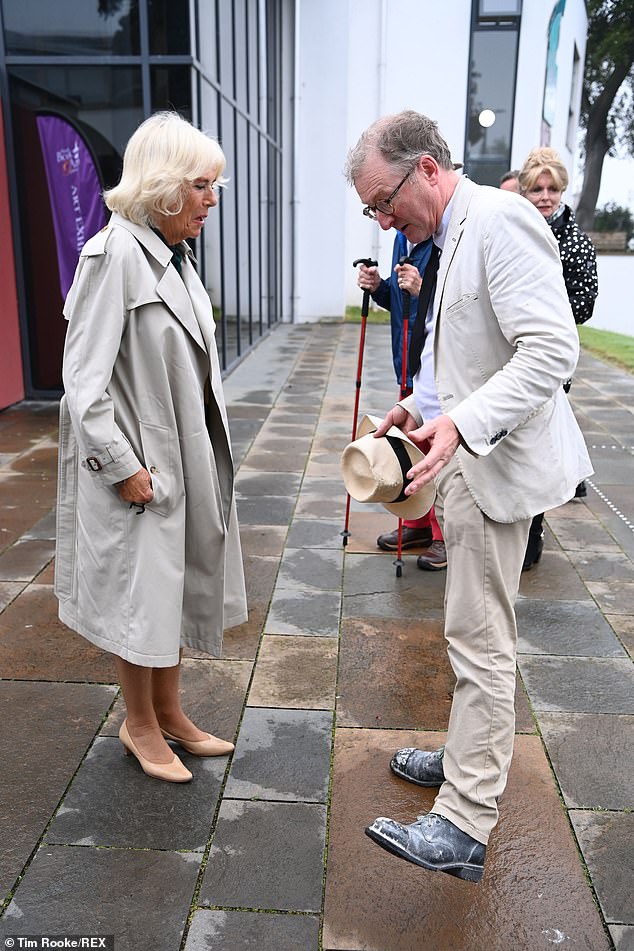 Camilla and the Prince of Wales are carrying out engagements in Scotland this week (pictured, speaking with Lord-Lieutenant of Nairnshire, Mr George Asher on arrival at Nairn Community Centre) 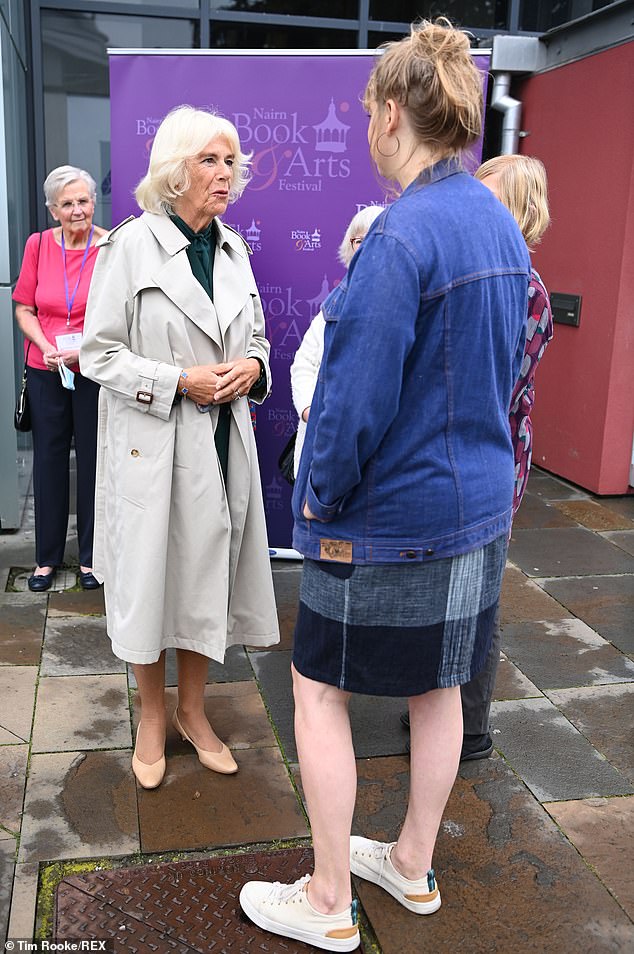 The royal also spoke with staff from the environment charity, Green Hive, during her trip to the centre this morning

Speaking assuredly off the cuff – joking she would use ‘any excuse to take off my mask’ – Camilla said she wanted to congratulate them on the ‘brilliant’ work they had done.

‘I know how important these refuges are. I have seen quite a lot all over the country. But to see these separate accommodation, these flats….it’s the first time I have seen those.

‘And talking to some of the ladies here I know what a difference it makes to them to have a bit of privacy,’ she said.

‘Again I would like to ret-iterate what an incredible job you all do for violence against women. It is so important to have all of you on side. Others might take a lead from your book and do the same in other parts of the country. ‘ 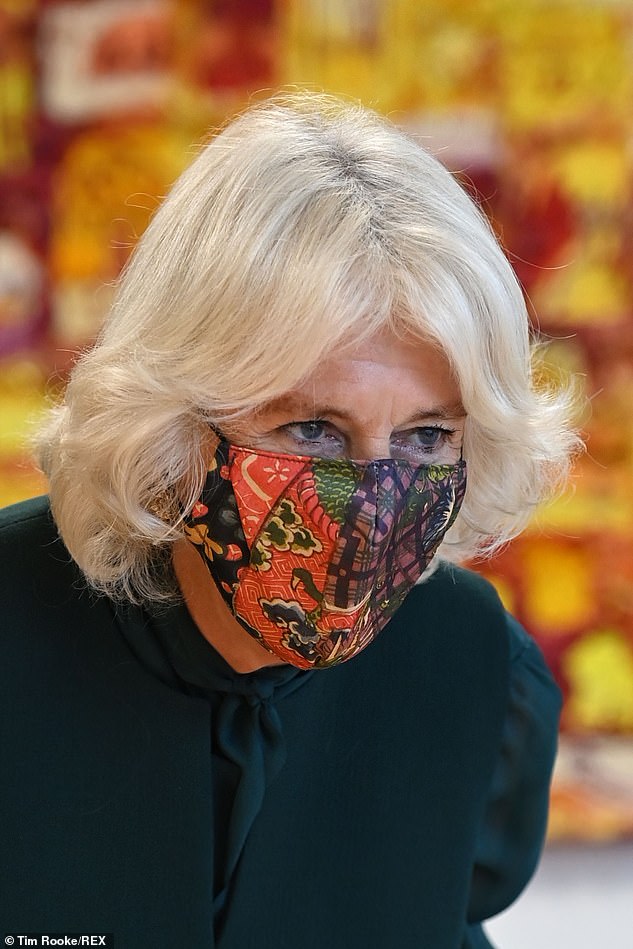 Once inside the centre, the royal opted for an elegant orange and purple patterned face mask (pictured) 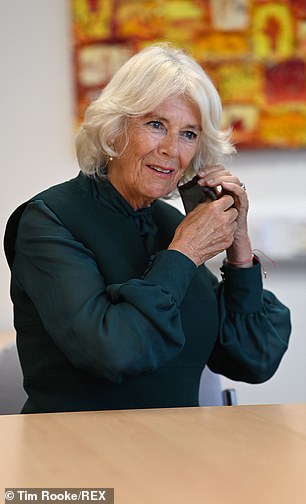 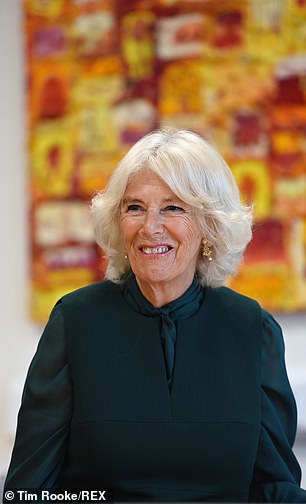 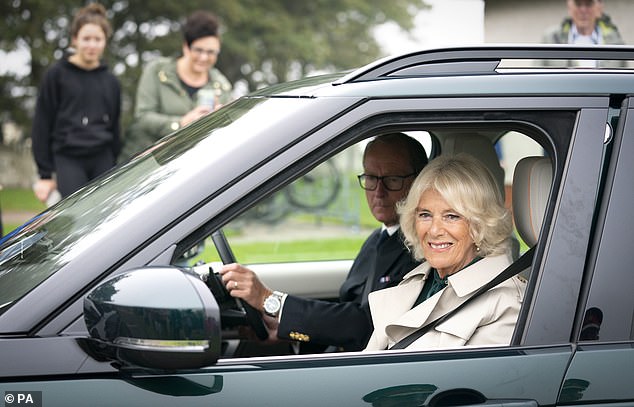 Camilla viewed one of the flats, which housed their first clients last month, and met with one woman, who cannot be named for her safety, with two young children who had fled appalling domestic abuse.

‘Thank you for talking to me,’ the duchess said. The young woman told her how much she appreciated the facilities.

‘How long can you stay here?’ Camilla asked. ‘A long as they can have me,’ she laughed.

‘They have eight flats here but there are probably a lot more need,’ Camilla replied. ‘I can understand the importance to you of having somewhere safe to go, but also somewhere that offers you privacy as well as support and advice.’