Two massive carpet pythons that fell off a cliff into the ocean stunned onlookers by fighting near a walking track at a popular surfing beach.

A fan of the page, Brett, stumbled across the extraordinary sight during a coastal walk among the high cliffs.

Snake catcher Stuart McKenzie told Daily Mail Australia it was actually a quite common sight in the Sunshine Coast area.

‘My wife and I walk the dogs there all the time, it’s not too uncommon for the area,’ he said.

Mr McKenzie, from Sunshine Coast Snake Catchers, said he gets calls to wrangle carpet pythons in nearly every suburb around the area.

‘It’s quite common to get calls for fighting snakes around this time, we’re right at the start of breeding season and lots of snakes are on the move,’ Mr McKenzie said.

Mr McKenzie said he wasn’t too sure who won the battle after he was told both snakes fell from the cliff and into surf below.

‘When they fall down like that they’ve gotta make the trip back up,’ he said. 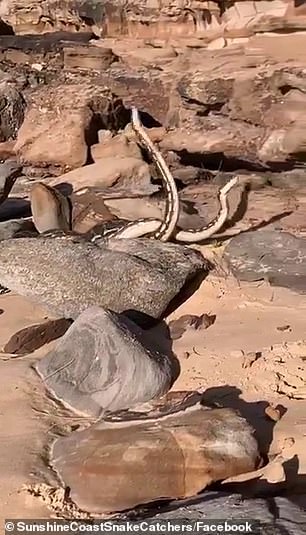 Mr McKenzie said he wasn’t too sure who won the battle after he was told both snakes fell from the cliff and into surf below.

Carpet Pythons can live for up to 20 years and are non-venomous but kill their prey by constricting it.

They are one of the most common snakes in Queensland and grow to a maximum 12 feet (3.5 metres).

They are particularly fond of eating rats and mice but their diets can include a wide range of animal and birds. 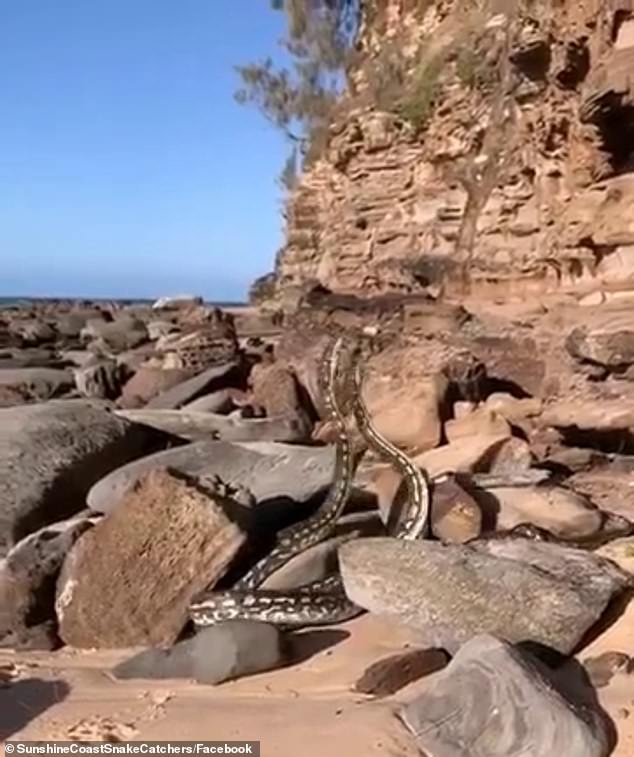 Excusssssssse me! The two adult pythons brawled it out in front of a stunned walker