Controversial MP Craig Kelly could be facing legal action over unsolicited text messages he sent to 14 million Australians encouraging them not to get a Covid vaccine.

The Therapeutic Goods Administration has sought legal advice over the messages Mr Kelly sent out, which appear to link to government information about problems experienced by people who have had a Covid vaccine.

If the recipients of the SMS messages clicked on the link provided, it took them to what looks like the official TGA Database of Adverse Event Notifications (DAEN), which has been reproduced without context or explanation.

‘Reporting of an adverse event on the DAEN does not mean that the vaccine caused the event,’ the TGA said in a statement provided to Daily Mail Australia.

‘Information on the DAEN cannot be used to evaluate whether a medicine or a vaccine is safe.’ 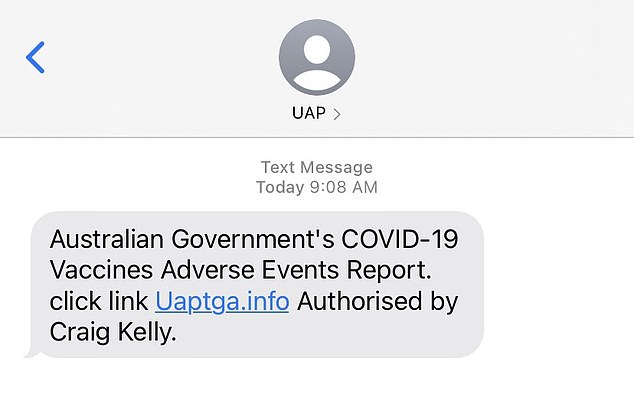 Mr Kelly, a former Liberal MP, quit the party in February this year and in August signed up to lead Clive Palmer’s United Australia Party into the upcoming Federal election.

The former Liberal MP-turned UAP member has publicly promoted the dangerous use of drugs such as ivermectin and the malaria drug hydroxychloroquine as treatments for Covid-19.

Mr Kelly previously claimed he resigned from the Liberal party because he wanted to speak freely about treatment drugs, which have not been proven as appropriate treatments for Covid in Australia.

He has also accused governments of taking an ‘authoritarian’ approach to preventing the virus from spreading.

The TGA confirmed legal advice had been sought.

‘The TGA is considering whether the use of the information, including the TGA logo, in this way potentially breaches both copyright legislation and the Criminal Code Act 1995 (Cth), in consultation with relevant Commonwealth agencies,’ a statement read.

It is understood the TGA is consulting other government agencies over the ‘ongoing issue’. 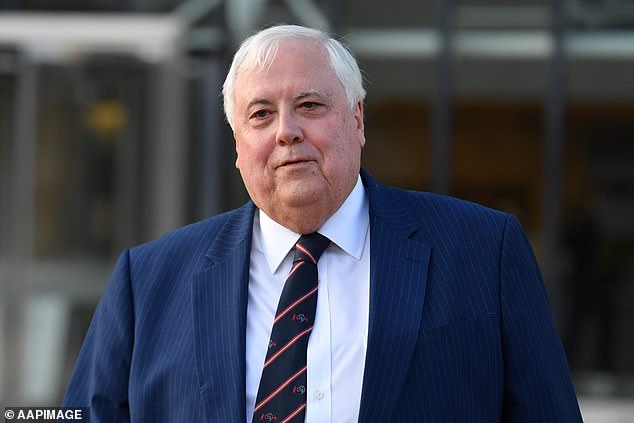 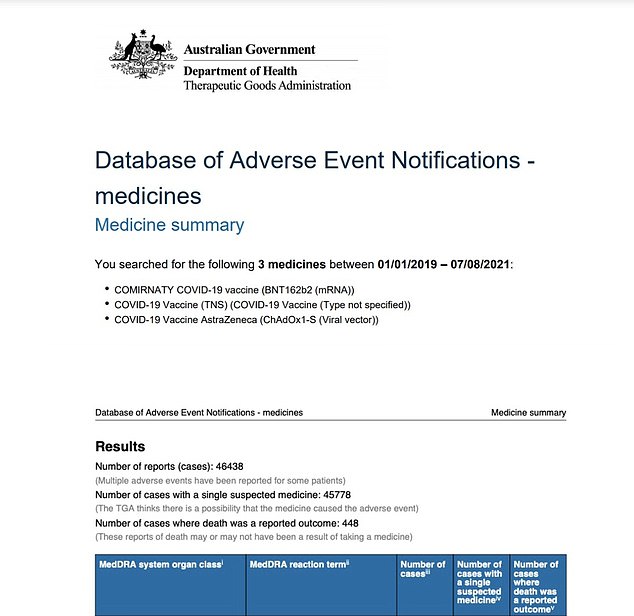 The agency also noted it ‘is aware that false claims are circulating based on misinterpretation of adverse event information’ in several countries.

‘The TGA is very concerned about any information which provides an incorrect picture of the safety of COVID-19 vaccines, particularly if that information is distributed widely to the public,’ it said.

‘We encourage people to rely on credible information sources when making decisions about vaccination.’

The spam message campaign is understood to have been funded by UAP founder and mining billionaire Clive Palmer.

Mr Kelly’s messages are being slammed for distributing ‘misleading’ information, with a Melbourne doctor taking to Twitter to criticise the MP.

‘So odious Craig Kelly is sending text messages to scare people off vaccination now. Note I had blocked their number after the last unsolicited text message,’ Dr Shaun wrote.

‘Driving vaccine hesitancy while people are on ventilators and dying from Covid in this city. They should be ashamed.’

The 57-year-old riled up Australians with his unwarranted text messages, after a previous SMS made the rounds earlier in the week.

‘You can never trust the Liberals or Labor, or Greens again. Authorised by Craig Kelly, United Australia Party. Click on this link,’ the first round of texts read. 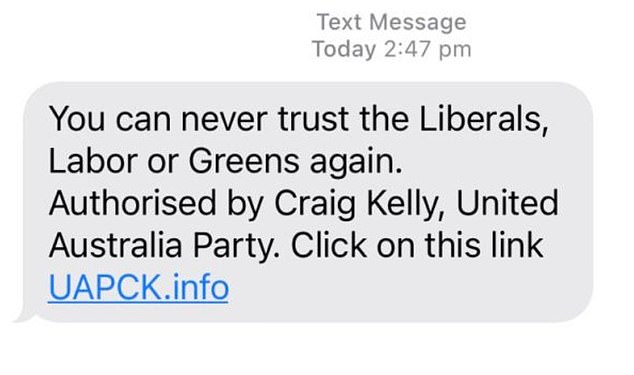 ‘Not sure if this is within your ambit but probably should be. Had an unsolicited text message from Craig Kelly UAP, How did he get my number? I regard this as impinging on my privacy & is intrusive spam,’ wrote one person on Twitter.

As of September 1 the Australian Communications Media Authority (ACMA) has received more than 4,036 complaints about the text messages.

Political parties are permitted to distribute calls, emails or texts without the recipient’s permission as long as it is not for commercial reasons according to the media regulator.

‘[Text messages that] don’t offer, advertise or promote goods or services—are not required to comply with the obligations under the Spam Act 2003,’ ACMA told Daily Mail Australia.

‘Communications about elections or political matters are usually not commercial and [the text messages] do not appear to include a commercial purpose.

‘There are, however, rules that apply to the disclosure of authorisation details for matters related to elections on non-broadcasting media platforms.’

Daily Mail Australia has reached out to Craig Kelly for comment.