He fell with six needed, but Nitish Rana saw them home with 10 balls left.

Delhi made 127-9 with captain Rishabh Pant and the returning Steve Smith both making 39.

Kolkata stay fourth in the eight-team table, but move to 10 points – clear of three teams on eight points. Delhi missed the chance to go top of the table, but remain well-placed to qualify in the top two. 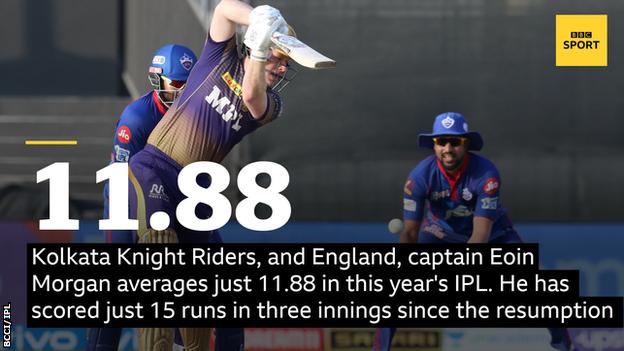 Eoin Morgan’s form has been a concern for much of 2021. He averages just 11.88 for Kolkata in this year’s IPL, and just five in three innings since the resumption two weekends ago.

During the summer, he averaged just 12.25 in four Twenty20 internationals for England, and 21.57 in The Hundred. With the men’s T20 World Cup starting in the United Arab Emirates straight after the IPL, Morgan needs to find some form.

His latest dismissal came via a thick edge, after he barely moved his feet looking to drive through the covers, off the off-spin of Ravichandran Ashwin. It was a soft dismissal, and one of a batter out of form.

Thankfully for Morgan, contributions from Narine, Shubman Gill (30 off 33) and Rana (36 not out off 27) were enough to guide his side to their third victory from four games since the resumption.

KKR were below par before the tournament was halted in May, and the resumption prompted them into making changes as they looked to earn a play-off place.

One was bringing in 26-year-old Venkatesh Iyer for his IPL debut.

He had so far impressed with the bat – scoring 112 runs in three innings, at a strike rate of 155.55 – but here he produced with the ball.

The former accounting student had only bowled one over in the tournament, but West Indies all-rounder Andre Russell’s hamstring injury meant Morgan had to find a solution in the field.

He threw the ball to Iyer and he dismissed Shimron Hetmyer, caught at long-off, and Axar Patel – caught at mid-wicket – in successive overs to leave Delhi reeling at 92-6.

Morgan entrusted him with the penultimate over too. It went for 10, but only because of a terrible misfield and an unnecessary overthrow.

Speaking after the game, Iyer said: “It felt very good – I always had confidence that I could deliver with the ball.

“I try to bowl accurately and to my field – I don’t mind boundaries here and there as long as my planning and execution is good.”