Hong Kong’s legislature has passed a privacy law tackling doxxing — the public release of information identifying an individual or organisation — that critics say could be used to protect those in power and target civil society.

Supporters say the legislation was long overdue to counter a problem festering since the city’s 2019 mass pro-democracy protests.

Some officers’ home addresses and children’s schools were exposed by anti-government protesters, leading to threats.

But some technology companies are concerned the legislation is so broad and vague that it could hamper operations in Hong Kong.

Human rights and pro-democracy groups fear it could be used to crack down on dissent.

“This is to fight doxxing behaviour that divides society, as early as possible,” Constitutional and Mainland Affairs Secretary Erick Tsang, said in the Legislative Council, which has no opposition party.

The law empowers The Office of the Privacy Commissioner for Personal Data to investigate and prosecute doxxing.

Violators include anyone who discloses an individual’s personal data without consent “with an intent to cause specified harm or being reckless” about the harm caused.

One Country, Two Systems, and the countdown to 2047 Hong Kong was handed back to China with no post-2047 framework, leaving the city to carve an identity out of two ideologically opposed empires.

The commissioner can apply for a warrant to enter and search premises and seize materials for investigation, and can access electronic devices without a warrant.

Asia Internet Coalition, an advocacy group that includes Google, Facebook and Twitter, said in a June 25 letter to the commissioner that tech companies could stop offering their services in Hong Kong if authorities went ahead with the changes.

The coalition said the measures were “not aligned with global norms and trends,” and that any legislation that could curb freedom of speech “must be built upon principles of necessity and proportionality”.

The legislation passed on the same day that staff of Hong Kong’s embattled public broadcaster were ordered to support the national security and interests of the Chinese and Hong Kong governments.

The only independent, publicly funded media outlet on Chinese soil, Radio Television Hong Kong (RTHK) has been broadcasting since 1928 and is sometimes compared to the British Broadcasting Corporation (BBC).

Its charter guarantees it editorial independence.

The broadcaster angered the Hong Kong government, police and many across the city’s pro-Beijing establishment with its coverage of the anti-government protests that rocked the city for much of 2019.

RTHK said a detailed document was issued to staff setting out its editorial responsibilities, policies and procedures, following a critical government review in February.

The broadcaster reported the document, issued by management, stressed that RTHK programmes must not provoke or deepen hatred, discrimination or hostility towards the Beijing or Hong Kong governments. 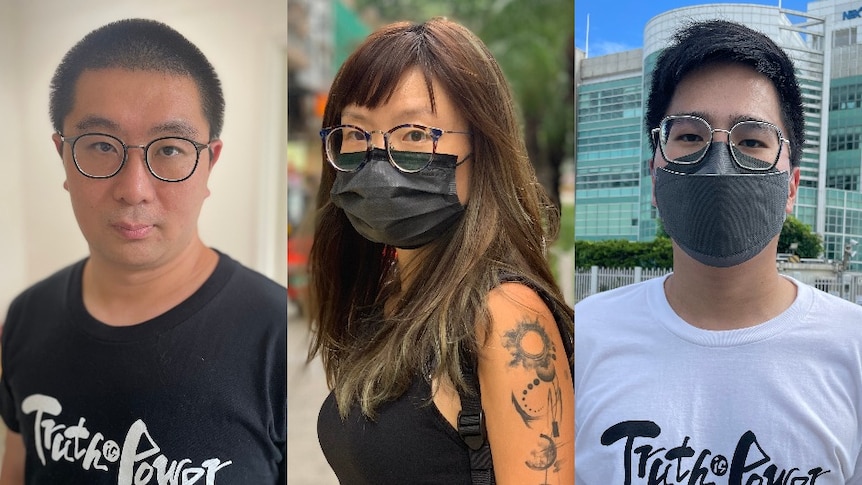 Three former Apple Daily reporters are taking the risk of speaking out to 7.30, saying they fear more media outlets could be targeted next.

It states that “under no circumstances should our programmes provide a platform to encourage, incite, promote, glorify, endorse or sympathise with any act or activity endangering national security or otherwise contain any contents which are contrary to the interests of national security.

China imposed a sweeping national security law on Hong Kong last year that critics say has been used to crush dissent in the city, an accusation authorities in Beijing and Hong Kong reject.

Hong Kong returned to Chinese rule in 1997 under a “one country, two systems” agreement that promised it wide-ranging freedoms unavailable on the Communist Party-ruled mainland.

Protests that rocked the city in 2019 were fuelled by perceptions that Beijing was tightening its grip on those freedoms, which authorities have denied.

RTHK’s role has come under increased scrutiny as the government implements its national security law.

The document “would enable RTHK to better fulfil its public purposes and mission as a public service broadcaster, and its responsibilities as a government department”, a press release on RTHK’s website said.

“RTHK is editorially independent under the Charter. This point is reaffirmed in the document. However, editorial autonomy also involves responsibility,” the press release said.

RTHK quoted Kitty Choi, an adviser to the director of broadcasting, saying that staff could continue to interview people who were critical of the government.

A man faces a maximum penalty of life imprisonment under Hong Kong’s national security law, which is also seeing the death of pro-democracy newspaper Apple Daily.

The document also reminds staff to avoid contacts with foreign governments or political organisations to prevent conflict with their official duties.

They must also be cautious in their use of social media.

Some staff expressed confusion and concern to Reuters. “I’m not sure that I will be able to produce any more programmes that aren’t directly in line with the government’s stance,” one staff member said.

The memo follows several recent moves by the government to overhaul the broadcaster, with a review in February finding deficiencies in its editorial management and a lack of transparency in handling complaints.