Karl Stefanovic has unleashed a serve on tennis world number one Novak Djokovic after the defending Australian Open champion revealed he would rather miss the grand slam than prove his vaccination status.

Unvaccinated stars will likely be banned from competing at the Melbourne tournament in January as Victoria recovers from a third wave of coronavirus.

Premier Daniel Andrews has introduced a vaccine mandate for professional athletes competing in domestic sports leagues and has hinted tennis stars who haven’t been jabbed may not be granted a visa to come Down Under.

Immigration Minister Alex Hawke confirmed on Wednesday that Novak Djokovic would not be allowed into Australia unless he was double-vaccinated.

Stefanovic fired up about Djokovic’s refusal to confirm his vaccination status after an interview with Victoria AMA President Dr Roderick McRae on the Today show.

Stefanovic supported Victoria’s strict stance on vaccinations which will likely not allow Djokovic compete for a 10th crown at the Melbourne grand slam.

‘You’re going to have people going to the Australian Open tennis tournament, which is going to be incredible,’ he said.

‘A shame not to have him there. You’ll have double vaccinated people in the crowd, you can’t let him in.’

‘He is not our favourite anyway.’

Co-host Allison Langdon quipped: ‘He is not well liked, is he?

The immigration minister can confirmed Djokovic will not be allowed into Australia if he is not double vaccinated.

‘Our health advice is that when we open the borders everyone that comes to Australia will have to be double vaccinated,’ Mr Hawke told RN Breakfast. 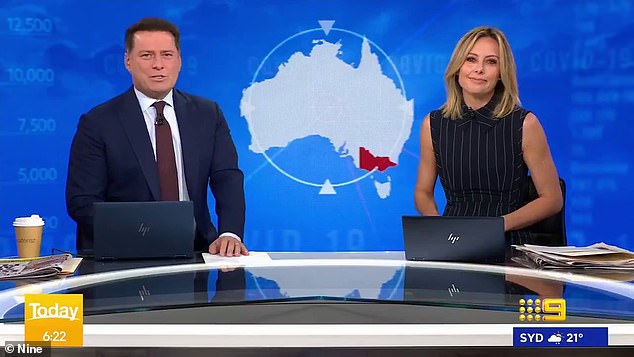 ‘I think there is an element of standards. It’s important our leaders make these decisions in our interests and it demonstrates to the community just how important we take this.’

The Premier has warned unvaccinated Victorians will have to wait until 2022 to enjoy more freedoms.

‘I don’t think an unvaccinated tennis player is going to get a visa to come into this country,’ Mr Andrews told reporters on Tuesday.

‘If they did get a visa, they’d probably have to quarantine for a couple of weeks when no other players will have to.

‘Professional sport is part of that authorised worker list and they have to be double-dose vaccinated.’

‘AFL players have to be vaccinated, but they’re Aussies, they’re not coming from other countries.

‘I don’t think any other tennis player, or golfer, or Formula One driver, will even get a visa to get here. 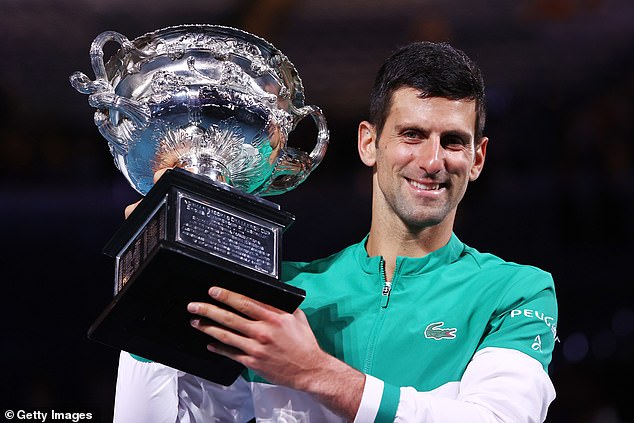 Unvaccinated stars could be banned from competing at the Australian Open, including defending champion Noval Djokovic (pictured)

Djokovic has implied he is not willing to open up on whether he has rolled up his sleeves and would give up his title defence and quest of a record 21st grand slam than reveal his vaccination status.

‘Things beings as they are, I still don’t know if I will go to Melbourne,’ he told the online edition of Serbian daily Blic.

‘I will not reveal my status whether I have been vaccinated or not, it is a private matter and an inappropriate inquiry.

‘People go too far these days in taking the liberty to ask questions and judge a person.

‘Whatever you say ‘yes, no, maybe, I am thinking about it’, they will take advantage.’ 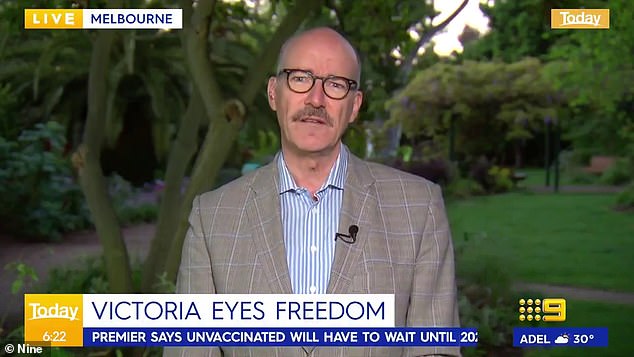 Djokovic remains hopeful of coming to Australia to win his 10th title on Rod Laver Arena.

‘Of course I want to go, Australia is my most successful grand slam tournament,’ he said

‘I want to compete, I love this sport and I am still motivated.

‘I am following the situation regarding the Australian Open and I understand the final decision (on COVID-19 related restrictions) will be made in two weeks.

‘My manager, who is in contact with the Australian tennis federation, tells me they are trying to improve the conditions for everyone, both for those who have been vaccinated and those who have not.’