Liverpool and Atletico Madrid played out an enthralling Champions League clash at the Wanda Metropolitano on Tuesday evening.

Liverpool headed into the tie looking to make it three wins from three in the competition this year.

And Jurgen Klopp’s side were eventually able to do exactly that in the Spanish capital.

Liverpool took the lead after just eight minutes via Mohamed Salah, before Naby Keita then scored a rocket to double Liverpool’s lead after less than 15 minutes:

Naby Keita with a rocket of a volley! 🚀

Liverpool are dominating early on against Atletico as they take a two-goal lead inside the first 15 minutes! pic.twitter.com/Nwi8xtDycz

The Reds blew their lead pretty quickly, however, with Antoine Griezmann scoring a first-half brace to make it 2-2 at the break.

But Griezmann would then get sent off shortly in the second half for a high foot:

After getting Atletico back into the game, Antoine Griezmann is given a straight red for a high foot on Bobby Firmino 😳

Liverpool were then awarded a penalty late in the game, which Mo Salah stepped up to convert, handing Liverpool a 3-2 win.

Following the tie, Diego Simeone would run down the tunnel straight after the full-time whilst, ignoring Jurgen Klopp’s attempt for a handshake.

No handshake between Simeone and Klopp as the Reds edge Atletico in a five-goal thriller! 😮‍💨

Liverpool fans have since taken to Twitter to let their feelings on the Argentine be known, with just some of the tweets showcased below:

Couldn’t stand before and hate him even more now.

Simeone needs to grow up

Pathetic. Just like his playing style. If they’re not diving they’re fouling

What a win for Liverpool! And shame on you Simeone for running off without a hand shake. That’s the sort of game that we used to lose… not anymore! YNWA

Really poor from Simeone. I would have hoped for better.

Disrespectful. He screamed like a lost-mind man when it was at level, runs off when at defeat. Poor Simeone! 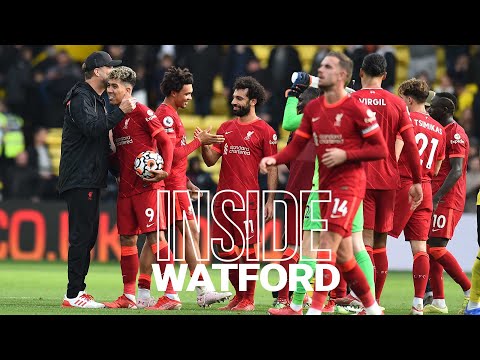 Get the best view of Liverpool’s Premier League victory at Vicarage Road, as Mane,…