A man has created an incredibly detailed Lord of the Rings-style map of Oxfordshire, showcasing the county where author J.R.R. Tolkien wrote the fantasy novels in a new light.

The Middle-earth inspired map was created by artist Chris Birse, after an estimate 70 hours of dedicated work.

Mr Birse has recently quit his job as a manager at Aldi to pursue his passion for map making full-time, calling himself a ‘fantasy cartographer’.

The 34-year-old, who is from Darlington, told the Oxford Mail the project actually started when he was writing his own fantasy novel and needed a map to illustrate the story’s location and geography.

Chris Birse working on one of his fantasy maps. Picture: Chris Birse

He said: “I thought, rather than get someone to do it for me I will have a go myself.

“I did one for my home region of Teesside and I got a lot of really great feedback from it, so I thought this is something which is pretty cool and people really seemed to like it.

“I am going on a journey around the country now doing all the various counties. I would like to eventually put them into a big fantasy atlas of the UK.”

With Oxfordshire being the latest edition to the collection, Mr Birse has already created fantasy maps for a variety of counties across the UK including County Durham, Hampshire and Kent, as well as countrywide maps for Wales, Scotland and Ireland.

He plans to embark on neighbouring Berkshire next.

During the map’s creation Mr Birse reached out to Oxfordshire locals on social media by positing on community groups and threads. He hoped to get their input on local landmarks to include which may not be easily found to an outsider, such as stone circles, battlefields and standing stones.

After ‘a lot of positive feedback’ from Oxonians, Mr Birse added a number of locations famously related to Tolkien including the Eagle and Child pub, Tolkien’s bench and Wolvercote Cemetery

Mr Birse said he does not normally include pubs on his maps but he ‘pretty much had to’ include the Eagle and Child because of its strong connection with the author. 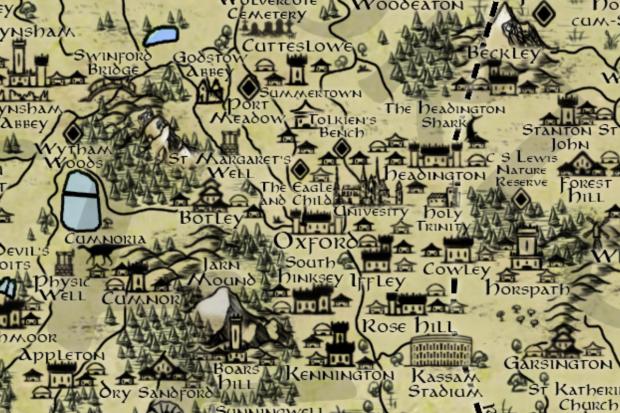 Mr Birse has given his switch to being full-time fantasy cartographer an initial six months to see if it will work, with hopes the Christmas period will bring in a lot of interest in his maps.

The Oxfordshire Lord of the Rings fantasy map is available on Mr Birse’s Etsy account, FantasyWorldMaps, from £16.99.

LIVE UPDATES: Reports of collision on the A34