A train has flipped on its side after colliding with an abandoned car deliberately left on the tracks south of Sydney.

Ten passengers were evacuated from the four-car train at the West Dapto Rd intersection in Kembla Range, Wollongong, early on Wednesday morning.

Four people – including the driver who was trapped inside the front carriage until emergency services arrived – were taken to hospital for treatment.

Fire and Rescue Superintendent Adam Dubrey told 2GB there were reports a car had deliberately been left on the tracks.

‘A crime scene has been established,’ he said. 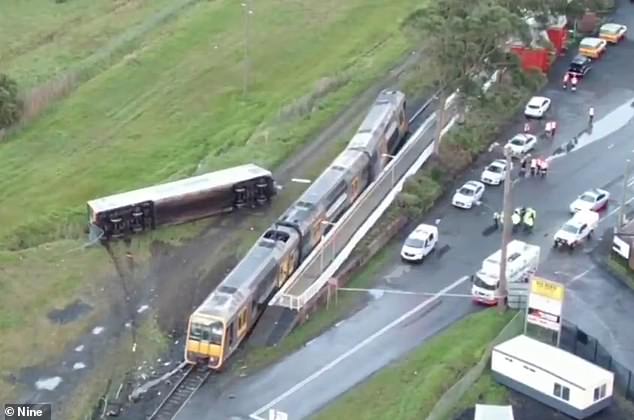 Commuters have been told to brace for serious delays

‘The power has been shut off for the safety of the passengers and the rescuers… with the train blocking that line there’ll be some significant impacts on the rail network.’

Commuters have already been warned to expect huge delays on NSW trains as rail workers strike over the lack of progress on a new enterprise bargaining agreement.

Commuters on Sydney Trains and the NSW TrainLink Intercity network will have fewer services on Wednesday, with some running to a reduced timetable and others replaced with buses. 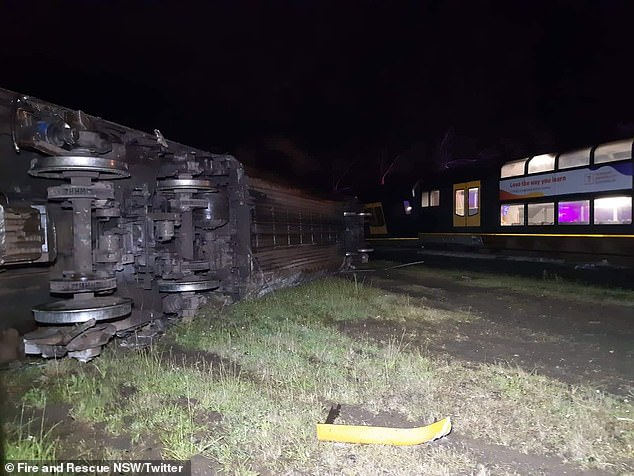 The train driver, who was trapped in the front carriage for some time, was also taken to hospital after being rescued

Transport for NSW chief operating officer Howard Collins said travellers should “expect your trip to be impacted and longer than usual”, with disruption all day and only about 30 per cent of services running.

People should use trip planning apps and the Transport for NSW website to find the latest information and alternative travel options.

Crews are refusing to drive privately built trains, which include Waratah and Millennium trains.

The Rail Tram and Bus Union says it was forced to take industrial action after a continued refusal to meet with workers to negotiate fair wages and conditions.

RTBU state secretary Alex Claassens told AAP the union hoped a four-hour stop work action last month would have been sufficient to bring senior management to the table to negotiate a new enterprise bargaining agreement, but that hadn’t happened.

He said the union hoped for “serious movement” in the negotiations after a meeting scheduled for 10am on Wednesday, which he hoped Mr Longland would attend, unlike previous negotiations with junior managers “quoting out of the script”.

Negotiations have been stalled for months amid union concerns about the further privatisation of services and jobs, as well as the cleanliness of trains.