Alex ‘Chumpy’ Pullin’s widow Ellidy has revealed the name of their daughter who was conceived via IVF after the Olympian’s death.

The little girl has been named Minnie Alex, in homage to her late father, with Ellidy announcing the exciting news on Instagram on Thursday afternoon.

‘Our girl, born on October 25, 2021’ Ellidy wrote, sharing a photo of her lovingly gazing at the sleeping newborn when the pair were in hospital earlier this week.

Relatives and friends flocked to the couple’s Gold Coast home on Thursday with gifts for the new mother who faces the difficult task of raising their little girl alone after Chumpy, 32, tragically drowned while spearfishing in July last year.

Among the visitors was Seven News reporter Denham Hitchcock whose exclusive documentary about Ellidy’s journey of losing Chumpy to having their baby is set to air on Sunday night.

The investigative journalist was seen carrying a bouquet of flowers as his camera crews followed him inside for an exclusive interview with the first-time mum.

It was one of the first time Mr Hitchcock has been spotted by photographers in public since he was rushed to hospital in August with heart condition – pericarditis – after getting the Pfizer jab.

He looked very fit after his health scare with the extremely rare side effect, which causes inflammation around the heart in one in around 74,000 people after receiving the vaccine.

The house guests arrived just hours after Ellidy announced she had given birth on her Instagram account on Thursday, posting a video of her sleeping newborn.

‘I had a baby!’ she says excitedly, before the clip showed the bub wrapped up in a blue blanket on a table beside her.

‘And we have been a lil busy and tired,’ super imposed text read, as she panned the camera to her weary eyes and took a bite of a sandwich.

Another video posted to her page shows the Pullins’ dog Rummi excitedly running around the house after the baby was brought home, alongside the caption: ‘Big sister’.

Loved ones and the couple’s celebrity friends offered their congratulations including Neighbours star Matty Wilson and professional surfer Felicity Palmateer. 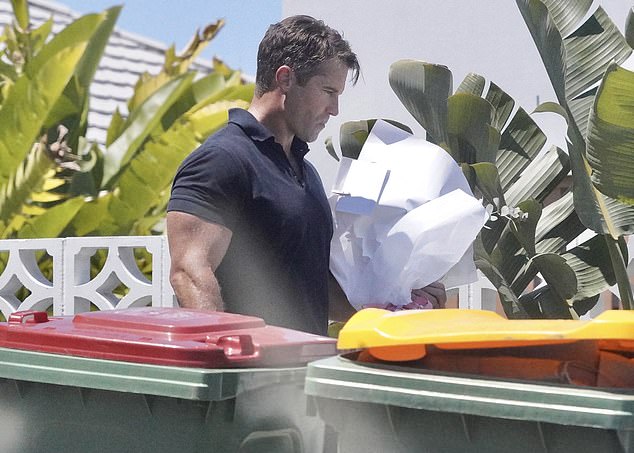 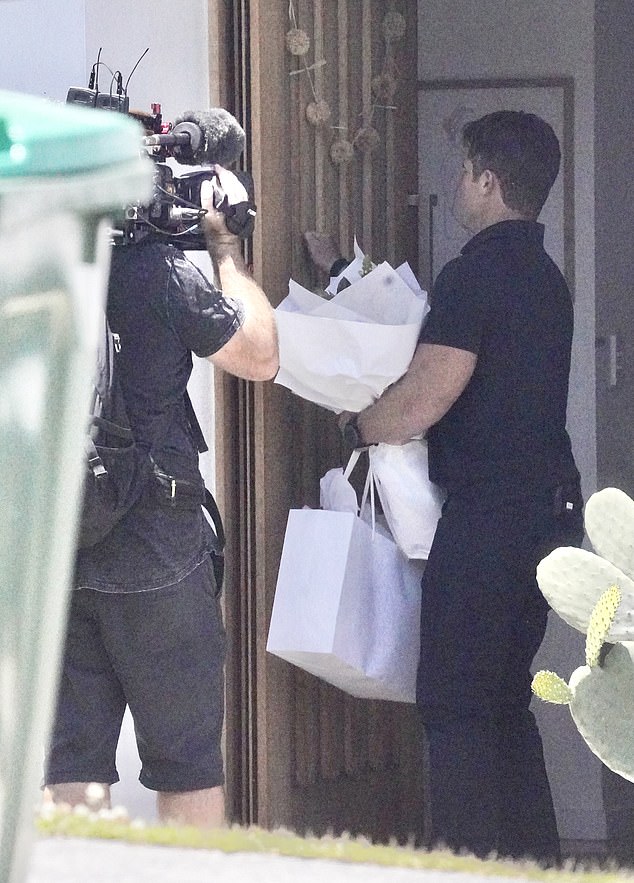 ‘Best big sister. A part of daddy back earthside and Rummi knows it. I love you all soooooooo much!!!’ surfer Laura Enever wrote.

‘Congratulations! The best news,’ Palmateer said, while television presenter Liz Cantor commented: ‘Congrats beautiful my heart is exploding for you.’

‘Rumi is going to be the best little side kick for bubba Chump!’ Relph wrote.

‘Can’t wait to watch them grow together. Proud of you mumma, you did sooo goooods!! 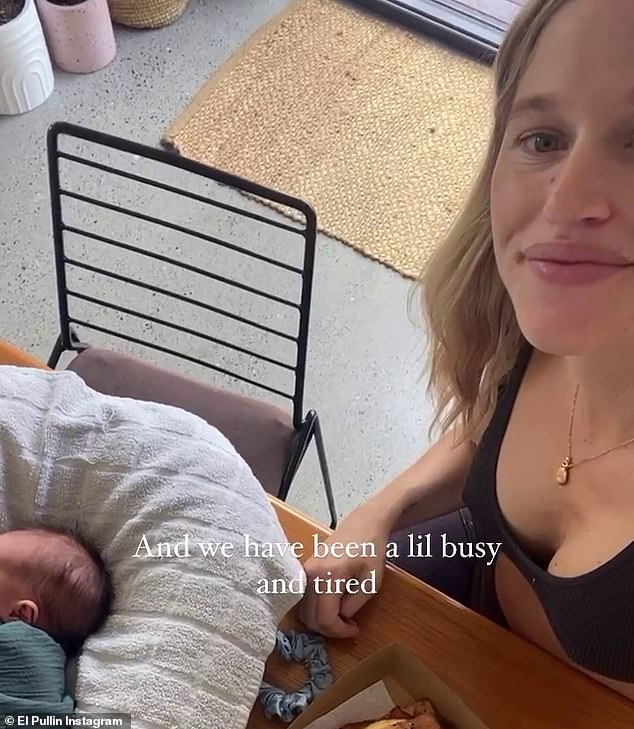 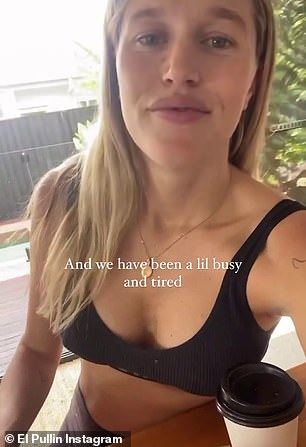 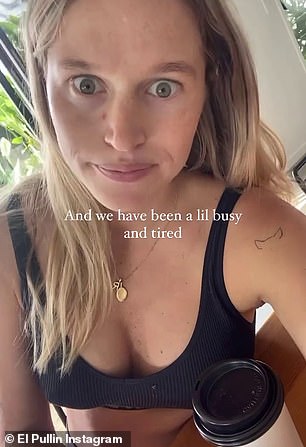 The new-mum revealed the exciting news on Instagram, sharing a photo of her newborn sleeping on the table while she had a coffee and some food 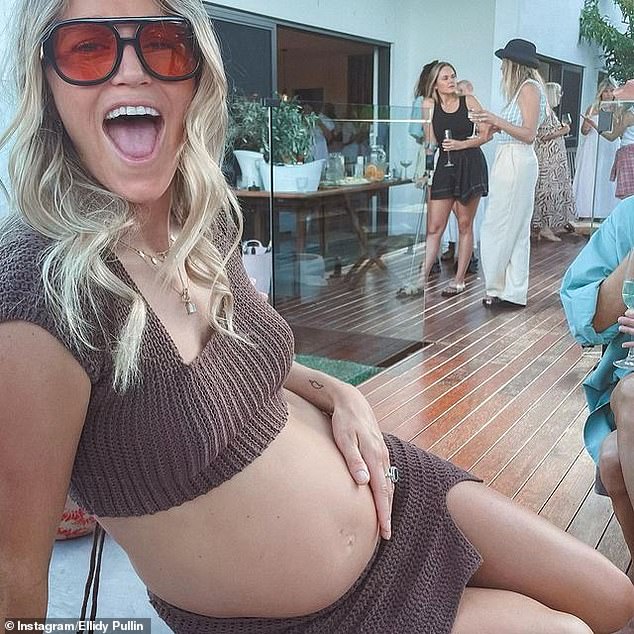 Chumpy Pullin’s widow previously opened up about the pain it causes her seeing other fathers carrying their children, saying her late husband is ‘missing out on being a dad’

She said she had to complete counselling session before undergoing IVF to ‘tick a bunch of boxes’, which dredged up painful emotions.

‘It was such a triggering process’.

Ellidy said she had undergo two embryo implants, but the first was unsuccessful and she lost the pregnancy in January.

‘I’m so grateful – it’s almost unheard of it for it to work on the second round [of IVF], I’m so lucky,’ she said.

She said there is one more fertilised egg from the same batch she can use later on if she wants to have a second baby, or there is the option of making another collection with new eggs and Chumpy’s stored sperm.

In an earlier podcast, she said it was unfair her late husband would miss out on making memories with their child.

‘My grief is for Chump, he’s missing out on being a dad, I see dads with their babies knowing how good he would have been,’ Ellidy said last week.

Chumpy, 32, is believed to have died from a shallow water drowning, which occurs when someone hyperventilates and expels large amounts of CO2 before a breath-hold dive.

It’s believed Chumpy incorrectly performed the dive, leading to the beloved husband and snowboarder to black out and drown. 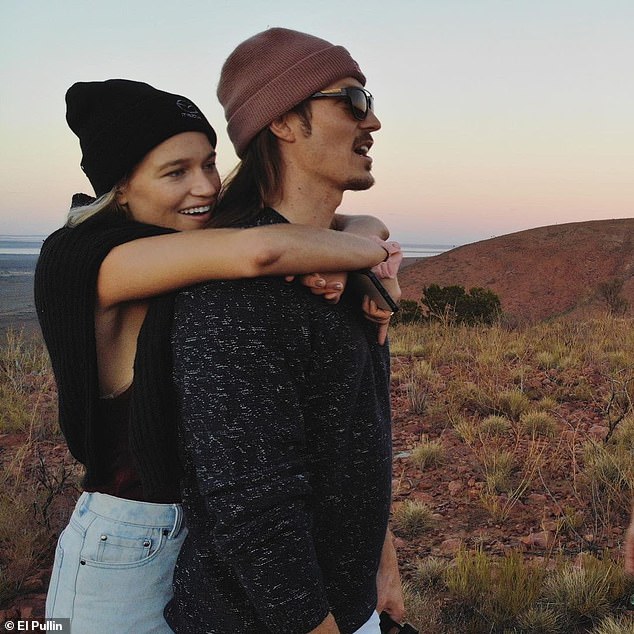 Ellidy, 29, decided to use his sperm for IVF treatment to ensure her husband would be a father and could continue his legacy. 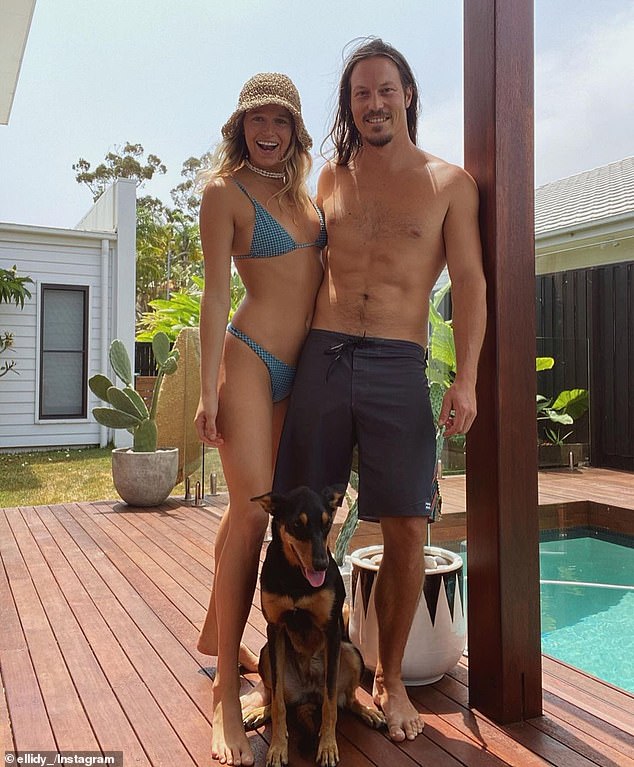 Chumpy, 32, drowned while spearfishing off the Gold Coast in July last year

His death in July 2020 shocked the community given the experience of the former Olympian and extreme sports expert.

He left behind Ellidy, 29, who decided to use his sperm for IVF treatment to ensure her husband would be a father and could continue his legacy.

She revealed to Ms Fisher that seeing other young fathers was a constant reminder of what Chumpy was missing out on.

‘Every day I go to the beach and I see guys walking along the beach with their chicks and the guy is carrying the baby in the carrier on his chest and the girl’s got the dog,’ she told the podcast.

‘When I see a dad with a baby it f***ing kills me, and I am so happy for that person, it’s not a pity party here.’

She said the fact she was able to have a child with her late husband is ‘the most beautiful thing ever’ but admitted it was a bittersweet moment.

‘I’m having a baby which is going to be the most beautiful thing ever and bittersweet in that it’s almost going to create more trauma here and there,’ Ellidy said.

‘It’s really hard to swallow the fact that he’s missing this, he deserves this time, he wanted this, he would have been the best dad.’

Earlier this month the Ellidy said her friends had provided her with ‘unwavering support and love’ in the year after his death.

‘My friends literally deserve a medal for the way they have shown up for me the past year,’ she began, sharing a series of photos from what appeared to have been her recent baby shower. 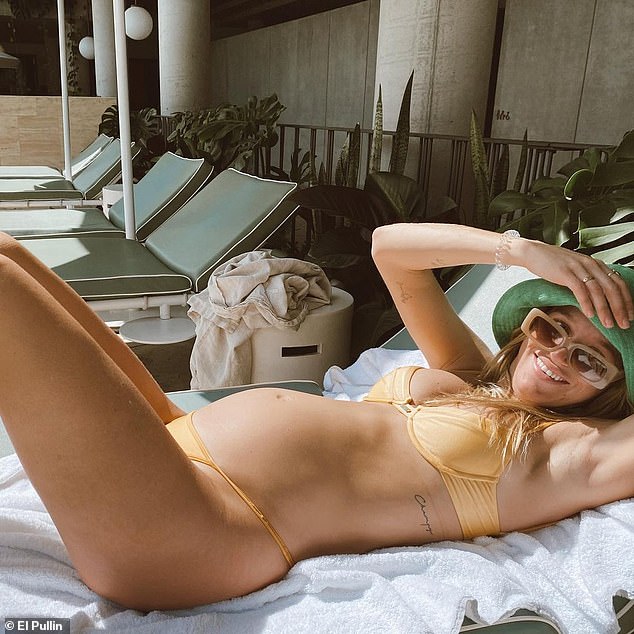 ‘I’m having a baby which is going to be the most beautiful thing ever and bittersweet in that it’s almost going to create more trauma here and there,’ Ellidy said

‘Instead of feeling awkward and withdrawing in unfathomable circumstances, they stepped the f**k up in this wild year of ‘firsts’ without my Chumpy, and that cannot be easy!

‘Taking this s**t on head first with me, running towards the pain and suffering, using it as fuel to cherish and look after each other, appreciate every moment, live and be kind.’

She added: ‘My crew near and far continually injecting me with energy and grit to keep putting one foot in front of the other.

‘I feel so grateful and lucky to be bringing Chumpy’s daughter or son into this love bubble.’

Ellidy announced she was pregnant with Chumpy’s baby on Instagram in June, almost a year after he drowned while spearfishing at a reef off Queensland’s Palm Beach.

Speaking on her podcast back in June, Ellidy spoke about her desperate rush to collect his sperm after his tragic death.

Ellidy revealed they had to ‘hustle’ to retrieve Chumpy’s sperm in the days after his death on July 8 last year.

Under Queensland legislation, sperm can be removed posthumously when a designated officer declares their belief that the deceased wouldn’t object. 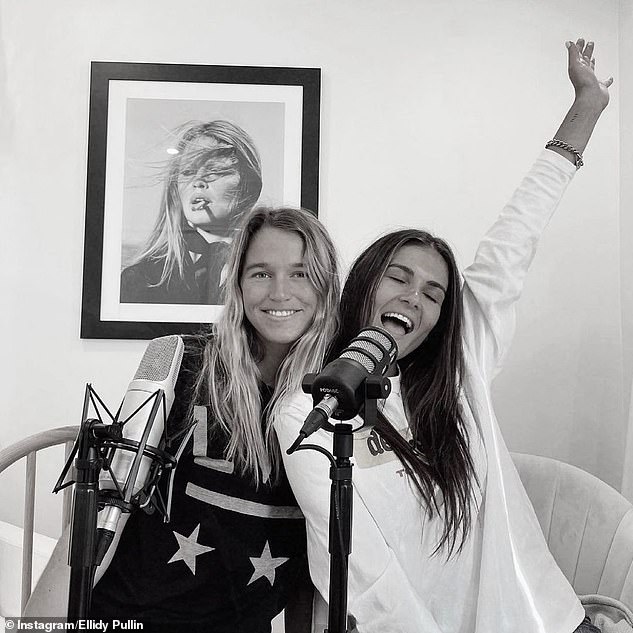 Ellidy revealed to Chloe Fisher, who is married to DJ Paul Fisher and grew up with Ellidy in Narrabeen on Sydney’s Northern Beaches, that seeing other young fathers was a constant reminder of what Chumpy was missing out on

The consent of the immediate family – including Chumpy’s parents – is also required before any sperm can be retrieved.

An IVF specialist assists with the retrieval, with a recommended removal timeframe of between 24 and 36 hours after death.

Ellidy admitted it was quite an undertaking, with everyone having to sign off on legal documents, while also dealing with coroners, lawyers and doctors.

She said her pregnancy is ‘the most bittersweet thing in the world’, but added that she was determined to parent a child with Chumpy.

‘I’m not saying it’s going to be easy or a walk in the park. I have a lot ahead of me, I’ve got big shoes to fill,’ she continued.

She added: ‘I go through a lot every day and I will forever grieve, that never leaves you, but I was always so sure of one thing – that I was always going to have this bub.’