Gladys Berejiklian: ‘I’ll throw money at Wagga, don’t you worry about that’


Gladys Berejiklian told her then lover Daryl Maguire that ‘I’ll throw money at Wagga, don’t you worry about that’, a tapped phone call played as evidence at a corruption inquiry has revealed.

The Independent Commission Against Corruption is, in part, investigating if Ms Berejiklian engaged in conduct ‘liable to allow or encourage the occurrence of corrupt conduct’ by Mr Maguire.

Earlier, the ICAC heard evidence that Mr Maguire and Ms Berejiklian talked about having a baby together, had secret holidays and he had a key to her house, a corruption inquiry has been told in explosive evidence.

Mr Maguire agreed with ICAC counsel Scott Robertson that he and the former NSW premier had ‘a close emotional attachment’, that he loved her, that ‘as far as you could tell, she loved you’, ‘you contemplated marriage to her’ and they had ‘a level of physical intimacy’.

‘There was a discussion about potentially having a child?’ Mr Robertson asked. Mr Maguire agreed with this.

Mr Maguire told the Independent Commission Against Corruption that Ms Berejiklian did not ask for the key to her door back after their relationship ended.

Mr Robertson put it to Mr Maguire that ‘At least so far as you’re concerned, you remained in a close personal relationship until briefly before the last public inquiry last year?’

Ms Berejiklian had asked Mr Maguire to resign as an MP in July 2018 after his evidence at a previous ICAC inquiry.

She has already told the ICAC that she was still in contact with Mr Maguire until September last year.

‘You loved her?’ Mr Robertson asked.

‘And so far as you can ascertain, she loved you as well?‘

‘There was a discussion about potentially having a child?’ Mr Robertson asked.

Mr Maguire confirmed he ‘encouraged’ Ms Berejiklian ‘to take a close interest’ in the two multi-million dollar grants which are at the centre of the corruption investigation, and that ‘from time to time’ she informed him about what she knew about these applications.

He later said ‘I lobbied everybody’ about projects of interest to him.

Mr Maguire agreed he lobbied Ms Berejiklian about multi-millions of dollars in funding for two organisations in his electorate, including a proposed $5.5 million upgrade at the Australian Clay Target Association (ACTA).

He said this was not unusual but agreed he had more access to Ms Berejiklian because they were in a relationship at the time.

Mr Maguire was sked if he was involved in getting ACTA’s funding proposal onto the agenda of the NSW government’s expenditure review committee (ERC) meeting in December 2016.

‘I don’t know. I don’t run the ERC. I don’t recall. I would have thought the minister would have put it forward or someone from the premier’s office,’ he said. 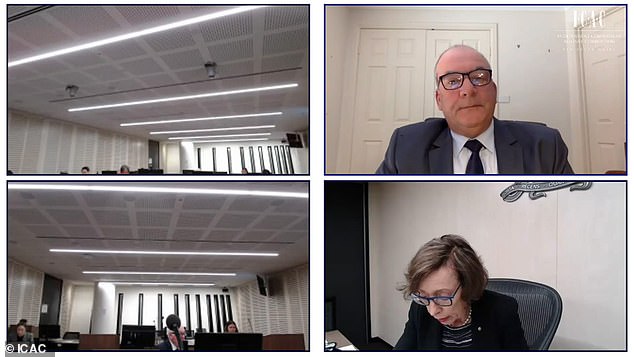 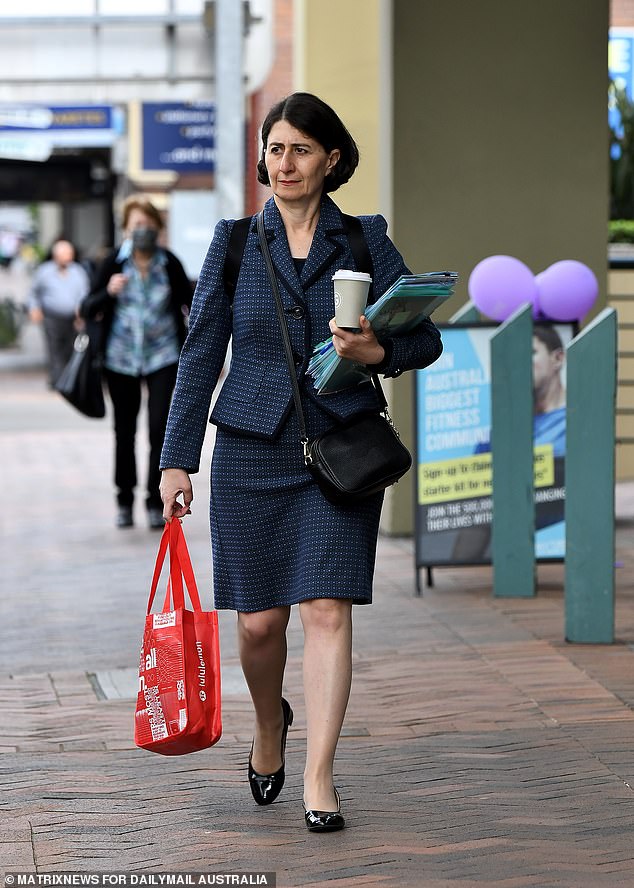 Former NSW premier Gladys Berejiklian’s legal team made a last ditch bid to keep her former lover’s evidence to ICAC heard in private, but the application was refused

Ms Berejiklian’s legal team earlier failed in a last ditch application to have evidence from her secret boyfriend, Mr Maguire, kept private at the corruption inquiry into the former premier.

In calling for a private session, barrister Sophie Callan said she had ‘personal privacy concerns of the highest order’ for Ms Berejiklian.

She said no public service would be served by ‘plumbing the depths’ and wanted to prevent any ‘humiliation and harm’ to her client.

Ms Callan told ICAC Assistant Commissioner Ruth McColl, SC, who is presiding over the inquiry, that she has a discretion to hold part of the hearing in private.

Ms McColl asked Ms Callan her what private details she was referring to.

‘Hallmarks or indications at the level of commitment’ in that relationship, replied Ms Callan.

She also called for the non-publication of any evidence held in such a private session.

Jim Harrowell, a member of Mr Maguire’s legal team, said he supports the application. ‘A private hearing is more appropriate,’ he said.

Mr Robertson called for the application to be refused. ‘A public inquiry is to be held in public,’ he said.

He added that having a private session would risk it ‘becoming a public inquiry in name only’.

Mr Robertson argued that the hearing should be able to publicly delve into the nature of the relationship between Ms Berejiklian and Mr Maguire because the former premier openly gave interviews to the press after a previous ICAC hearing a year ago about how she planned to marry him.

Responding, Ms Callan said ‘Mr Robertson has not advance advanced any cogent or persuasive reasons’ not to hold the session in private.

Ms McColl adjourned the hearing to consider her position. When she returned she announced that she had rejected the application for a private hearing.

‘And so far as you can ascertain, she loved you as well?’ Mr Robertson asked.

‘There was a discussion about potentially having a child?’ Mr Robertson asked.

3. Exercised any of her official functions partially in connection with two multimillion-dollar grants in Mr Maguire’s electorate, to the Australian Clay Target Association Inc and the Riverina Conservatorium of Music

Mr Maguire was asked about a press release he put out in January 2017 about $5.5 million in state government funding for ACTA.

The ICAC previously heard evidence that NSW bureaucrats thought the release was premature as the funding was still contingent on a satisfactory business case being made.

Mr Maguire said his impression was ‘the money would flow with some paperwork’ and ‘I can’t recall there ever being strings attached to it’.

He was shown an email he sent Ms Berejiklian on March 6, 2017, saying: ‘Typical of our bulls**t government.’

At that time, the government was working with outside consultants to prepare a revised business case examining the benefit to cost ratio of the project.

He said the upgrade of the ACTA gun club was urgent and he was ‘venting my frustration at the bureaucracy and the way the government tied itself in knots’.

He added that Ms Berejiklian ‘needed to know the rubbish that was going on’.

Asked if he was inviting her to intervene, Mr Maguire said: ‘You could read that as an invitation. You could interpret it as that.’

Mr Robertson later asked Mr Maguire about a phone call he made while he was an MP which was recorded by ICAC investigators.

Mr Maguire admitted that he attempted to get confidential information from other MPs about land in Cawdor in the Wollondilly Shire to assist his property developer friend William Leong.

‘I asked their view on what they thought would happen,’ Mr Maguire said.

He agreed with Mr Robertson that he had misused his position as a member of parliament. 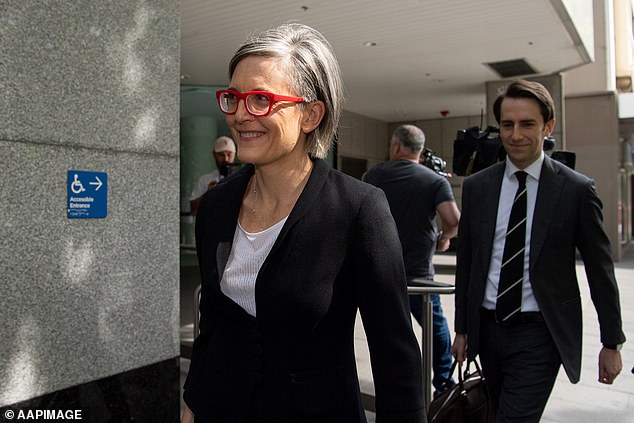 Sophie Callan (pictured), who is representing Gladys Berejiklian, arrives at the ICAC hearing in Sydney on Thursday

On Monday, former deputy NSW premier John Barilaro told the ICAC that Ms Berejiklian should have disclosed her secret relationship with Mr Maguire, who at the time was the Liberal MP for Wagga Wagga.

Ms Callan sought to turn the tables on Mr Barilaro, asking if he had disclosed relationships of his own.

Mr Barilaro said he ‘would have’ disclosed any relationships, including family links.

‘What about any other intimate personal relationships?’ Ms Callan asked.

‘That’s a hard question because my relationships are with my family,’ Mr Barilaro said.

Daily Mail Australia is not suggesting Mr Barilaro has done anything improper in his personal or professional lives.

Ms Callan was one of 26 NSW barristers to be appointed senior counsel last year. She is best known known for prosecuting former Labor ministers Eddie Obeid and Ian Macdonald over matters arising from ICAC inquiries.