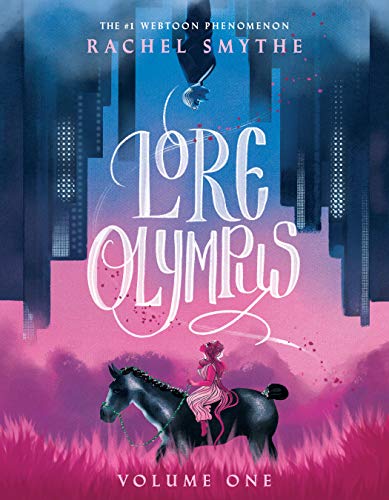 Lore Olympus is a graphic novel that loosely follows the myth of Persephone’s abduction by the god of the underworld, Hades. The graphic novel combines ancient Greek mythology and ancient customs with a contemporary setting to create something brand new. The unique artistic style and the compelling story make it impossible to put down. It is an easy read but full of mythological characters and storylines and is a great read for all greek myth lovers!

Lore Olympus is a graphic novel that was initially published on Webtoon and is now being published in physical format. Volume One only includes episodes 1-25 but Rachel is continuously uploading new episodes online. Lore Olympus is a contemporary retelling of the myth of Hades and Persephone from Greek mythology, in a stunning and unique graphic novel format. Let me tell you, it is absolutely wonderful.

Okay, let’s start with a recap on the myth of Persephone and Hades (remember, there are a bunch of different sources all with contradictory information, this is just a quick rundown of the general myth). Persephone (initially known as Kore) is the daughter of the Olympian goddess of Agriculture, Demeter. Persephone is the goddess of spring, but one day she is abducted by Hades (the god of the underworld) who has fallen in love with her when he saw her picking flowers in a meadow, and eventually becomes the queen of the underworld and wife of Hades. In some versions, Zeus gives permission for the abduction… During her abduction, Demeter is going crazy looking for her, and enlists the help of a number of gods (including Helios, sometimes Hermes, and Hecate who gives her torches to help find Persephone). Demeter finds her daughter, but Persephone has eaten a pomegranate seed from the underworld and the rule is once you eat something from the realm of the underworld, you can’t leave. So, Hades and Demeter strike up a deal that Persephone will spend either a half or a third of the year (depending on your source material) in the underworld, and the other portion in the upper world. It is widely accepted that this myth was the explanation of the changing of the seasons – with the time Persephone as in the underworld as the time of Autumn and Winter when the crops die.

Back to Lore Olympus. Rachel Smythe has put the ancient Greek gods into a semi-contemporary world, with Olympus being very modern, and the mortal realm (Earth) being very Ancient-Greek-esque in style. This first volume follows Persephone and Hades’ meeting for the first time and introduces many central events, relationships, and characters like Minthe, Demeter, Hecate, Hermes, Artemis, Apollo, Zeus, and Hera. The art style is absolutely breathtaking, each god/goddess has its own colour, with Persephone being pink, Hades as blue, and Artemis (and her twin brother Apollo) as purple, etc. It is a really distinctive style, and is a really unique way to differentiate characters (and I can only assume would make it easier for readers who aren’t familiar with Greek mythology to keep the characters straight). The story is a wonderful combination of the ancient Greek myth in a modern setting which includes scandal, gossip, and wild parties but also facets of Greek myth and culture. There is some potentially triggering content in this first volume which continues through the Webtoon, Smythe has added a content warning to the beginning of the book and adds content warnings prior to potentially triggering episodes online which is really great to see.

This review was originally posted on Kell-Read.