From fashion back to farm: Trial spreads unwanted cotton clothing back on paddocks


What if unwanted cotton clothing could be returned to cotton farms instead of clogging up landfill in Australia and overseas, where it is an environmental catastrophe?

A trial earlier this year tried to find out if old cotton textiles could improve the soils of the very farms that grew the crop in the first place.

As part of the trial, farmer Sam Coulton and his grandson Harry spread two tonnes of shredded cotton on a paddock on their farm at Goondiwindi, in southern Queensland.

“We put it in a fertiliser spreader and then just spread it back on the land and it goes back into the soil,” he said.

Inspiration from those living in waste

It was a trip to Asia that inspired Mr Coulton to seek a solution to the problem of textile waste.

“I drove to the slums and the waste areas. In major places like that I saw in the 90s, I saw fabric waste. Five stories high. It was just enormous piles of waste and I saw people living in that waste.”

“Coming from a background of farming, you use everything or reuse everything. It’s always been against my grain to just throw something in the rubbish bin,” he said. 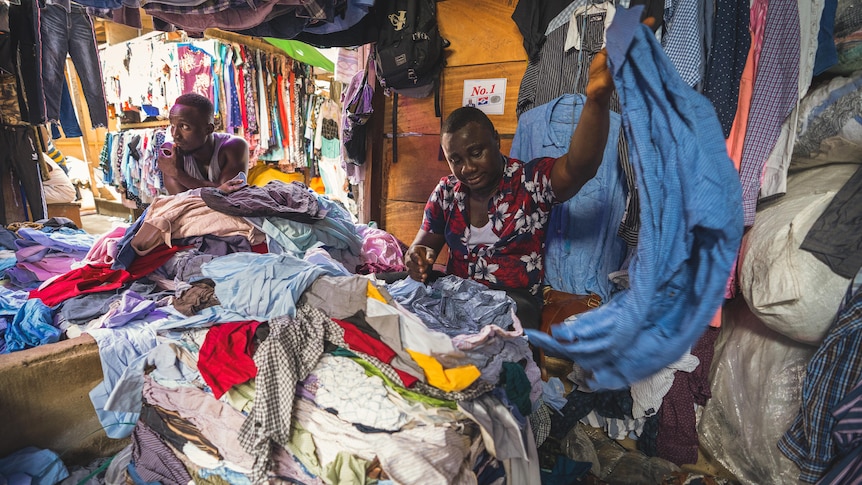 For decades, the West’s unwanted fashion has made its way to used-clothing markets in Africa. Now it’s fuelling an environmental catastrophe.

Australians part of the problem

Textile waste is a challenge for both developing and developed countries and Oliver Knox, a Senior Lecturer of Cotton at the University of New England, said Australians were a massive part of the problem.

“We as a nation are throwing out 23 kilograms of textile waste per person,” Dr Knox said.

Dr Knox said discarded clothing was as much of a problem for agriculture as climate change.

Bigger than just some soil samples

To track the change in the paddock from the trial, soil samples were sent to labs at the University of New England and Dr Knox said the results were unsurprising.

But the absence of dramatic change was encouraging, he said.

“For me it’s about doing no harm, we’re not doing anything bad by doing this.

“We’re hopefully just diverting a waste stream and trying to capitalise on it.

“If this program was to continue long term, we could start to see benefits in the future,” Dr Knox said.

A brighter future for the cotton industry

Meantime, farmer Sam Coulton was not surprised at all by the results of the trial.

“When you pick cotton, you can’t get it all off the bush,” Mr Coulton said.

“A little bit of it has been going back into the soil for years and that has been building the soil structure.

“The microbes and water holding capacity have increased and the tilled soil is absolutely magnificent,” Mr Coulton said.

But Mr Coulton said he understood cotton’s “circular economy” would only be successful if it was economically viable, and that government funding would need to play a role.

Burying undies in the name of science Dirty, degraded tighty-whities has never been a sign things are going well — until now, thanks to a backyard science experiment that has Australian farmers “over the moon”.

In the meantime, he hoped to encourage others in the cotton industry to implement a circular economy system on their own farms.

“We also feel responsible as a manufacturer that we’ve got to do something with the end product.

“It has to happen and this is the way we can do it,” he said.

Could this booming south-west suburb be one of Brisbane’s most neglected?