For a little more than an hour on Friday, President Biden was plain Joe again, walking the streets of Nantucket to slip into the shops, talk with locals and watch the town Christmas Tree lighting ceremony.

Except he was surrounded by Secret Service, White House staff, and members of the press. Agents cleared the sidewalks before him and The Beast rolled down the street next to him as he walked.

He was impossible to miss – a moving mass of people and vehicles surrounding him as he walked.  It was uncontrolled chaos as Biden chose his path and everyone raced to catch up as locals gathered en mass to see what was going on. There was pushing, there was shoving yet there was also holiday cheer.

Despite the pandemonium, the townspeople seemed thrilled to catch a glimpse of the president.

And Biden looked just as happy to be out, stopping to talk to people even as a yellow police line and a row a Secret Service agents seperated him from the crowd.

‘You look younger in real life,’ a man said to him.

One little girl in a pink coat, sitting on an adult’s shoulders, was so excited she waved her stuffed toy dog and barked at the president.

Others cried out: ‘We love you Joe,’ ‘Hey, Mr. President,’ and, of course, ‘Happy Thanksgiving.’  Nearly everyone had a phone out, taking photos and video of the moment for posterity.

President Joe Biden, with two of his grandchildren, walked the streets of Nantucket on Friday to do some shopping 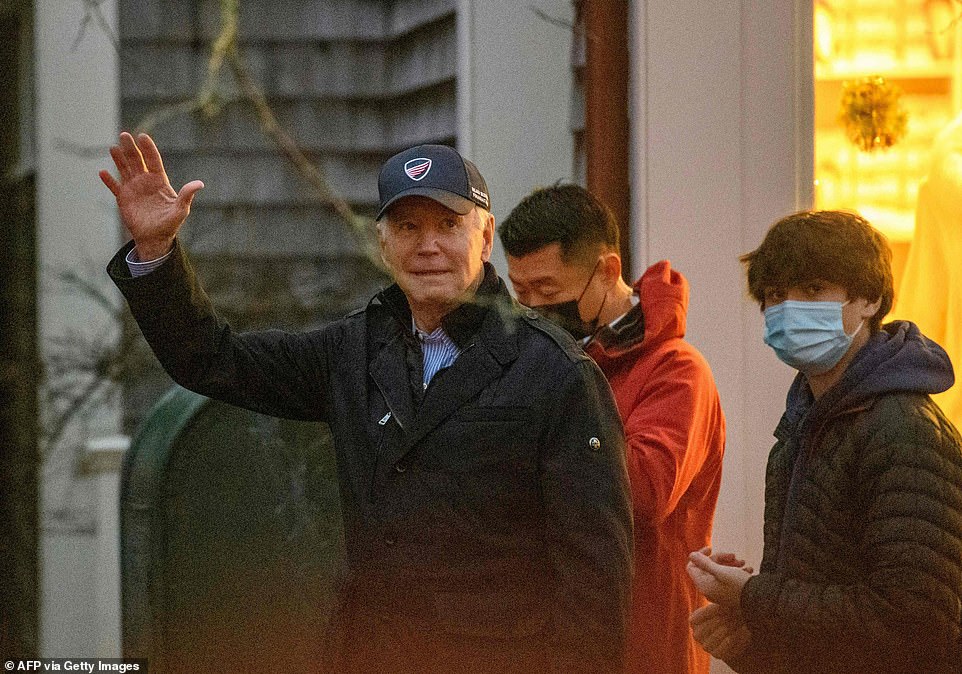 Biden waves to the crowds during his jaunt around Nantucket 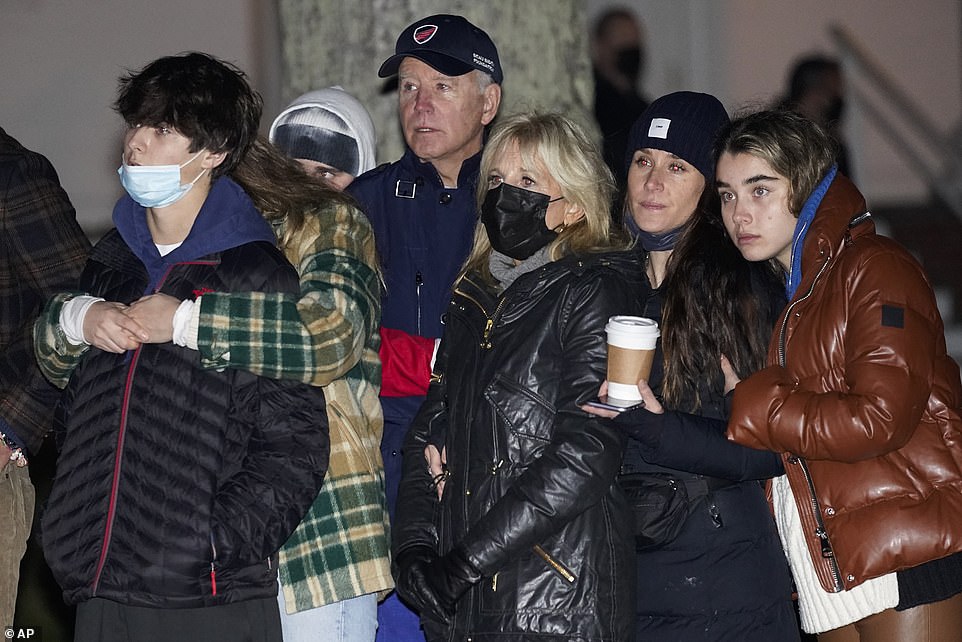 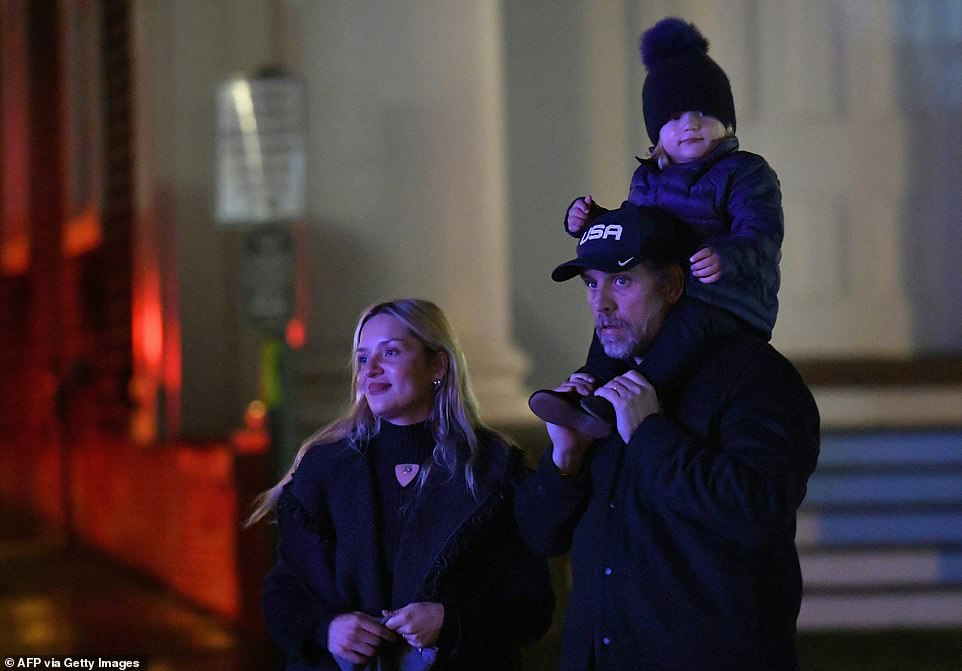 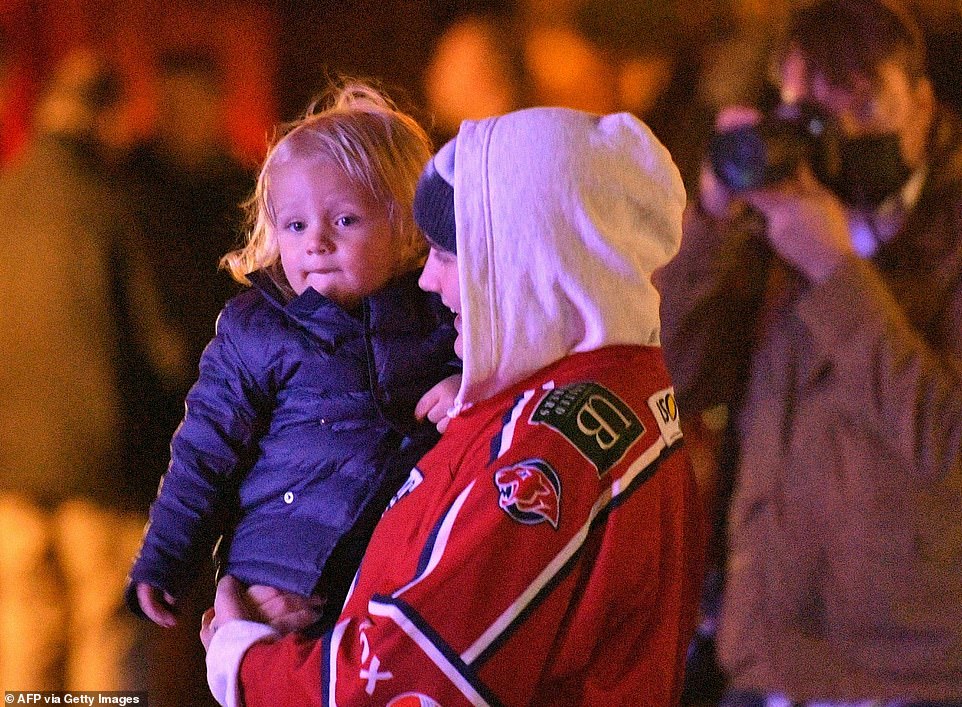 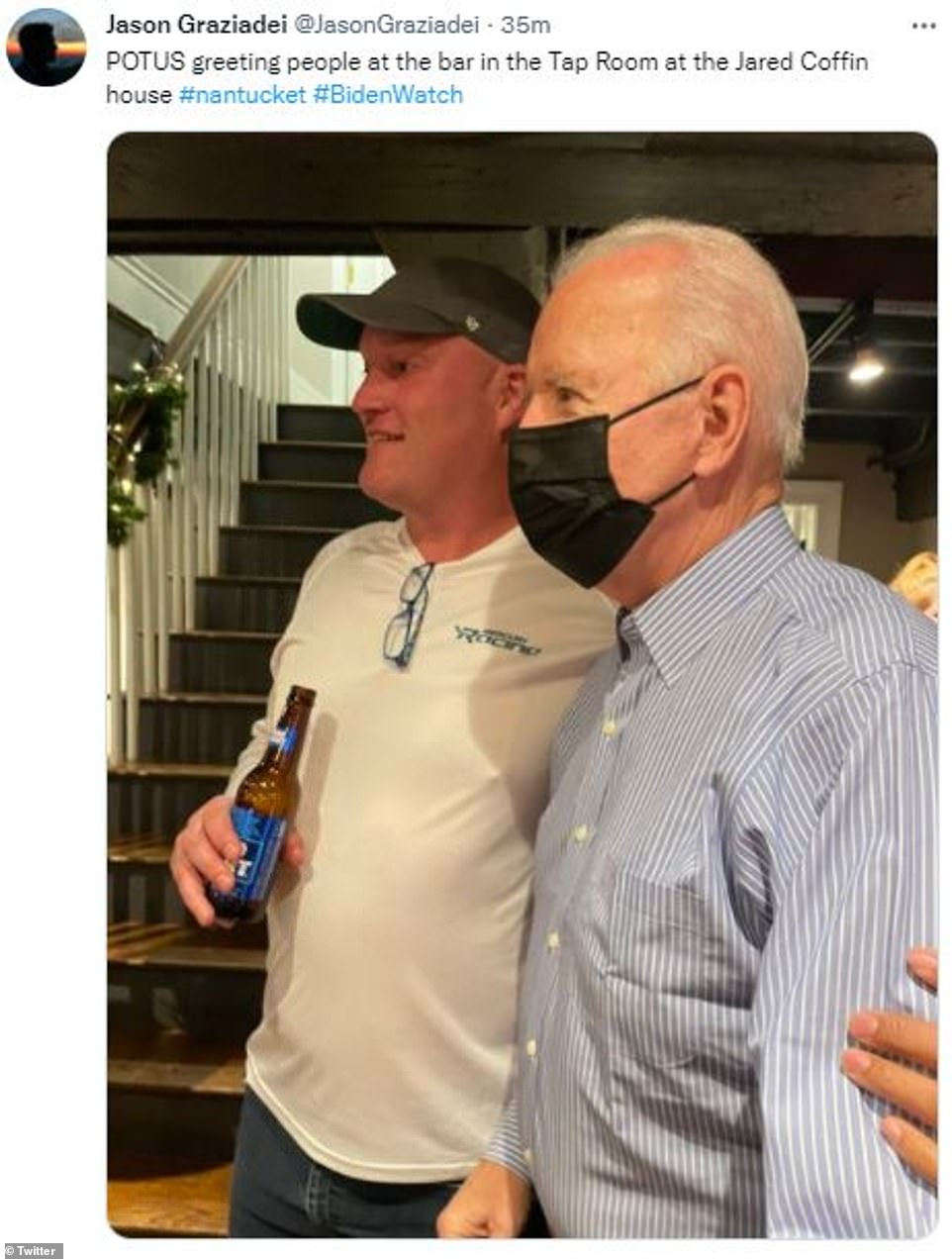 The president broke free from the bubble of the presidential motorcade after a post-Thanksgiving lunch with his family.

As agents led him toward the presidential limo known as the Beast, Biden ducked to the side and up the street, walking toward some of the shops. The Biden clan has been coming to Nantucket most years since the mid-70s – including when he was vice president – so Biden knows the area well.

The agents moved quickly to clear the mass of locals who gathered to see the motorcade leave as staff and media raced to catch up.

The on-and-off again rain showers didn’t deter the president – umbrella in hand, some Biden grandchildren at his side, the president walked the cobblestone sidewalks, baseball cap on head, face mask in place. At times Maisy Biden held onto his arm as they walked.

He stepped into Craftmasters of Nanucket, where he appeared to make a purchase,  and then stepped out, moved to his left and down the block, pausing to stop for a selfie with a local who asked.

He waved to shopkeepers who came to their doors, cell phones in hand, to see what the fuss was about. He visited an array of shops – Gypsy, Sunken Ship, Island Cashmere, Centre Point and Freedman’s of Nantucket.

He made a circular route around the downtown shopping area, ending his loop where the town Christmas Tree stood dark, waiting to be lit.

The Biden clan gathered in mass for the tree lighting: baby Beau was passed around from family member to family member: Maisy brought him closer to see the tree after it was lit, dad Hunter held him on his shoulders and mom Melissa held him for photos.

Biden didn’t light the tree but stood to the side next to wife Jill and the rest of his family, watching the ceremony take place.

The Biden grandkids took selfies, and danced and sang to the Christmas carols, sung by local high school students. 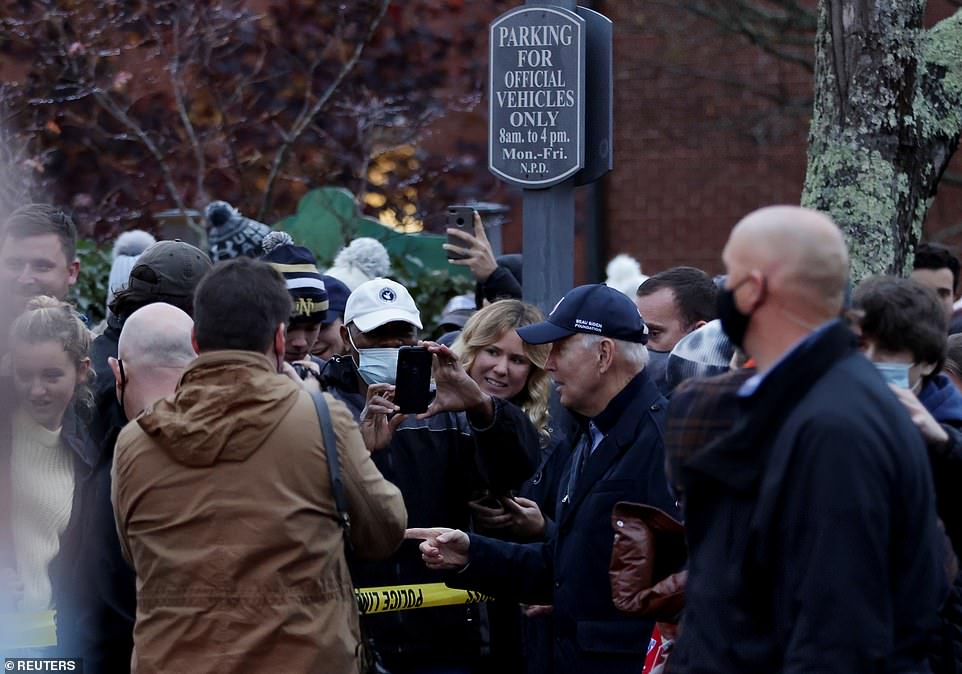 President Biden talks to the crowd gathered to see him 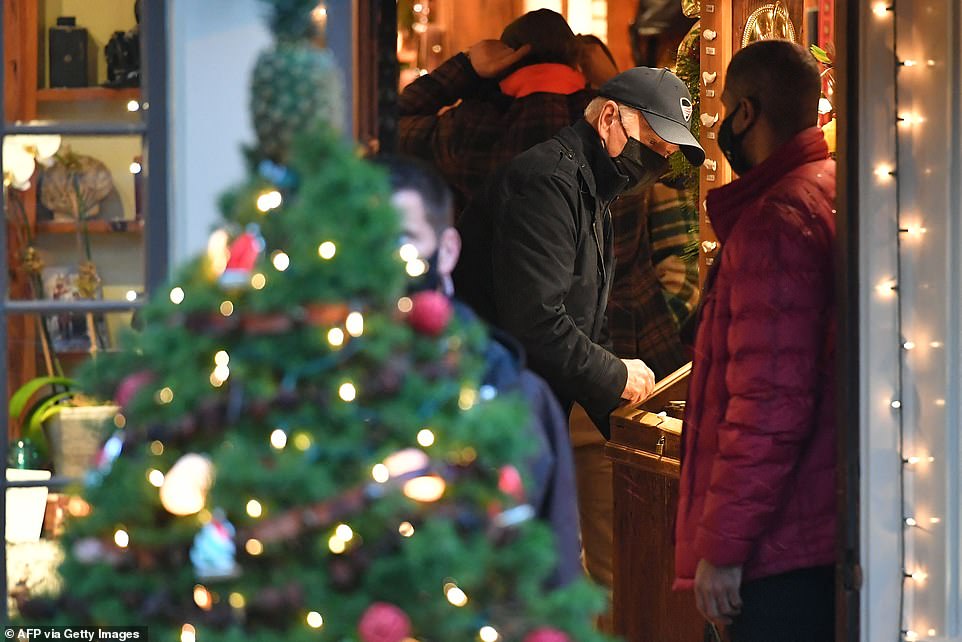 Biden appeared to make some purchases in some of the shops 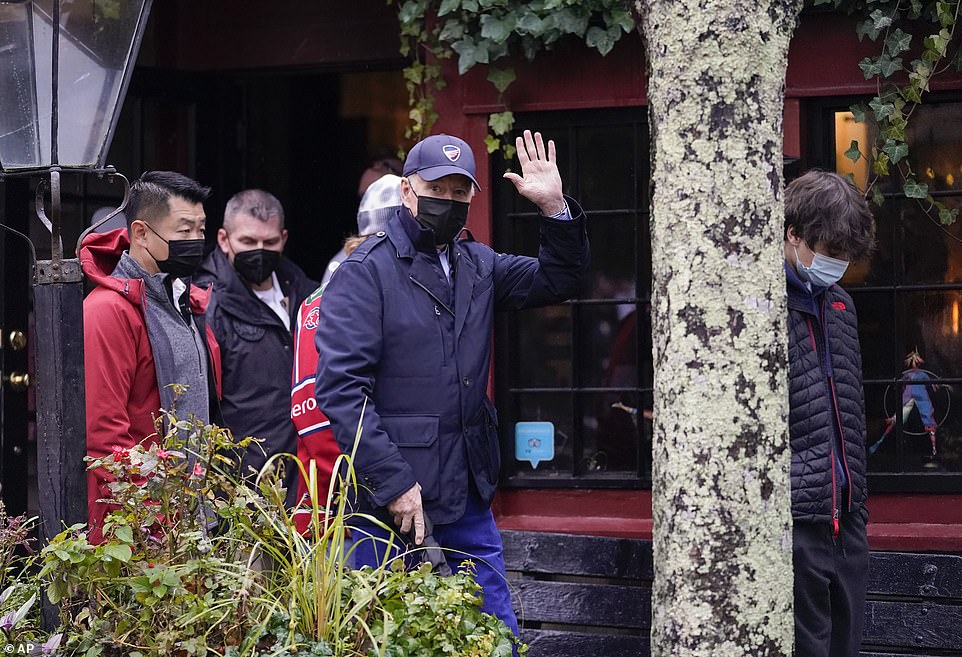 Crowds of people gathered to catch a glimpse of the president 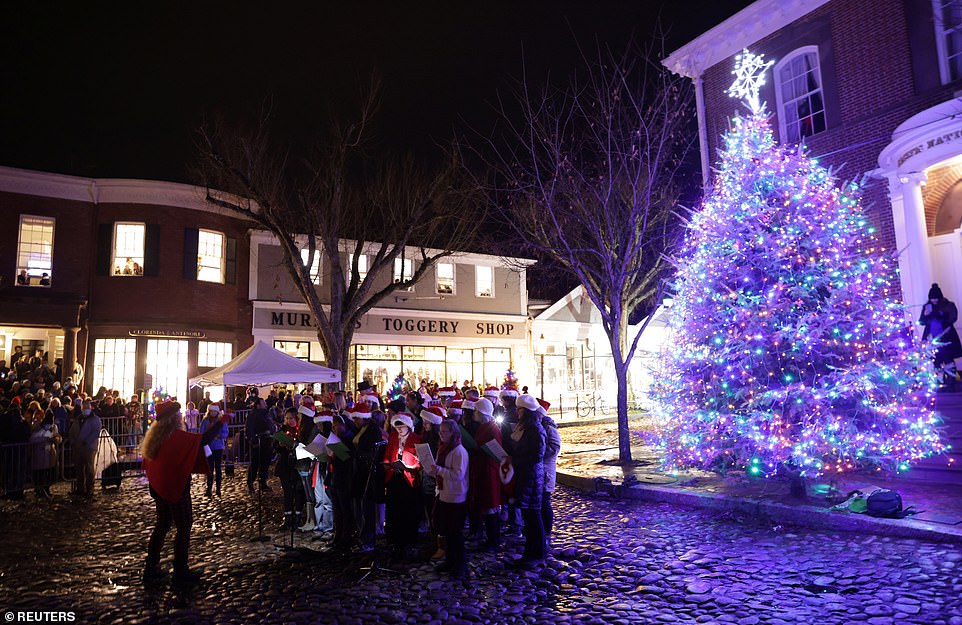 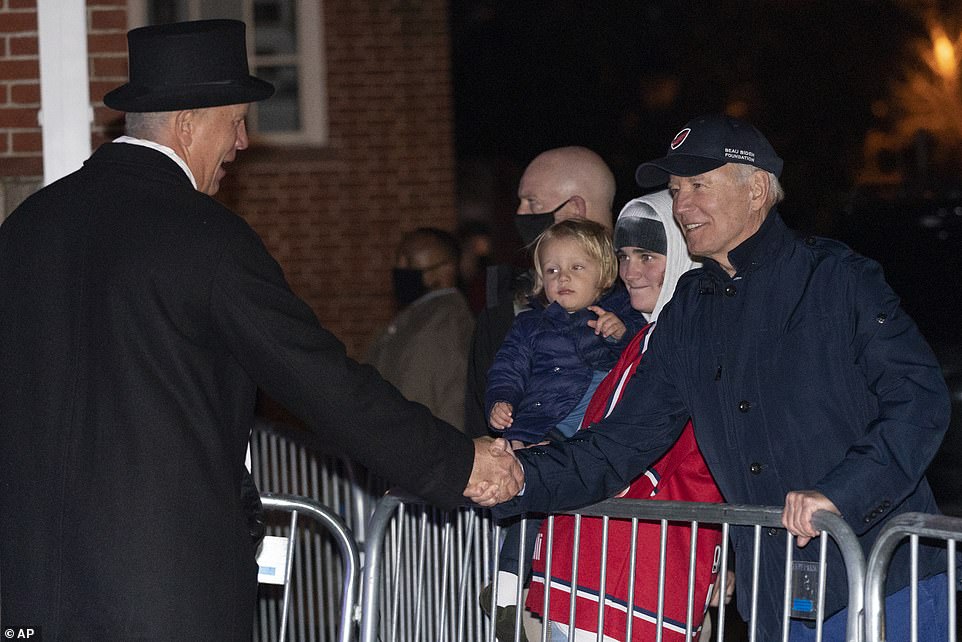 President Biden shakes hands with the town crier, next to him Maisy Biden holds Baby Beau 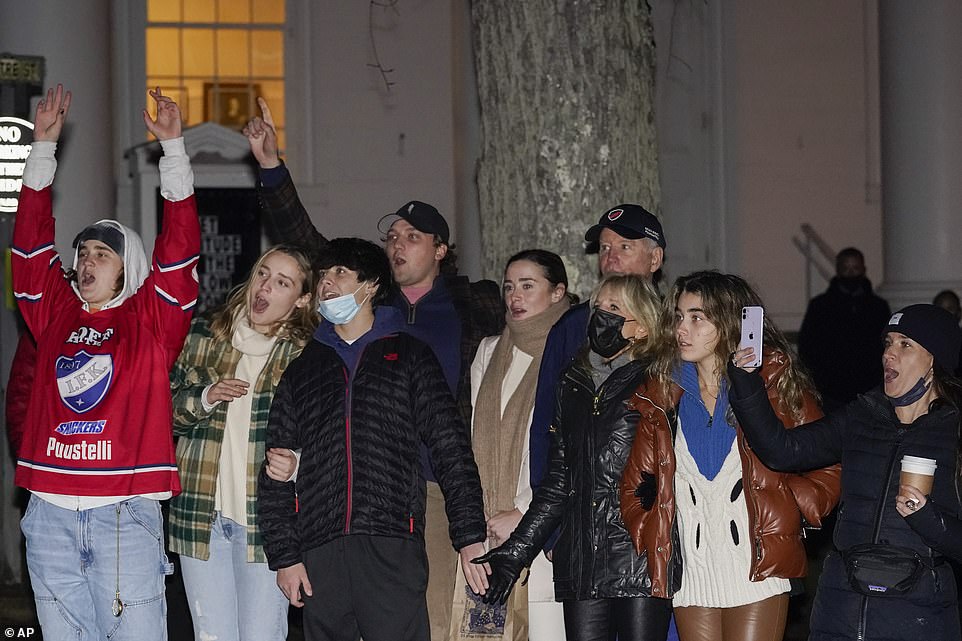 The Bidens’ grandchildren cheered as the tree was lit 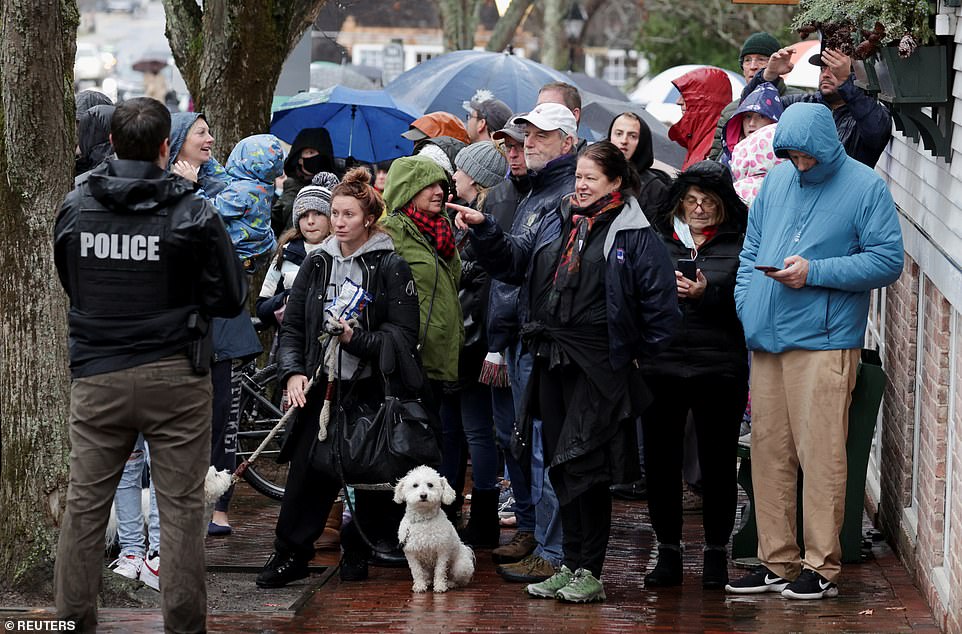 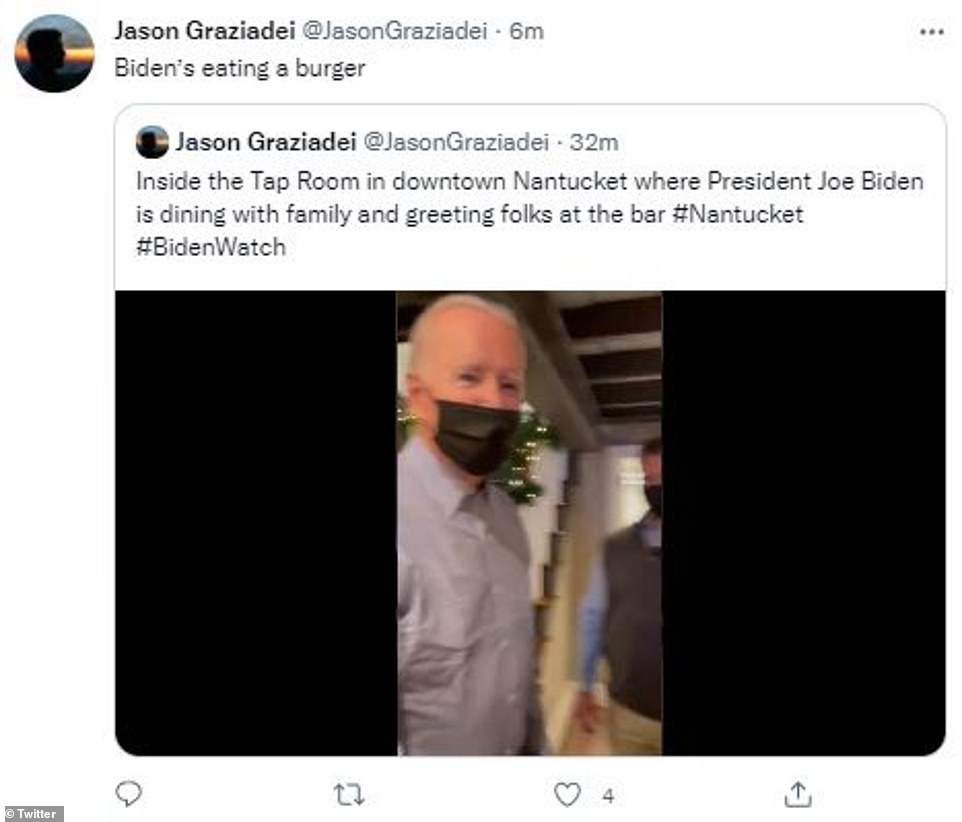 Locals posted their sightings of the president 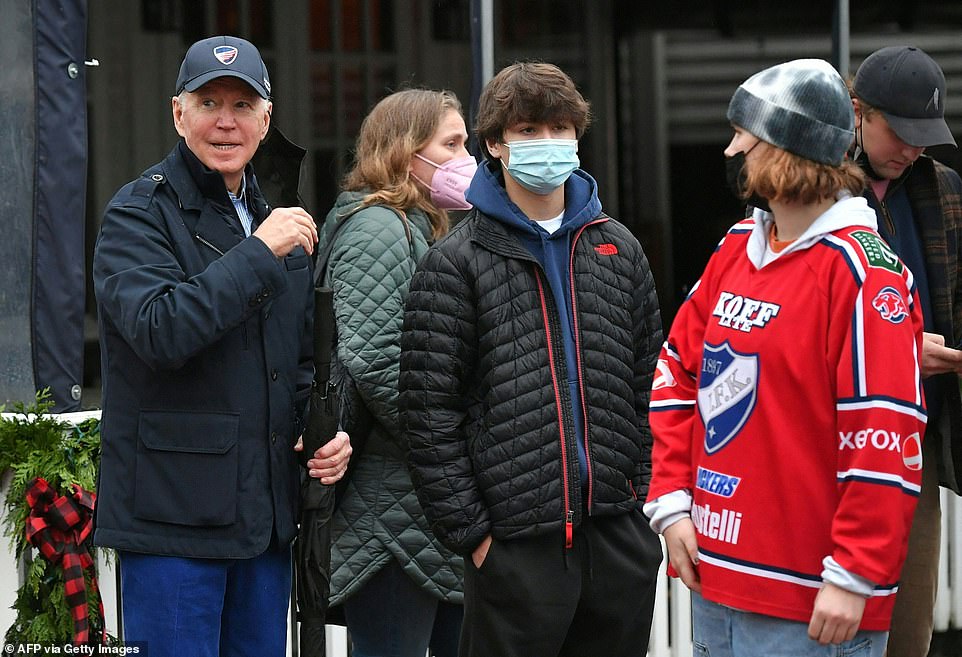 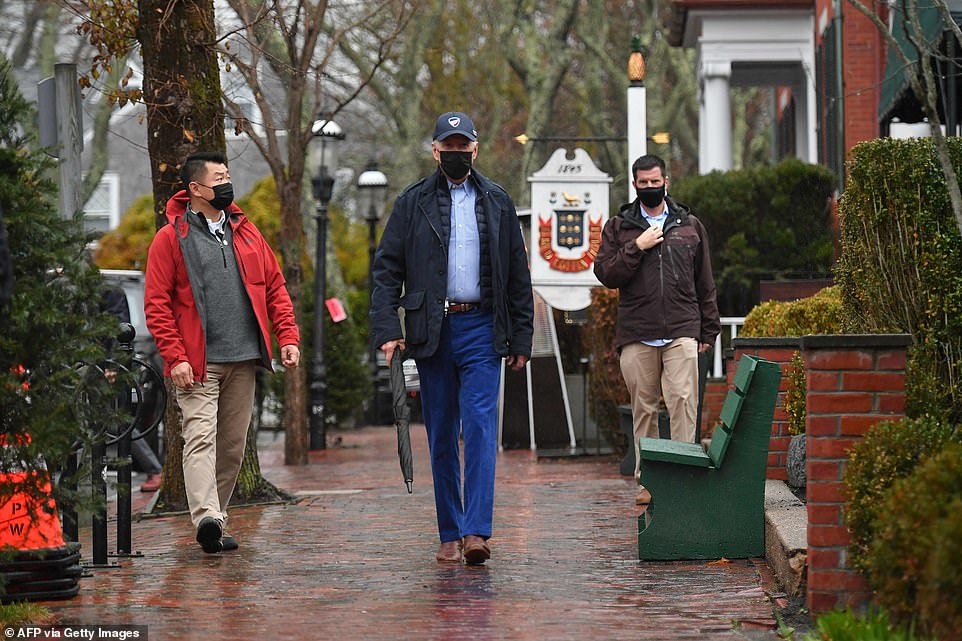 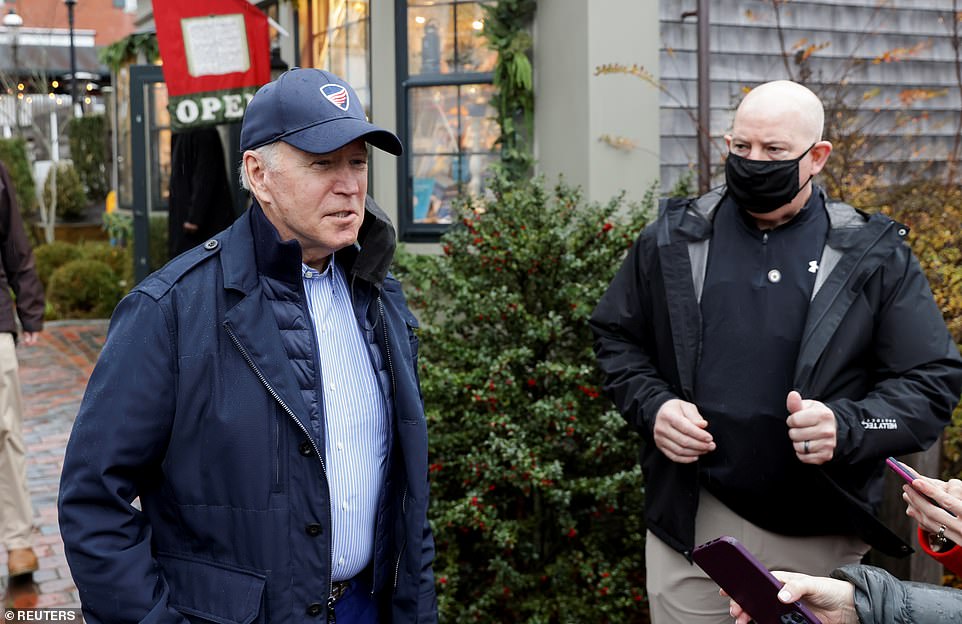 President Biden started his day taking his family to lunch at the  Nantucket Tap Room, which serves traditional New England food and is located in a historic building from 1845 in downtown Nantucket.

The president was spotted shaking hands and taking selfies with patrons while inside. A local reporter noted he had a burger.

Afterward the Bidens stopped Nantucket Bookworks, where staff there said the family had been shopping for 35 years.

Dining out the Friday after Thanksgiving is a longtime Biden family tradition.

The president headed to lunch after announcing his administration will restrict travel from South Africa and seven other countries starting on Monday, following the detection on a highly transmissible new variant of COVID discovered there.

‘We’re going to be cautious, make sure there is no travel to and from South Africa and six other countries in that region. Except for American citizens who are able to come back. We don’t know a lot about the variant except that it is of great concern. It seems to spread rapidly,’ Biden told reporters after his luncheon.

He encouraged people to get vaccinated.

‘Here’s the deal. Every American that has not been vaccinated, should be responsible and be vaccinated from age five years and up, number one. Number two, everyone eligible for the booster shot, should get the booster shot immediately upon being eligible. That is a minimum that everyone should be doing. And you know, we always talk about whether this is about freedom and I think it’s a patriotic responsibility,’ he said.

The move follows similar travel bans by the UK and other European countries after the detection of the new Omicron strain of COVID, which the World Health Organization said is ‘highly transmissible’ and a ‘variant of concern.’

The Bidens will be on Nantucket through Sunday.

The First Family celebrated Thanksgiving with a traditional menu on Thursday after watching the Macy’s Thanksgiving Day Parade and holding a virtual call with troops serving overseas.

‘Grandmom Jacobs’ savory stuffing, is Jill’s family recipe passed down from her grandmother which she has shared with the public.

Dinner was followed by a selection of desserts including apple pie, pumpkin pie, coconut cream pie, and chocolate chip ice cream. The president is known for is affinity of ice cream, previously revealing chocolate chip to be his favorite flavor.

The family is staying at David Rubenstein’s $20 million retreat – a move that drew ire from ordinary Americans, many of whom are struggling to pay for the same Thanksgiving meals they are used to because of soaring inflation.

Scroll down for video 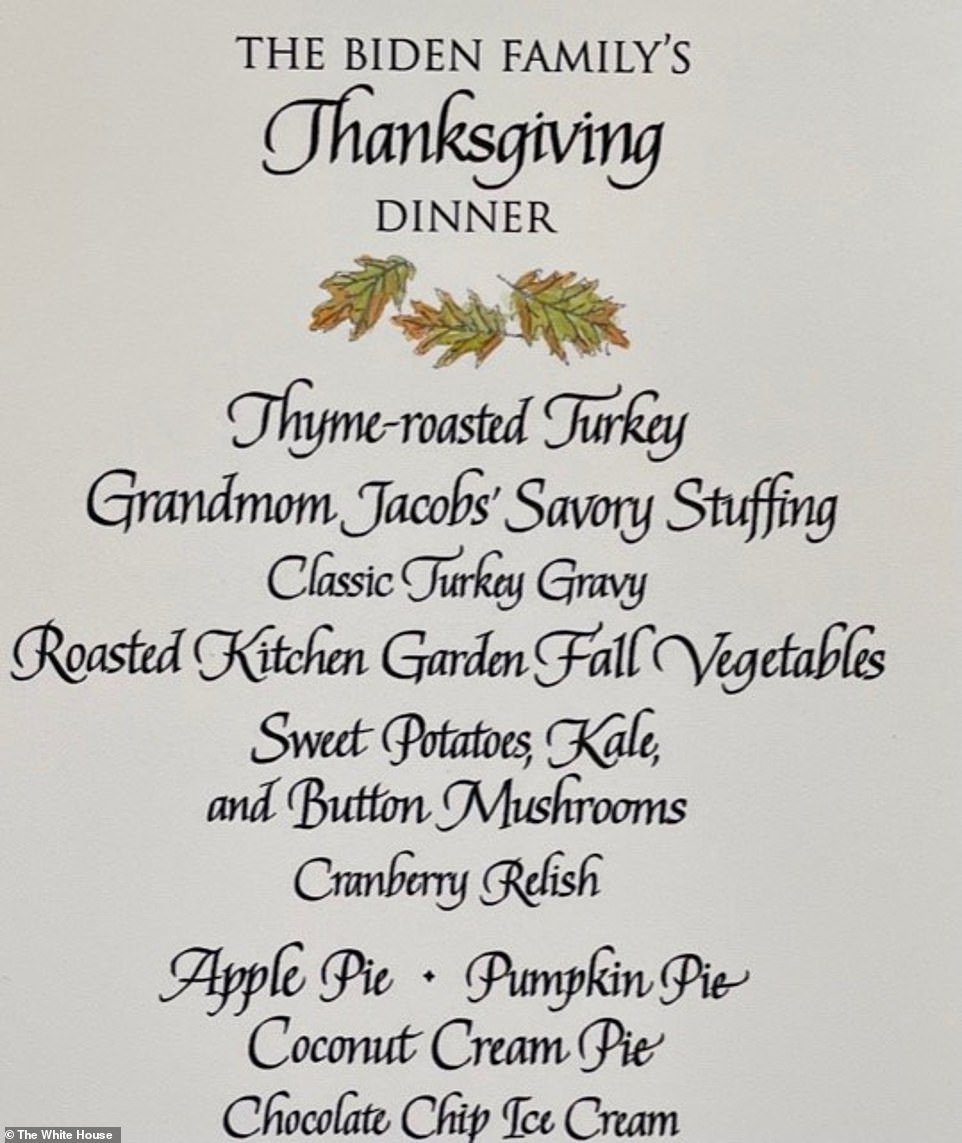 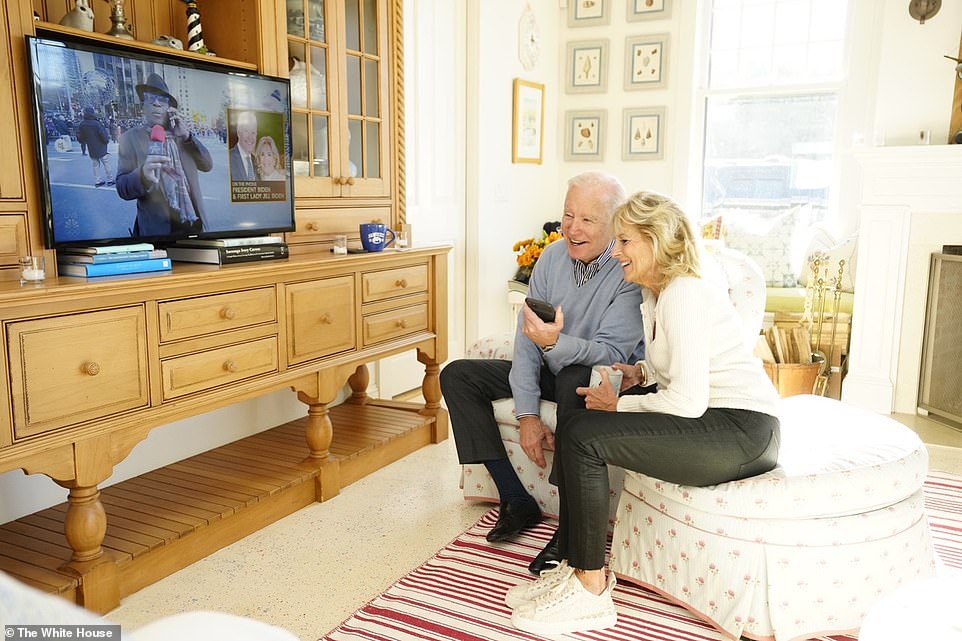 President Biden and First Lady Jill Biden phoned in to the Today show on Thursday morning to speak with host Al Roker, who was broadcasting from the Macy’s parade. The President told him: ‘My message is after two years, we’re back, America is back, there’s nothing we’re unable to overcome, Al, you’re one of the reasons for that, pal. You’re always up, always rooting’. Jill is wearing a pair of $495 Chloe sneakers 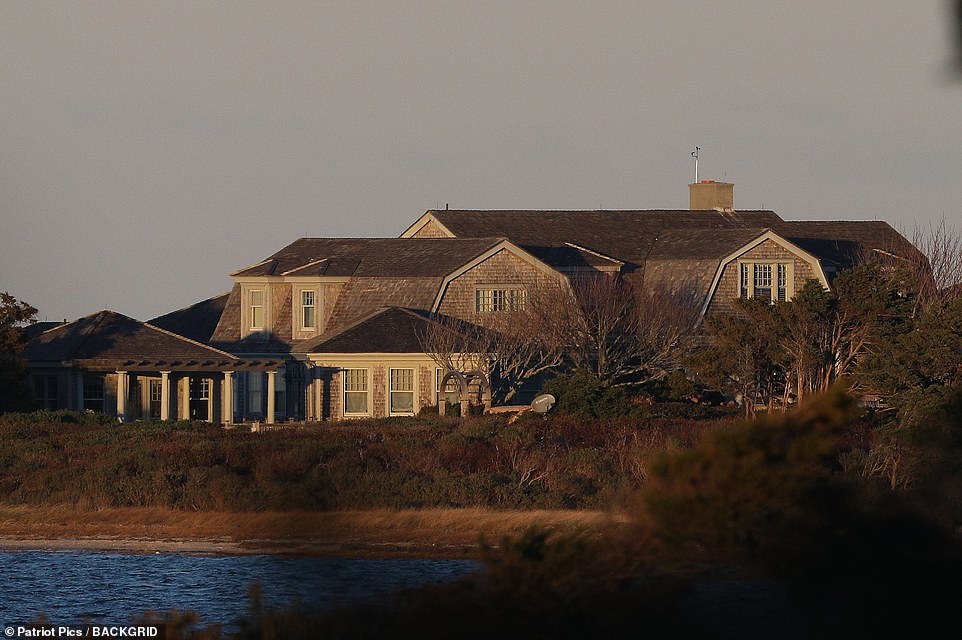 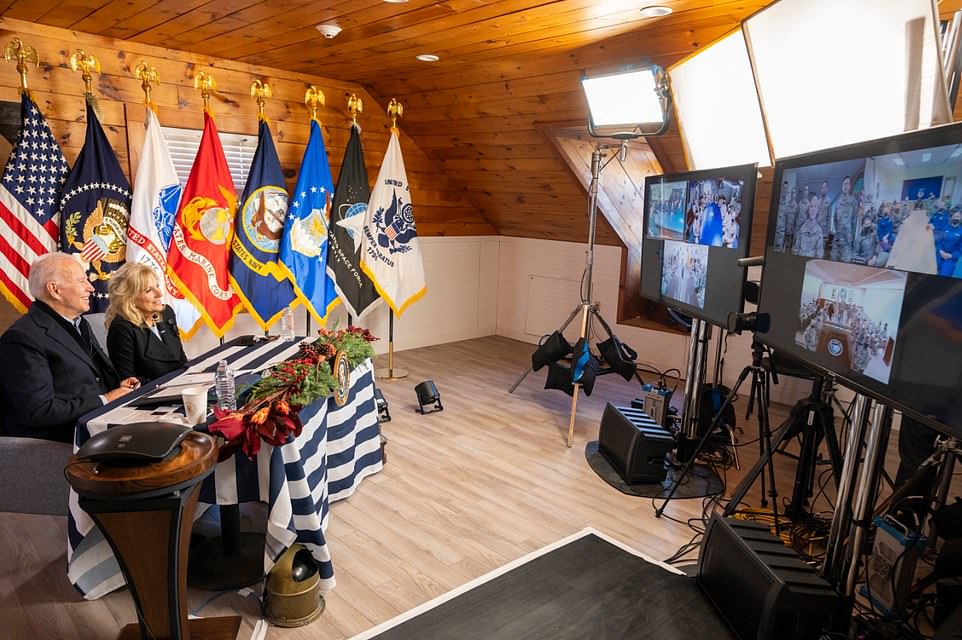 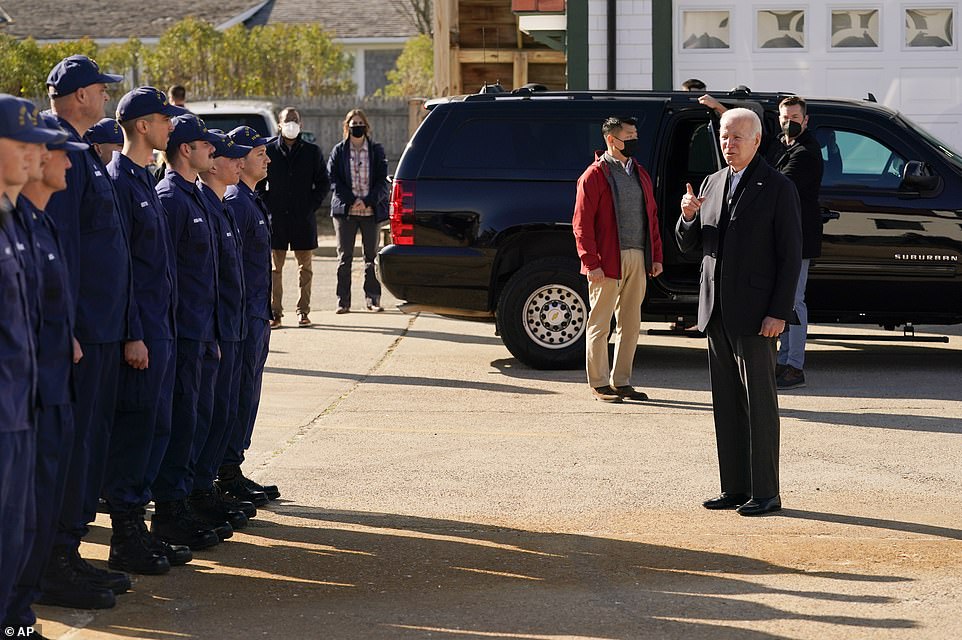 The couple were then whisked to the US Coast Guard Station Brant Point in Nantucket where they had virtual calls with troops around the world, and met with US Coast Guard personnel on the ground 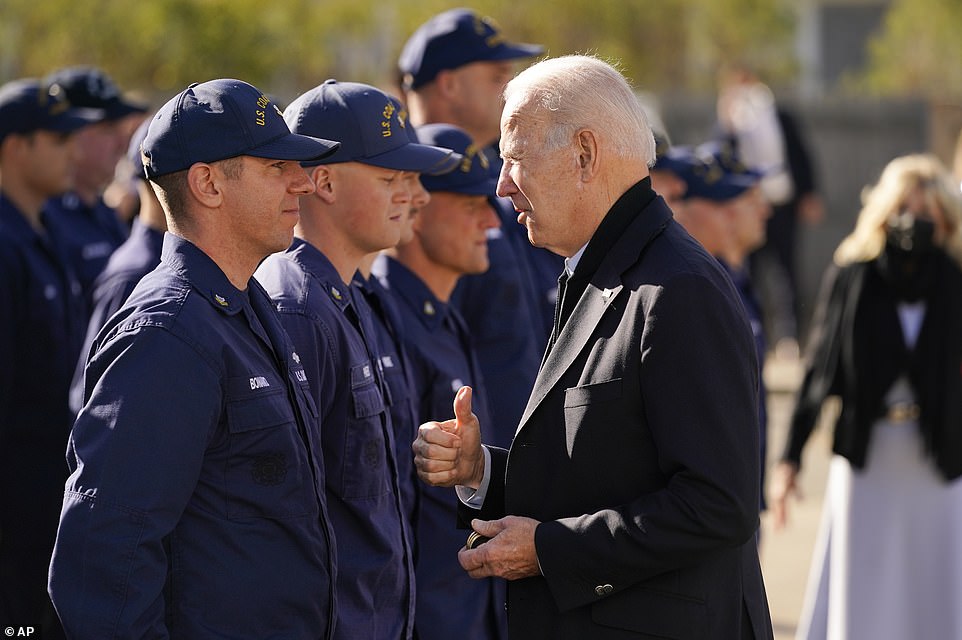 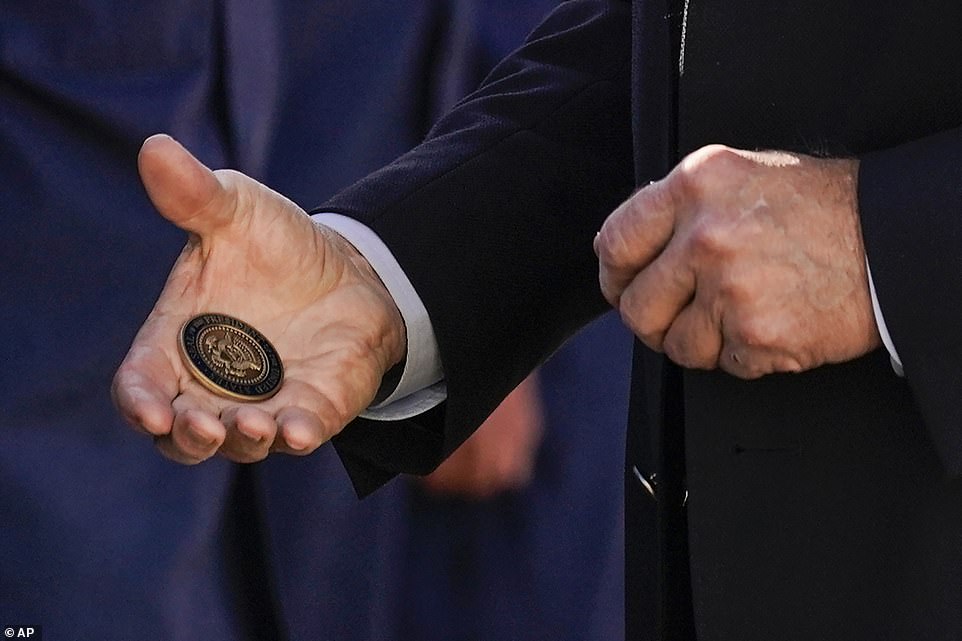 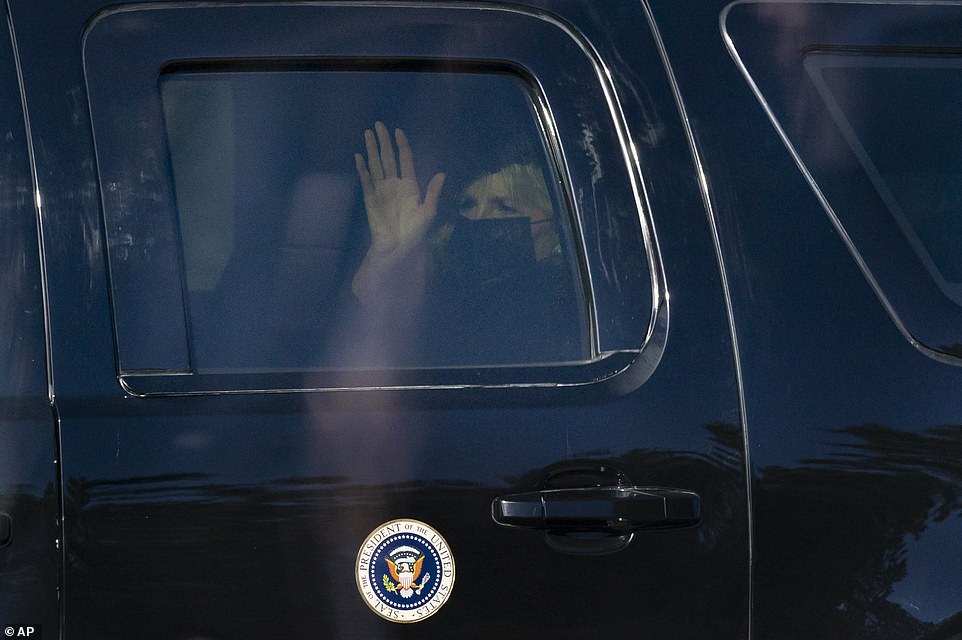 First lady Jill Biden waves from a motorcade vehicle as she and President Joe Biden drive to the United States Coast Guard Station Brant Point in Nantucket, Mass., Thursday, Nov. 25, 2021, where the they will greet members of the United States Coast Guard and have a virtual meeting with service members from around the world to thank them for their service and wish them a happy Thanksgiving

Earlier Thursday, Jill and Joe were pictured cuddled up in a living room on the compound to phone into the Today show on NBC and its broadcast from the Macy’s parade in Manhattan. They spoke with host Al Roker, and gushed about the American spirit never letting up.

Then the couple released a heartfelt video on Twitter, where they thanked troops for their service and commiserated with families who have lost loved ones to COVID.

The Bidens then headed to the United States Coast Guard Station Brant Point on Nantucket where they had virtual calls with troops around the world, then President Biden spoke to some of those who were there in person.

After the call, the Bidens meet outside with about two dozen Coast Guard members stationed at the base.

The president passed around challenge coins that were given to him by the military aide who also carries the presidential football.

‘I don’t have coins,’ Jill Biden joked as she just shook hands with the service members. They both spent several minutes talking to the Coast Guard members and posing for photos.

Biden said he was thankful for the service members and pointed out throughout his more than forty years in politics he has met with troops around the world. 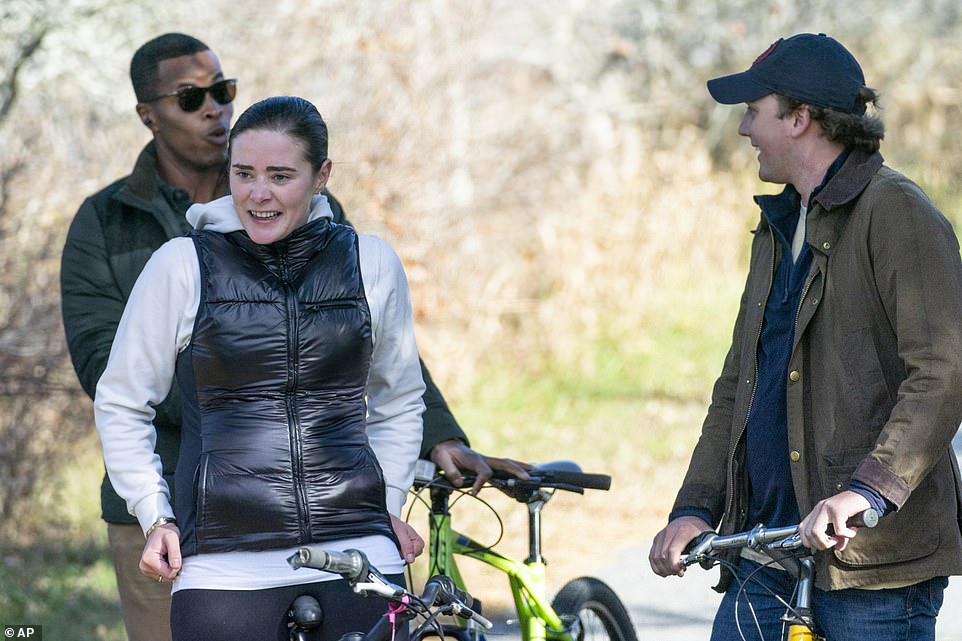 Naomi Biden, second from left, and her fiance Peter Neal, right, stop on the bikes in Nantucket, Mass., Thursday, Nov. 25, 2021, for President Joe Biden and first lady Jill Biden to pass in a motorcade 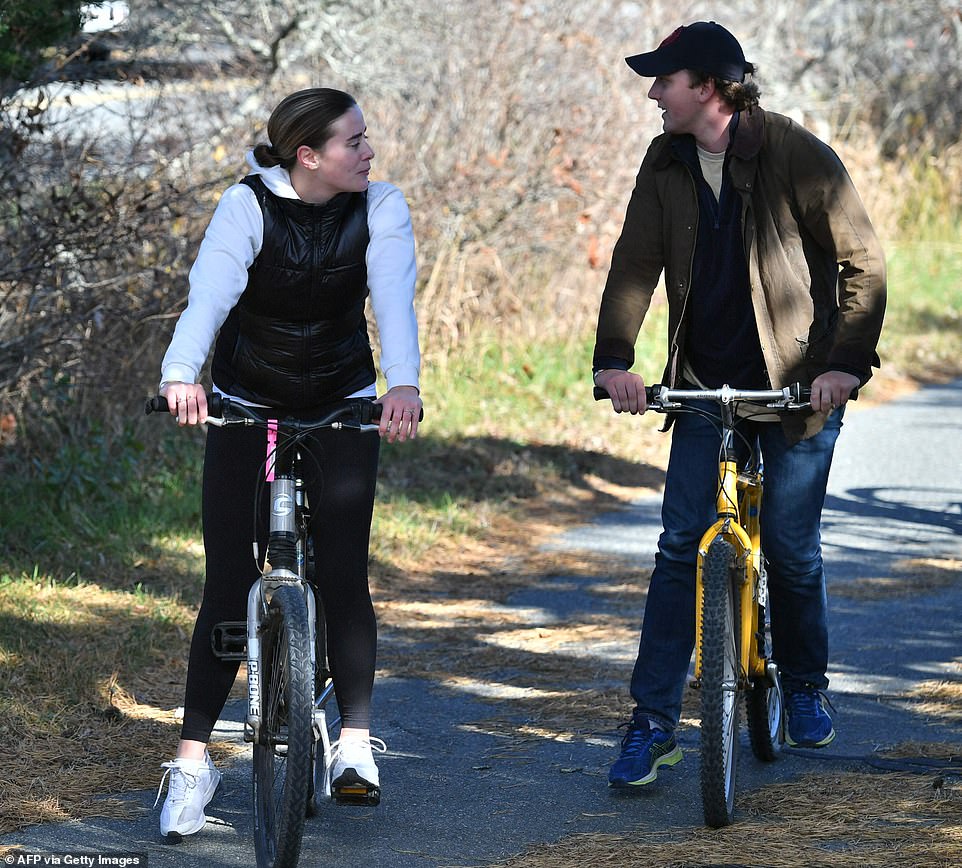 ‘Look and see them. That’s who they see. They don’t see us here. They see them. It makes me proud,’ he said.

During their call with service members, the Bidens talked to all six branches of the military – Army, Marine Corps, Navy, Air Force, Space Force, and Coast Guard.

‘As we give thanks for what we have, we also keep in our hearts those who we lost and those who have lost so much. And those who have an empty seat at their kitchen table or dining room table this year because of this virus or cruel twist of fate or accident. We pray for them,’ the President said.

He went on: ‘As we gather together again, our tables and our hearts are full of grace and gratitude for all those we love and as Commander in Chief, I’m especially grateful to our service members and their families for their sacrifices to our nation.’