Phil Collins’ ex-wife Orianne Collins, 47,  announced that she was filling for  divorce from her husband of one year, Thomas Bates, 32, on Thursday,

The jewellery designer took to Instagram with a note addressing the wedding, including a line reading: ‘I believe the emotional stress of the COVID quarantine caused me to act in ways to do things that were out of character’.

The parting comes more than a year after the pair exchanged vows August 2, 2020 at the Graceland Wedding Chapel in Las Vegas.

The latest: Phil Collins’ ex-wife Orianne Collins, 47, on Thursday announced that she was filling divorce from her husband Thomas Bates, 31. The former couple was seen in Miami last month

Orianne pointed to the pains of the pandemic as a key factor in the split, writing in her concise statement: ‘I believe the emotional stress of the COVID quarantine caused me to act in ways to do things that were out of character’.

She vowed that she would handle the situation with resiliency, while sending her gratitude to those who have had her back.

She went on: ‘Fortunately I have faced challenging situations before and like I always have, I will muster up the strength I can, the best team I can find and the courage to do the right thing… Thank you to so many who have supported me in the past – it means so much to my family and me.’

She said she was looking to handle the split with privacy beyond her initial statement.

Orianne went on: ‘To be clear: my intention is to let our attorneys deal with this resolution behind closed doors, and not in the media which is why I am posting the statement on my personal account.’

Amid her split from Bates, Orianne remains embroiled in litigation with Phil Collins over the $40 million estate Florida mansion they once shared. 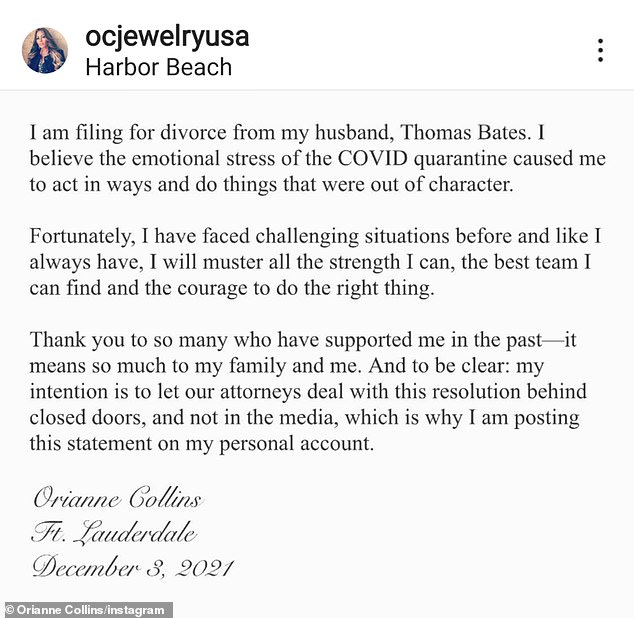 Collins, a jewelry designer based out of Fort Lauderdale, Florida, took to Instagram with a note addressing the marital split

In October, a judge granted Orianne clearance to sue Collins, 70, over finances related to the property.

An insider told Page Six: ‘The original deal was that she gets half the value of the house. That was the agreement they made. She’s suing for half, and he tried to get [the case] dismissed. Now the judge ruled that her case can move forward.’

The Sussudio artist last year filed legal paperwork to evict Orianne from the premises after learning that she and Bates had exchanged vows.

Orianne and Bates moved out under the terms of a partial settlement ‘to get her out of the house and relocate, so he could sell it,’ an insider told the outlet.

The insider told the outlet that Orianne ‘was never evicted’ from the home, and ‘feels really good’ about the case moving forward.

A rep for Collins told the outlet that ‘the [new] motion argued that Orianne’s case was filed in the wrong court, and [she] had to refile in the correct court, so the only significance in this ruling is the court that she’s going to lose in.’ 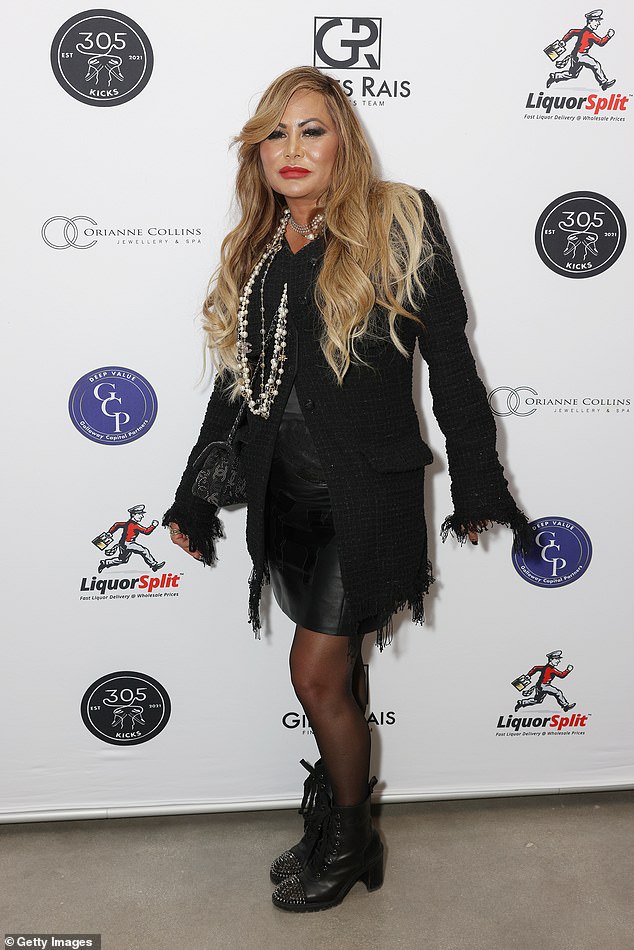 Details: Collins pointed to the headaches brought about by the pandemic as a key factor in the split (Orianne, pictured last month)

The news comes a week after Orianne discussed her bitter split from Phil in a candid interview – in which she claimed the rocker ‘made her out to be a b***h.’

Speaking to The Sun, Orianne said: ‘We were living together in Miami Beach with our children for more than six years. It was my house as much as his house.

‘And when he found out I got married, he got super mad and that was it… It is sad to be honest. It is very sad the way he puts the view where I am pitched as a very bad person.

Declaring that she ‘hadn’t done anything’, she spoke of her then-love with toyboy Tom, saying: ‘We found each other and love each other. That is what happened. But some people say: ‘why did she do that. What a b***h’.’

The couple became embroiled in a bitter legal dispute with the Genesis star last year over their Miami home. He tried to have his former spouse kicked out in October 2020 after finding out she had secretly remarried to Thomas and moved him in.

The mother-of-three hit back, however, refusing to leave and claiming she was entitled to half its value under a ‘verbal cohabitation agreement’.

Orianne and her attorneys angered a Miami judge by including a slew of humiliating personal remarks about the drummer’s hygiene and sexual performance in her filings, which she was ordered to remove.

The pair agreed she could stay until late January, giving her time to find a new residence for their youngest sons, Matthew, 16, and Nicholas, 20.

The exes tied the knot in 1999 before splitting up just seven years later, with the artist paying $47million (£33.2million) to Orianne in their settlement. 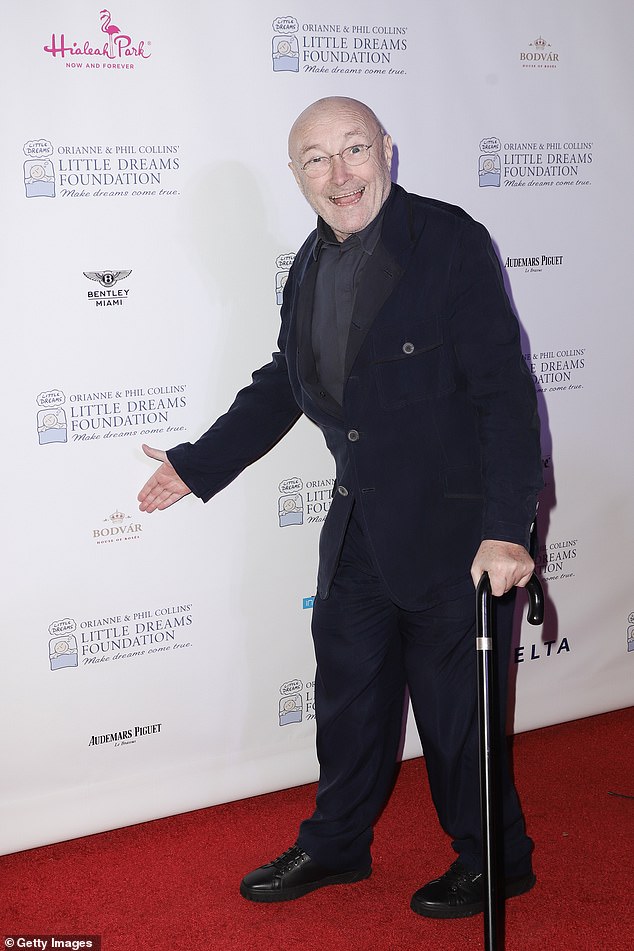 Former love: Phil is seen in November 2019 at an event in Miami

The businesswoman, who also shares daughter Andrea with ex-husband Charles Mejjati, was packing her bags and getting ready to leave the rocker’s abode ‘in weeks’ after snapping up a plush, new waterfront home.

The lavish pad boasts a pool, spa, home theatre and a dock big enough for a 90ft yacht.

Orianne also revealed she was managing Tom’s aspiring pop career, with Tom saying he understood that he is now ‘forever linked’ to Phil.

He added that the connection will be a ‘footnote’ in his career and that he has ‘nothing but respect’ for the musician and his family.

He also said the In the Air Tonight star had long influenced his writing and performing, even before he met Orianne – but he worries that criticism from Phil’s fans may stall his career. 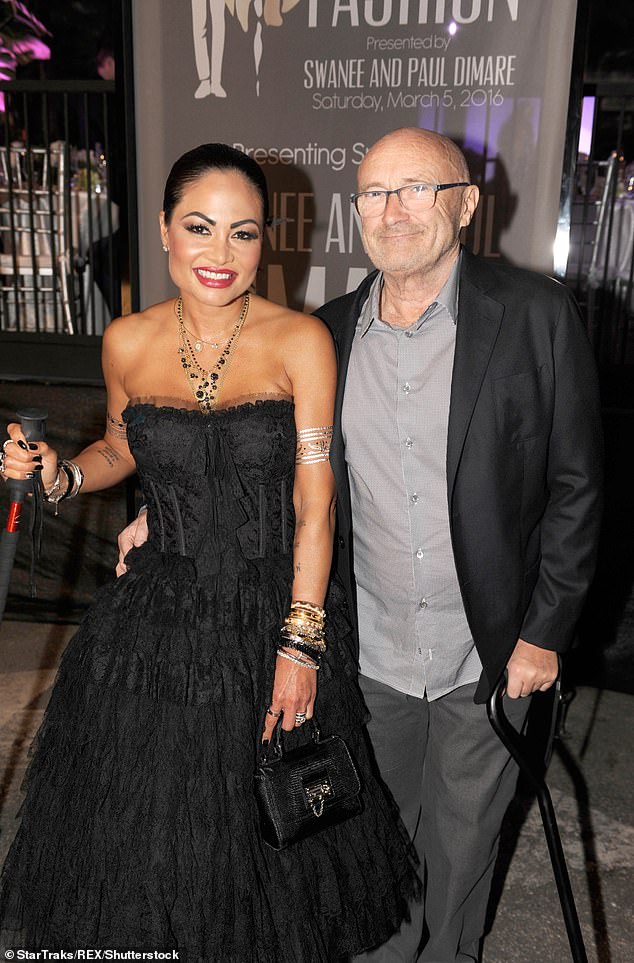