Chief of Defence Staff (CDS) General Bipin Rawat, his wife Madhulika Rawat, an Army Brigadier, and ten others perished when an Indian Air Force (IAF) Mi-17V5 helicopter carrying them crashed into a heavily wooded area of the Coonoor ghat in the Nilgiris in western Tamil Nadu on Wednesday afternoon. The cause of the chopper crash, in which there is only one survivor, is being investigated.

Defence Minister Rajnath Singh said an inquiry has begun into the crash and that their bodies will be brought to the national capital in the evening.

Here are the live updates:

‘Gen. Rawat had the calibre, the vision and a heart to be the first CDS’

Gen. Bipin Rawat’s untimely demise is an extremely irreparable loss for the Army. Having seen him at close quarters during the Doklam crisis during my tenure in Kashmir, as well as the Military Secretary, he had the qualities of the best leader.

The fact that he was picked up at the first Chief of Defence Staff (CDS) was because he met all the requirements. He had the calibre, he had the vision, and he had a heart to be the first CDS. He believed in things, he believed in the whole Army, the whole armed forces going on together. And he worked for it. – Lt Gen A K Bhatt retd

The last five or six years have seen several measures that went into indigenisation of speciality garments and fabrics for the Defence forces and one of the key persons in this effort was General Bipin Rawat, who was earlier the Chief of Army Staff, says S.K. Sundararaman, deputy chairman of Southern India Mills’ Association.

“I met General Rawat at least half a dozen times,” said Mr. Sundararaman, who is also the former chairman of Indian Technical Textile Association (ITTA). The ITTA held an Army sourcing conference in 2016-2017 and General Rawat who was then the Chief of Army Staff was invited as the chief guest. He would back his officers for their ideas. “He empowered his people to take decisions,” Mr. Sundararaman said recollecting his meetings with General Rawat, who died in a chopper crash in the Nilgiris on Wednesday.

Five or six years ago was the transition period when the government wanted to indigenise the speciality clothing and textile requirements of the Defence. Today, almost all the textile and clothing items except a few, such as high altitude gloves and sleeping bags, are made by the domestic industry. All textile sourcing was through the Master-General of the Ordnance.

General Rawat spearheaded the effort to indigenise as he allowed his team to go out and take the required measures to make the products locally. He supported the officers with the procurement processes, said Mr. Sundararaman.

All India Trinamool Congress members walked out of the Rajya Sabha after Deputy Chairman refused to allow Opposition members to pay condolences to family of General Bipin Rawat, his wife Madhulika Rawat and 11 others.

We have walked out in protest of the fact that the Chair did not allow any Opposition party to condole the tragic death the Chief of Defence Staff and 12 others on record. Mourning is also monopolised by this regime, TMC leader Sushmita Dev said.

The Indian Air Force (IAF) has launched an investigation into the circumstances that led to the tragic crash of helicopter Mi-17V5 that killed Chief of the Defence Staff General Bipin Rawat, his wife Madhulika Rawat and 11 others near Coonoor in the Nilgiris, Tamil Nadu, on Wednesday.

According to police sources, the IAF’s Accident Investigation Board officials visited the crash site for field investigations.

Telangana Governor Tamilisai Soundararajan arrives at the Shri Nagesh Barracks in Wellington, Coonoor to pay her respects to the military personnel who died in the chopper crash. 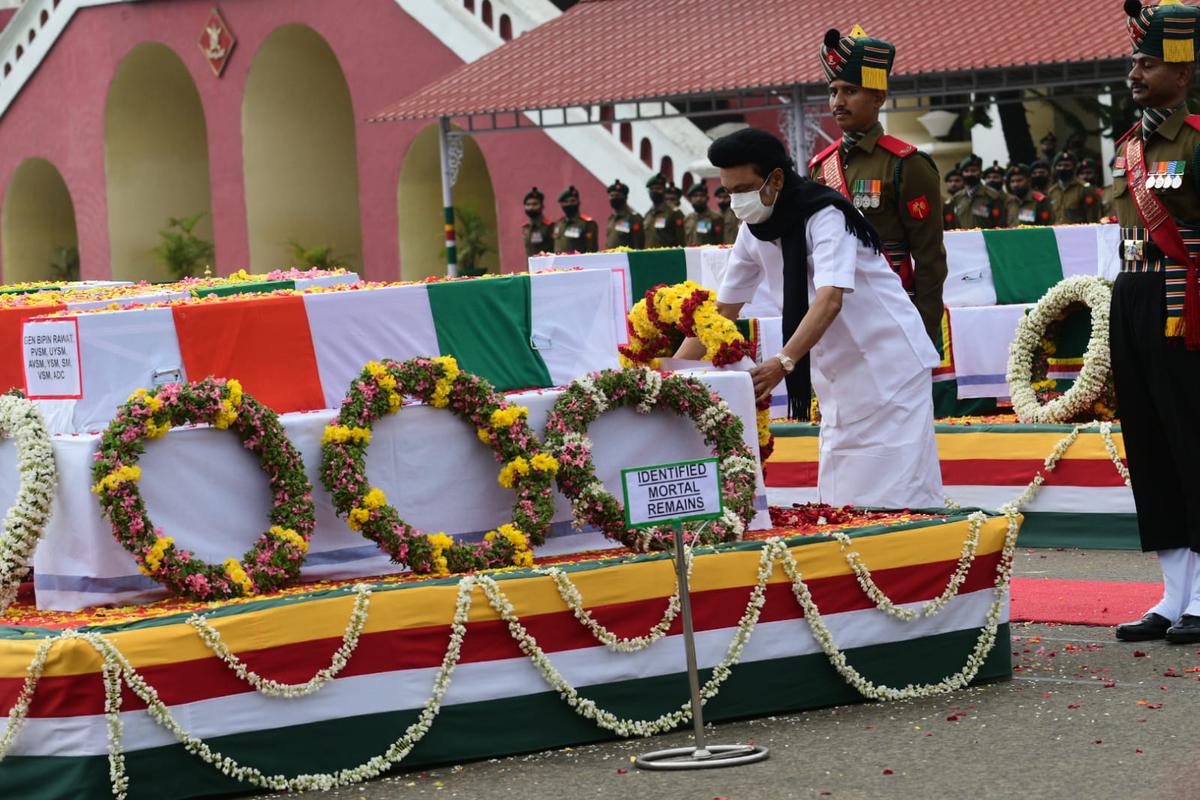 Leader of Opposition Mallikarjun Kharge urges the chair to allow all floor leaders to speak on the tragic incident of Conoor, but  Deputy Chairman Harivansh Narayan Singh disallows it.

Defence Minister Rajnath Singh, in his statement in the Rajya Sabha, said an inquiry has begun into the helicopter crash that killed Chief of Defence Staff Gen. Bipin Rawat and 12 others, and that their bodies will be brought to the national capital in the evening.

“Group Captain Varun Singh is under hospital care. Gen Rawat to be cremated under full military honours. Others too to be accorded appropriate military honours,” he informed the House.

The Cockpit Voice and Flight Data Recorder of the Mi-17V5 chopper of the Indian Air Force, that crashed with Chief of Defence Staff Bipin Rawat, his wife Madhulika Rawat and 12 defence personnel on board at Kattery in the Nilgiris, on Wednesday, were recovered on Thursday morning, a source said.

Examination of the Cockpit Voice and Flight Data Recorder will give insights into the crash when the chopper was heading to the Defence Services Staff College (DSSC), Wellington, from the Air Force Station, Sulur, near Coimbatore.

The mortal remains of General Bipin Rawat and others will be brought to the national capital by today evening.

Union Defence Minister Rajnath Singh informs the Lok Sabha that Gen. Bipin Rawat was on a scheduled visit to Defence Staff college in Tamil Nadu’s Wellington. At 12.18 Sulur helipad lost contact with the helicopter he was on. Locals rushed to the spot and saw that the helicopter was aflame.

Local authorities recovered who they could and rushed them to a nearby hospital in Wellington, Mr. Singh said while adding, 13 out of 14 people on board had died.

The Defence Minister also read out the names of the deceased officers and staff members who were on board.

Rajya Sabha Deputy Chairperson Harivansh Narayan Singh read obituary of General Bipin Rawat after which the members observed a two-minute silence as a mark of respect for Gen. Rawat, his wife Madhulika Rawat and 11 others.

Opposition MPs have decided to suspend their sit-in protest for a day to pay tribute to Chief of Defence Staff General Bipin Rawat and other soldiers who died in the tragic helicopter crash.

Today is the 9th day of their protest against the Government for suspending 12 Rajya Sabha members.

Teacher turns 100: A look back