By Ashleigh Gray For Dailymail.Com


Angelina Jolie was spotted out and about with her son Pax Thien Jolie-Pitt on ex husband Brad Pitt‘s 58th birthday.

The mom-of-six spent quality time with her second oldest child, 18, as they enjoyed lunch at Sugarfish and shopping at Fred Segal in West Hollywood.

Angelina, 46, wrapped up in a black trench coat and covered her face in a disposable black face mask. 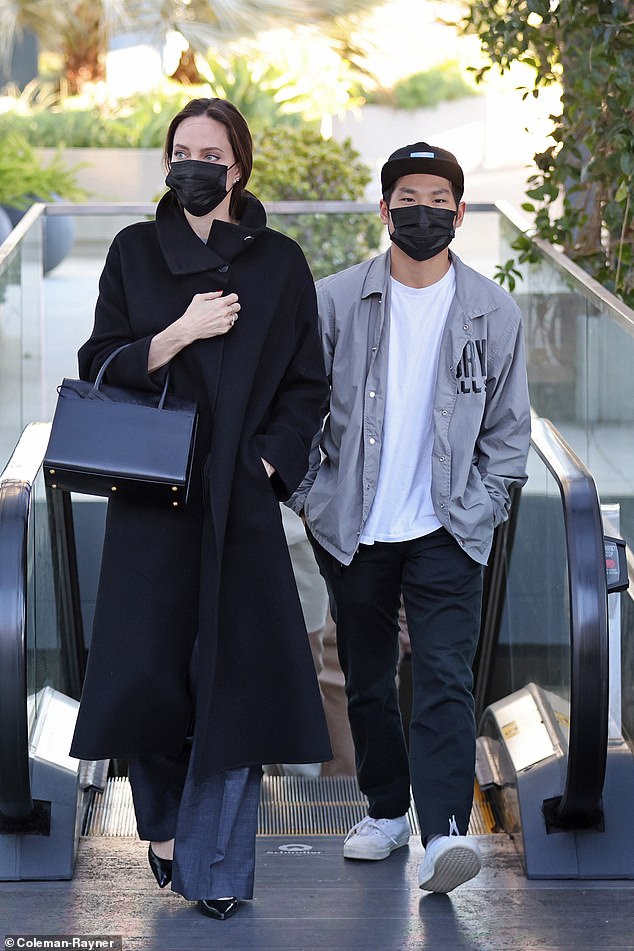 Saturday out: Angelina Jolie was spotted out and about with her son Pax Thien Jolie-Pitt on ex husband Brad Pitt’s 58th birthday

Angelina looked spiffy in a pair of grey, flared dress pants that peeked out from under her outerwear.

The movie star paired them with black patent leather heels.

She wore pendant earrings and sported a chic red manicure, which was visible as she held onto her coat.

Her dark hair was parted off center and pulled back behind her head. 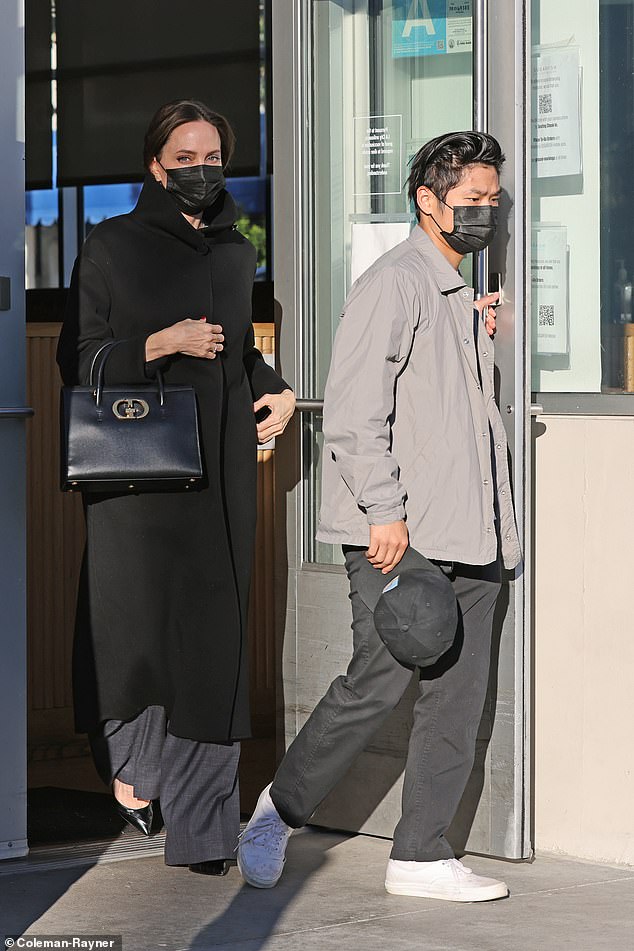 One-on-one: The mom-of-six spent quality time with her 18-year-old second oldest child as they enjoyed lunch at Sugarfish and shopping at Fred Segal in West Hollywood

Over her mask her blue eyes stood out with black eyeliner and some understated mascara, and her dark brows were neatly shaped.

Pax looked much more casual in a pair of dark trousers, white sneakers, and a white crewneck t-shirt.

His look was topped with a light grey windbreaker jacket, and he had a black hat handy. Like his mom, he also wore a black face mask. 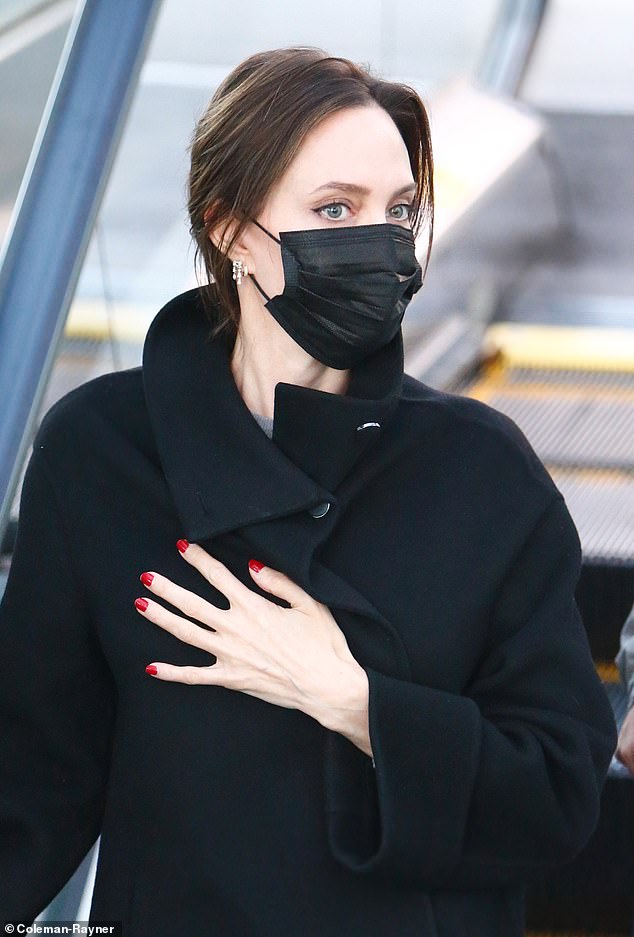 Sleek: Angelina, 46, wrapped up in a black trench coat and covered her face in a disposable black face mask

The Eternals star was recently in Washington, DC with her daughter Zahara Marley Jolie-Pitt, 16.

She began the caption, ‘Honored to visit Washington, DC, with Zahara, working with advocates and lawmakers to modernize and strengthen the #ViolenceAgainstWomenAct to include protections for children’s health and safety, communities of color, tribes, LGBTQ survivors, rural areas, and all survivors.’

The filmmaker looked professional and feminine in a white, short-sleeve button-up shirt that she tucked into a long, pleated skirt. 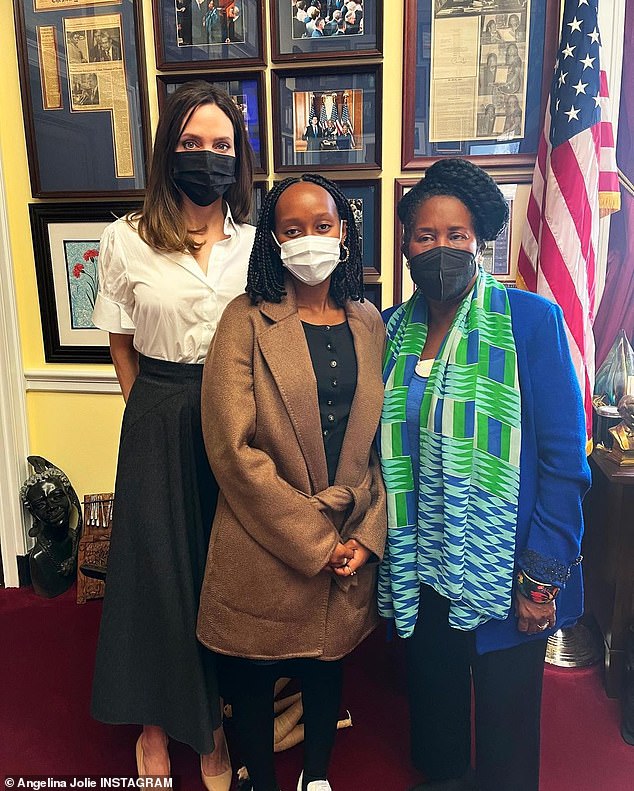 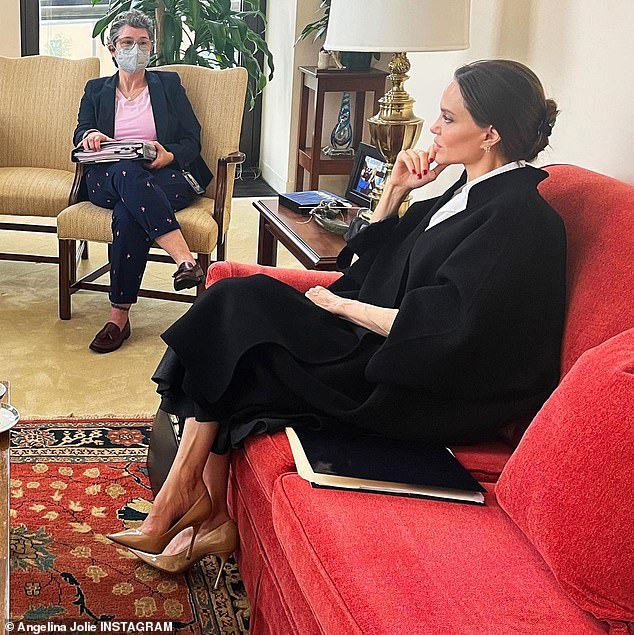 Advocacy: The filmmaker meets with Senator Lisa Murkowski (Alaska) to update the Violence Against Women Act

Though Brad and Angelina have been declared legally single since 2019, they’re still working out details pertaining to custody of their six children – Maddox, 20, Pax, Zahara, Shiloh, 15, and twins Knox and Vivienne, 13.

In September it was revealed that Brad requested a review of the custody case after a court disqualified a private judge who granted him joint custody.

Lawyers for the star filed a petition for review with the California Supreme Court after the disqualification of Judge John Ouderkirk in July, effectively voiding the joint custody ruling, according to People.