A brazen anti-vaxxer somehow managed to board two planes without a face mask or a vaccine passport during a bizarre 14-hour jaunt between three Australian states – before she bragged about it online.

Anna-Rose Richards, whose Instagram account was shut down last year for spreading misinformation about Covid-19, posted a series Instagram stories on Sunday to document her trip from Perth to the Gold Coast, with a detour via Hobart.

Western Australia‘s borders are closed to all states until February 5, but it is possible to book a seat from there on limited flights to other capital cities, so when Richards saw one to Tasmania, she jumped at the opportunity.

In her lengthy stories, she repeatedly claimed ‘I know my rights’ and boasted about her ‘flawless strike rate’ navigating her way around different Covid rules. 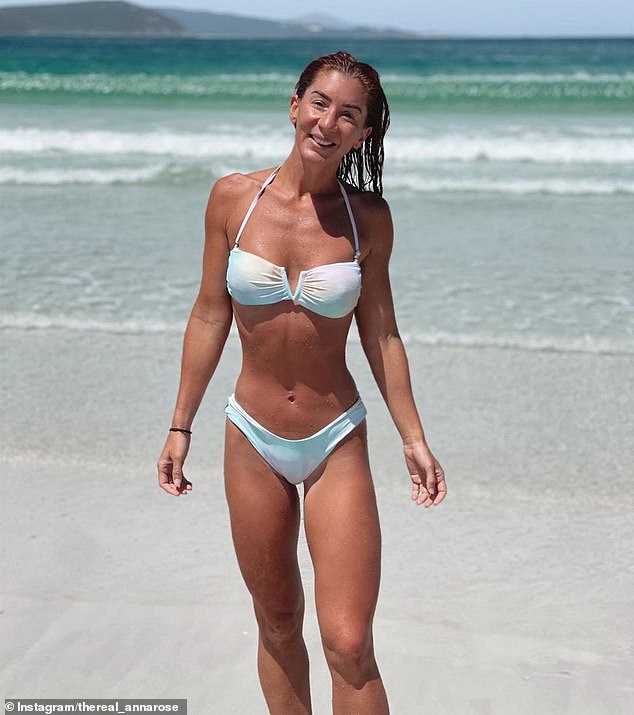 Richards claimed she read every government website and rule to ensure she squeezes through every loophole but never actually breaks any laws, before realising she’d made a series of blunders upon arrival at Hobart Airport.

‘So I get off the plane and everyone is showing their phone. “F**k”, I thought. I knew immediately I missed a very important piece of information,’ she wrote.

‘Turns out I missed several.’

What Richards missed was that Tasmania requires all arrivals to be vaccinated, and to have registered their details with the state government before travel.

Richards claims she maintained a happy disposition while refusing to show her non-existent vaccine passport to state border forces. 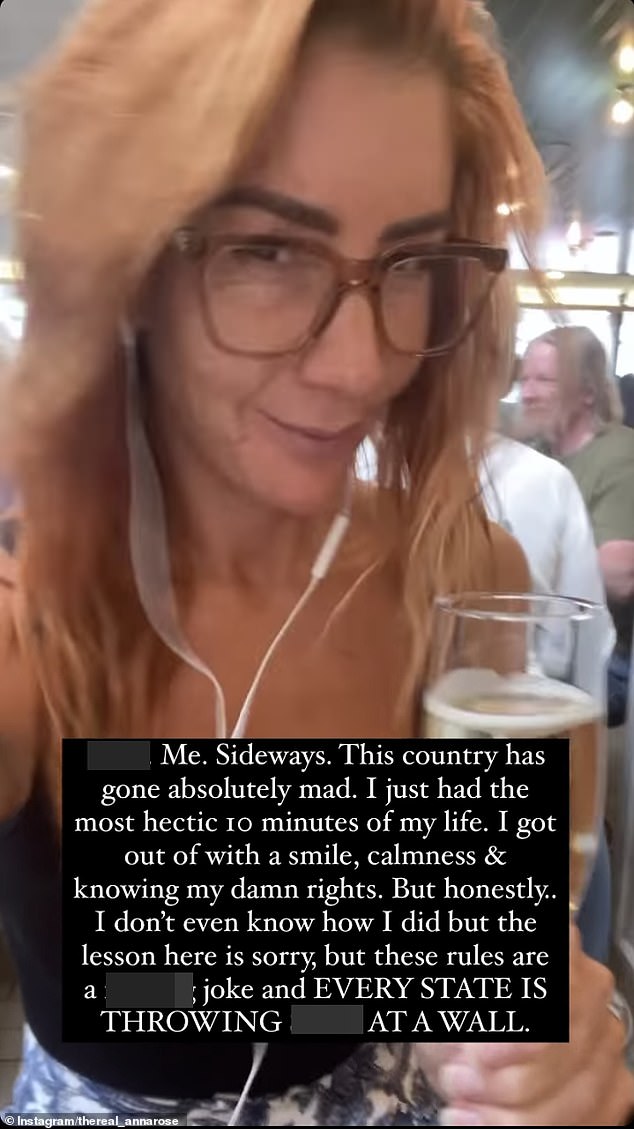 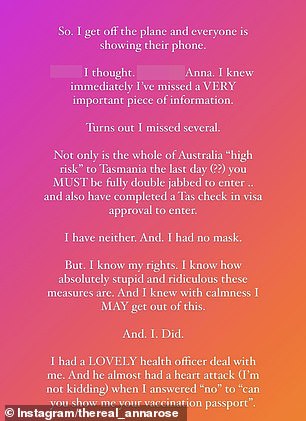 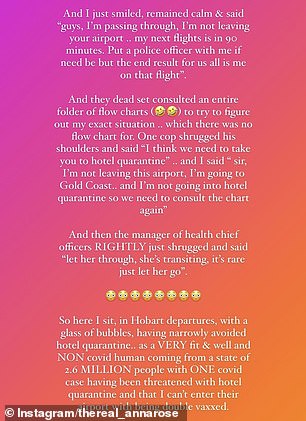 Richards said the manager eventually agreed to let her through the gates because she was catching a connecting flight.

‘So here I sit in Hobart departures, with a glass of bubbles, having narrowly avoided hotel quarantine,’ she said.

Daily Mail Australia contacted the Tasmanian Department of Health and Richards for comment.

After a bizarre rant about the government’s Covid policies and bragging about her ‘very wealthy, very influential girlfriends’, she posted a selfie at home on the Gold Coast. 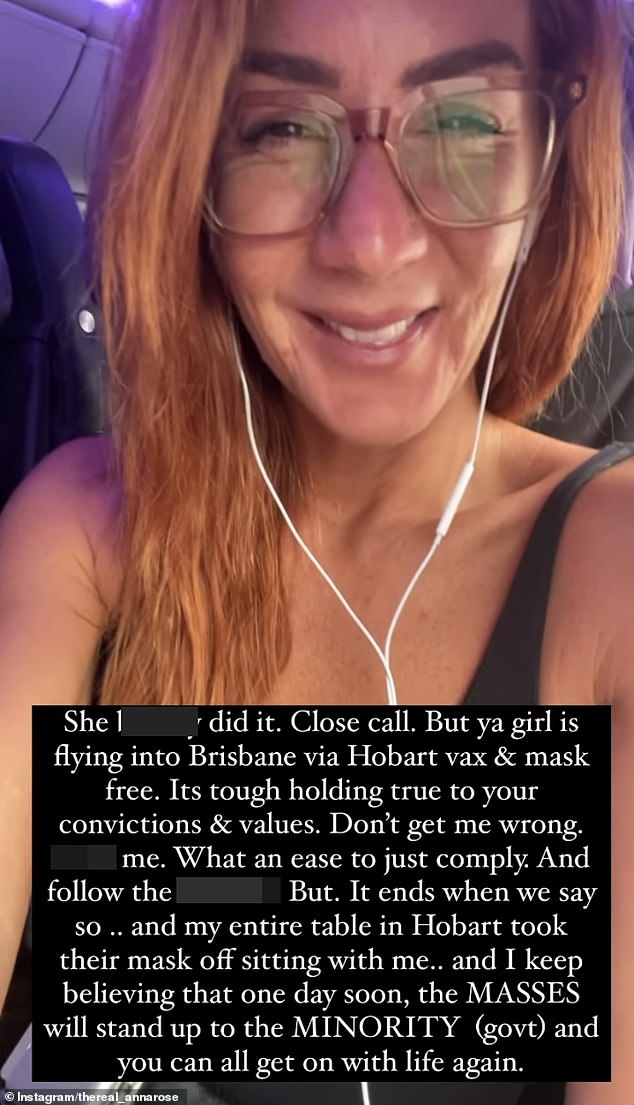 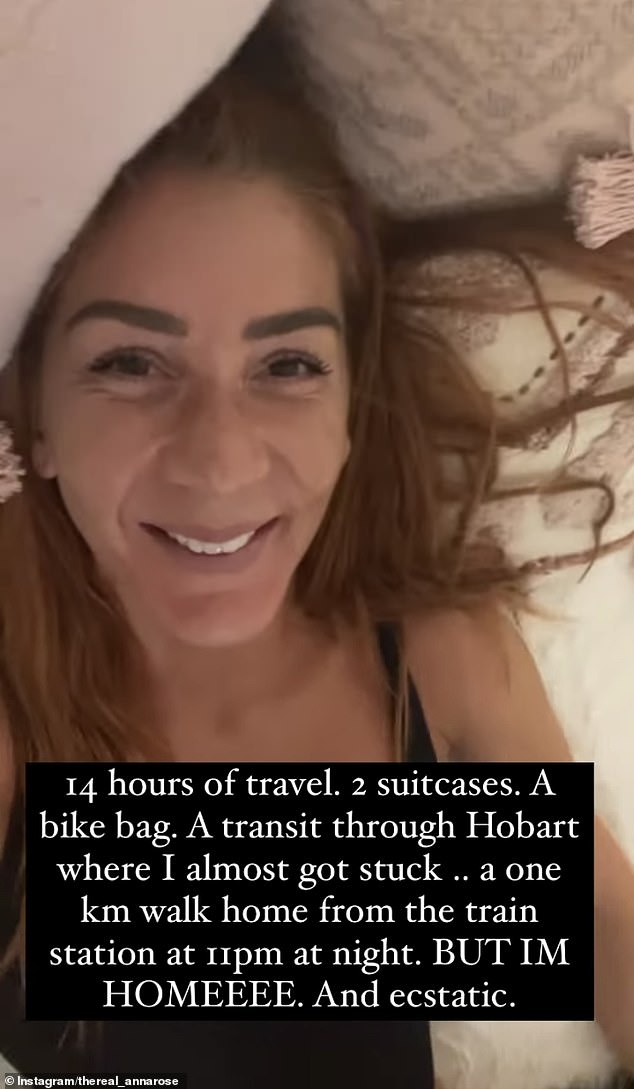 Queensland recorded a hefty 4,249 new infections and one death overnight. Pictured: Richards after arriving home to the Gold Coast

The stories prompted backlash on Twitter, with one person pointing out that it was ‘annoying/distressing for all those [she] may infect’.

Another wrote: ‘No doubt some immuno-compromised passengers on board. Throw her in jail.’

A range of others simply said: ‘What the f**k.’

While Western Australia only has a dozen known active cases of Covid-19, it is possible for asymptomatic people to pass the virus on to others. 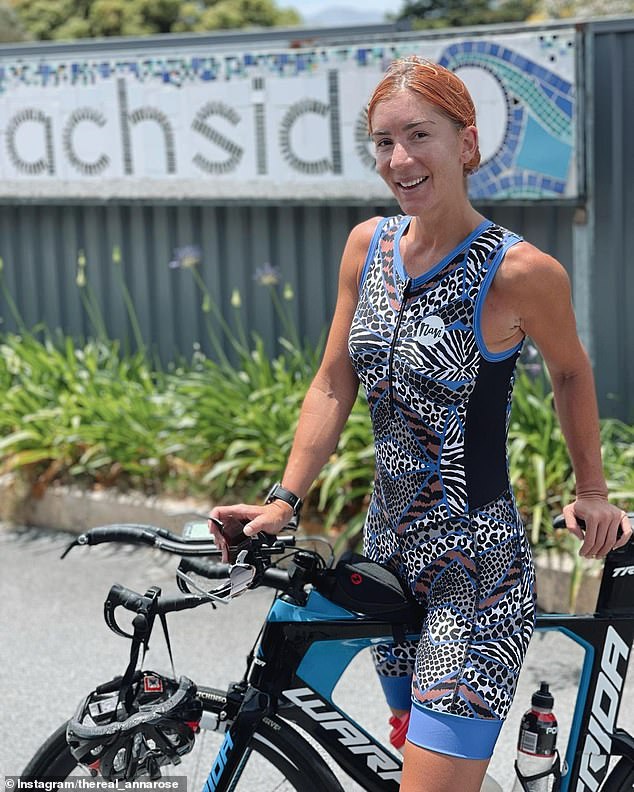 The stories prompted backlash on Twitter, with one person pointing out that it was ‘annoying/distressing for all those [she] may infect’

Queensland recorded a hefty 4,249 new infections and one death overnight on Monday, before chief health officer Dr John Gerrard warned millions of residents will become infected in a matter of weeks.

Hospitalisation rates have also increased to 147 – up from 112 – while the number of patients being treated in ICU has doubled to 10.

‘We have over 20,000 active cases [in Queensland] and only one patient on a ventilator last night,’ Dr Gerrard said.

‘All of us are going to be exposed in the next few weeks. Even if you’ve had the two doses of the vaccine, that probably isn’t enough to stop you from getting infected. That is why it is so critical to get the third vaccine.’