Despite long-standing rhetoric, older buildings are not always greener. A recent analysis found that the 1919 Federal Reserve Bank of New York, for example, is exceeding its 2024 emissions targets, while the 1920 American Stock Exchange building is now. (Photos: Beyond My Ken and RMajouji)

It is, by now, well established that the construction industry and the built environment contribute significantly to greenhouse gas emissions and energy expenditure. For example, over 70 percent of New York’s greenhouse gas emissions come from buildings. Nevertheless, despite many municipalities adopting stricter energy code requirements in recent years, historic buildings in the United States continue to receive exemptions on energy performance and environmental impact.

This status quo has gone largely unchallenged since the onset of these energy code exemptions for historic buildings in the 1970s. Preservationists have since argued that older buildings are more energy-efficient on average, but without much data to back up this claim.

Our team, led by Columbia University professor Erica Avrami, thinks it may be time to reconsider these default energy code exemptions for historic buildings. In a recent study, we attempt to set the record straight: Despite long-standing preservationist rhetoric, older buildings are not always greener. In fact, energy code exemptions have only placed historic buildings in more challenging positions today, as cities like New York begin to enforce greenhouse gas emissions to combat the climate crisis—without exemptions for historic status.

Quantifying the problem: New York City as an example

More data sources on building energy use have become available in recent years, making it possible to analyze just how “green” older buildings really are. Many cities and states have instituted energy audits and benchmarking programs, whereby owners of both non-historic and historic buildings are obligated to disclose energy performance metrics for properties exceeding a specified square footage. New York City is among the municipalities that have implemented such a policy, beginning with 2009’s Local Law 84 and since expanded through Local Law 133 in 2016.

Using this reported benchmarking data for 2018, our study found that the conclusions of a 1977 study on office buildings of various ages in New York City—which had been foundational in underpinning the claim that older buildings are greener—are, in fact, disputable. Not only did this earlier study examine a rather limited sample to draw these conclusions, their findings are based on comparing average energy consumption for various decades of construction. An average is a poor measure of energy performance because it fails to indicate the variability and range of energy consumption data, producing a misleading, single value to characterize the performance of buildings of a certain time period. The 2018 benchmarking data provided more data points than the earlier studies, creating a more robust picture of the existing building stock. This more recent dataset showed that the range for energy consumption of older office buildings has become even wider over time. Altogether, these conclusions call into question the generalization that older buildings inherently have better energy performance. 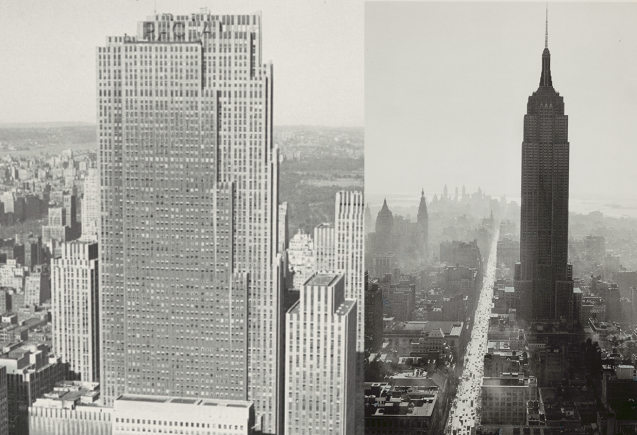 The 1930 building now known as 30 Rockefeller Plaza is exceeding its 2024 emissions targets. The 1929 Empire State building is meeting its targets. (Photos: Library of Congress)

Too late to adapt?

This more accurate understanding that not all older buildings are greener—and that, as a matter of fact, some older buildings have egregious energy consumption rates—raises an urgent question: Are historic buildings ready to face the climate crisis?

The long-standing exemption of historic buildings from energy codes suggests that the answer is somewhat daunting. Code revisions, instituted every few years, take into account previously unavailable technologies and methods to enhance energy performance, so that requirements have become generally more exacting with each iteration. Most existing buildings are held to these changes, and their owners have responded accordingly through retrofits, opting for cleaner energy options, and other measures. This sequence of regular updates makes each change relatively manageable, in smaller increments.

By contrast, historic buildings have not had to keep up with changing energy code requirements through such cumulative updates. This stasis makes it harder to envision what would happen if historic buildings were suddenly held to the same energy requirements as other buildings: They would have decades’ worth of energy savings to catch up on, incurring large costs and complicated retrofitting projects. The sheer quantity of exemptions illustrates the gravity of this challenge: our analysis showed that in the case of New York, approximately a third of the built floor area of Manhattan was exempt from energy codes based on historic status.

Recent New York City legislation to limit greenhouse gas emissions from buildings has broken the pattern of exempting historic buildings. Local Law 97, within the city’s 2019 Climate Mobilization Act, specifies emission limits that buildings above a threshold square footage must meet by 2024. Among the buildings affected are designated historic properties—spanning 3,821 tax lots and over 578 million square feet across New York City—which have, to date, been energy code-exempt. This provision will require many owners to face steep energy efficiency “learning curves” if these historic buildings are to meet the Local Law 97 limits. The benchmarking data again provides a glimpse of the issues ahead: Approximately a quarter of the designated historic properties subject to Local Law 97 exceed the emission limits, based on values reported for 2018. 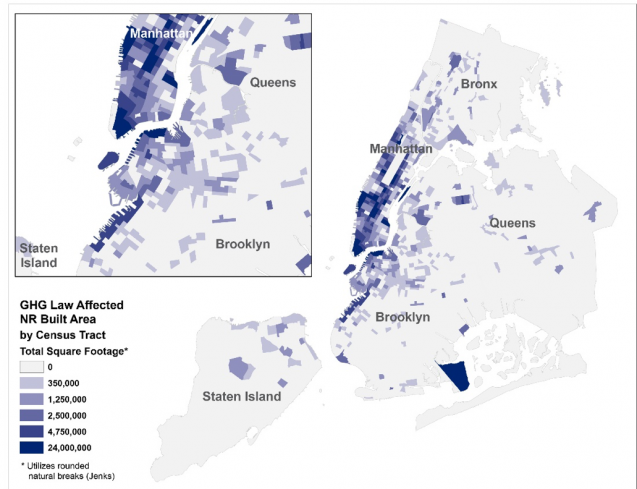 While our study focused on New York City as a case study, greening historic buildings that have long been exempt from energy codes are a nationwide issue.

To assess just how pervasive such exemptions were, we also examined building codes in use throughout the United States. A review of state energy codes found that in all 50 states and the District of Columbia, buildings listed on or eligible for the National Register of Historic Places qualify as “historic,” rendering them exempt. Some state-level codes also grant exemptions to buildings designated on state and local historic registers, further expanding the quantity of buildings able to skirt energy code provisions.

Given the ubiquity of exemptions, there is no denying the impending challenges to retroactively greening historic buildings. It is vital, now more than ever, to reevaluate the relationship of the historic built environment and the climate crisis—and these challenges should not be faced by preservationists alone, but with climate scientists and others vested in battling the climate crisis, allied through close partnerships and sustained, meaningful conversations.

Anna Gasha is a doctoral student in historic preservation. Jennifer Most and Shreya Ghoshal are also coauthors on the study.

2023 Cadillac LYRIQ sells out within 4 hours