By Eliza Mcphee and Charlie Moore For Daily Mail Australia

One hundred undecided voters will fire off questions to both leaders in Sky News and The Courier Mail’s People’s Forum on Wednesday night.

The debate kicked off with a question on what each leader would do to help Aussies get into the housing market.

The Labor leader took the opportunity to bring up a remark made earlier by Mr Morrison who told those struggling to afford rent to consider buying a house.

‘I know that it’s so tough now. Some of the measures the government have done are terrific but we’re missing out on bits too. We’re not doing anything on social ownership, which would increase supply,’ Mr Albanese said.

‘We also need to address the rental crisis. Rents are going through the roofs. Scott said if you’re having difficulties with rent, buy a house.

‘The truth is, it’s much more difficult than that, and we need to address each of the issues. How do we get people into home ownership? How do we address affordable housing?’

The pair then became caught in a heated debate over turning back boats, leaving Mr Albanese stumped.

Mr Albanese said he supported turnbacks before Mr Morrison noted when he was Deputy Prime Minister in 2013 that wasn’t the case. 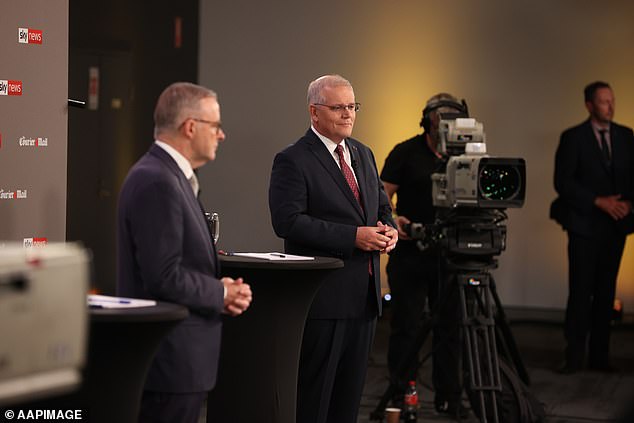 Mr Morrison responded cooly: ‘I’m just looking for the accuracy and the truth.’

Mr Morrison said he hoped the debate in Brisbane would be ‘civil’.

‘I’ve said right from the outset of this campaign this election is about a choice (and) tonight, I’m talking about our plans, what we’ve been doing,’ he told reporters in Adelaide earlier on Wednesday.

‘I’m optimistic about the future for Australia … so tonight, I look forward to that discussion. I hope it will be a civil discussion.’

‘After everything we’ve been through over the last few years, I’m incredibly optimistic about Australia’s future,’ Mr Morrison said.

‘Our economy today is one of the strongest in the first world. This election is a choice. It’s a choice about how we keep our economy strong. A stronger future, and an uncertain one.’ 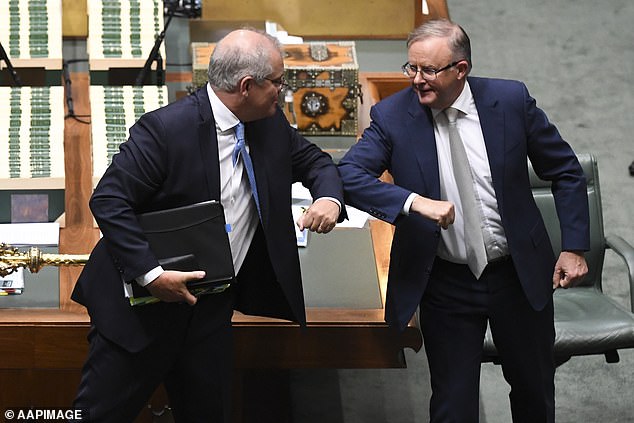 Meanwhile the Opposition leader said he planned to create a better future for Australians if his government was elected.

‘You all know the cost of everything is going up, expect your wages.

‘So we need a plan. We need to make sure we have a strong economy with secure work.

‘The government’s been in office for a decade. The truth is, they haven’t learnt from their mistakes. We must do better.’

The debate will give Mr Albanese a chance to prove himself after a disastrous first week in which he made headlines for wrongly guessing the unemployment rate and later walking away from journalists’ questions after saying he wouldn’t.

With Labor’s primary vote slumping to 36 per cent in the latest Newspoll, another big stuff-up could be catastrophic.

Mr Albanese has been careful so far not to attack Mr Morrison. Instead, he’s been keen to project himself as a positive leader with a plan to improve living standards.

But tonight he will have the chance to criticise the PM’s shortcomings over bushfires, Covid and broken promises.