Aussie genius who CREATED the world’s beloved Pink Lady apples dies age 95: Here’s how he turned them into a global sensation

The Australian farmer best known as the brains behind the taste of Pink Lady apples has died age 95.

John Cripps died in Western Australia on Tuesday, with his daughter, Helen, paying tribute on ABC Radio this week.

Helen said it took Mr Cripps 25 years of research to develop the Pink Lady brand’s apple genetics to the point it’s at today.

‘We are so proud that he’s left a legacy. He tasted so many apples he used to get stomach complaints, because he used to have to do the tastings,’ Ms Cripps said.

‘He was looking for a particular taste — he was looking for the red colour, the sweetness, the crispness… and that they had good storage so they could survive in cold store for a long time.’

Mr Cripps’ daughter said he worked long and hard to ensure his apples not only had a great taste but could be eaten all year round.

She said her father’s love for horticulture started when he was growing up in England during World War II and would plant things in the backyard.

‘There was an apple tree in the backyard and it was hard and it wasn’t very sweet and he thought maybe one day I can do better,’ Ms Cripps said.

He then worked in the agriculture department in Western Australia and started working on breeding varieties of apples.

‘As children growing up we had a second fridge, and dad used to bring home the apples that he thought were potential for a new apple breed and my sister and I were given strict instructions to eat them but spit out the pips so he could take them and reseed them,’ Ms Cripps said. 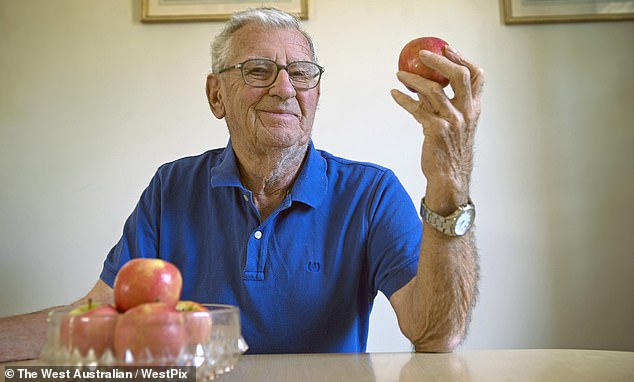 ‘So we were the reviewers of the Pink Lady.’

She said her father, an avid reader, named his apples after a cocktail dubbed the Pink Lady in the 1951 book The Cruel Sea.

Ms Cripps described her father as a quiet man, and a keen gardener who loved to walk and hike.

‘He’s a great example of the quiet achiever. Dad was an innovator,’ she said.

‘I want people to be proud when they pick up a Pink Lady apple that it comes from Western Australia.’

His apples first hit the market in 1991 and have gone on to become household items in millions of Australian’s homes.

Pink Lady apples once accounted for 30 per cent of Australia’s production of the fruit.

Mr Cripps was named as an Officer in the Order of Australia in 2015 for his contribution to agriculture, and was inducted into the Hall of Fame of the Royal Agricultural Society of Western Australia in 2010.