European energy giants are pressing ahead with plans to keep buying Russian gas as the European Union’s guidelines appeared to allow them to do so without breaching sanctions.

Even as conflicting messages continued to emerge from Brussels over the legality of complying with Moscow’s demands to pay for gas in rubles, Italy’s Eni SpA said it was opening a ruble account to keep the gas flowing.

It’s the clearest sign yet that the biggest European importers of Russian gas are counting on business as usual. Germany’s Uniper SE and Austria’s OMV AG also expect to find a way to keep buying.

Moscow’s demand on March 31 that gas payments should now be made in rubles threw markets and policy makers into disarray and companies have been scrabbling ever since for a way to keep the crucial energy flowing without breaching sanctions aimed at weakening Russia in its war in Ukraine. The move has divided the bloc, with Poland and Bulgaria quick to reject Moscow’s demands — and have their gas cut off as punishment. 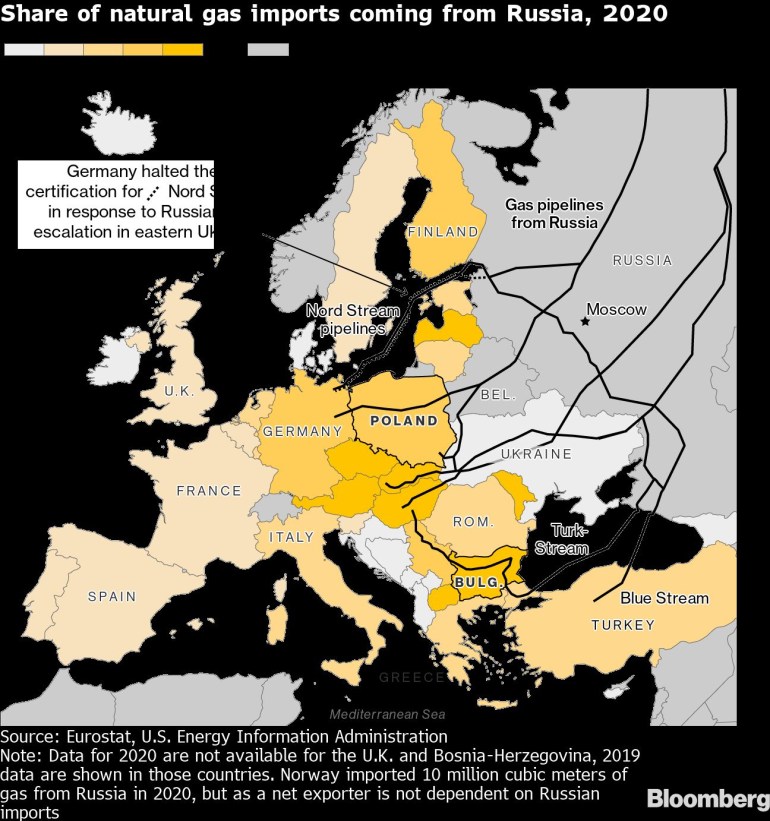 The bloc has issued two sets of guidance on the matter so far, both of which allow room for interpretation. There’s still nothing in writing from the Commission that explicitly stops companies from paying Gazprom PJSC in a way that the Russian company has indicated would be satisfactory.

Gas prices fell on Monday as the latest Brussels missive to member states stopped short of banning companies from opening bank accounts in rubles. Then on Tuesday, European Commission spokesman Eric Mamer said that opening an account in rubles would go beyond the recommendations and constitute a breach of sanctions. Gas prices rose, before easing back again after Eni said it was pressing ahead.

“Anything that goes beyond opening an account in the currency of the contract with Gazprombank and making a payment to that account and then issuing a statement saying that with that you consider you have finalized the payment contravenes the sanctions,” Mamer said.

The issue has divided the bloc, with Poland outraged at the EU’s reluctance to set out clear red lines. In the opposite camp, Prime Minister Mario Draghi went as far as to say that it was a gray area when it came to sanctions. And enforcing sanctions is a matter for member states, rather than the bloc.