A woman has revealed how she allowed both her husband and her doctor to believe she had a miscarriage at six weeks, after going through a secret abortion.

The woman took to Reddit recently to speak about the termination which happened in March, 2020, her feelings of guilt and why she would ‘do it all again’.

She explained that though married and financially stable enough to provide for a child she had always been ‘on the fence’ about it.

A woman has revealed how she allowed both her husband and her doctor to believe she had a miscarriage at six weeks, after going through a secret abortion – stock image

At the time she was also unsure if she wanted to stay in her marriage after catching her husband having an affair just months earlier.

‘My mental health was in the drain, and I was using alcohol to escape,’ she said.

Her mental health continued to deteriorate once she found out she was pregnant, it got to the point where she began to feel suicidal.

‘I was immediately devastated. I felt like any hope I had left had been taken from me. I felt like I was now trapped in a marriage that made me feel so small,’ she said.

And matters only got more complicated when she told her husband she was pregnant.

‘He was ecstatic, he really wanted this baby,’ she said.

The woman said she decided to open up to her husband about her mental health and how it was tied to her pregnancy and his infidelity.

‘My husband had been doing everything right for us to reconcile but the pain was so deep I didn’t know if I wanted to live with that forever,’ she said.

‘We discussed abortion. He told me if I did it, he wouldn’t ever want to try to have children again in the future,’ she said.

So she decided to make an appointment with family planning – hoping that seeing their baby would make her want to keep it.

But when ‘the tiny jelly bean’ appeared on screen she ‘felt nothing’ and knew she would go through with a secret termination.

‘I left with my abortion scheduled for the following week, during a time my husband was at work,’ she said.

She was only six weeks along at this point, so the abortion was ‘as easy as taking two pills’, one after a pelvic exam at the clinic and another at home hours later. 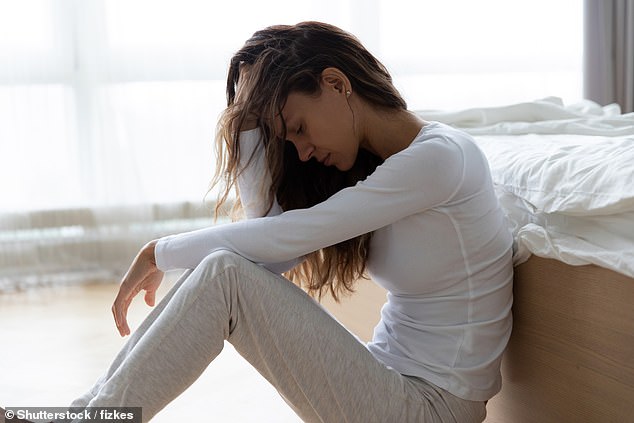 ‘When the bleeding started, I pretended it was a miscarriage,’ she said.

‘I followed up with my regular OB/gyn and she diagnosed me with a missed miscarriage, not knowing I had had a pill induced abortion. My husband believes I miscarried,’ she said.

But it is a secret she must now take to her grave, she explained.

‘My husband was sad when it happened but later told me he was also relieved.’

‘I feel so guilty, but regret absolutely nothing. I’m so glad I did not have that baby and I was shocked at how simple and safe the process was.’

The woman, who lives in Texas, went through the process in March, 2020.

But is sharing her story now to get it off her chest and to advocate for abortion to remain legal.

‘If Roe v Wade is overturned, abortion would carry a 2-5 year prison sentence in my state. If I were in that position now, I would be stuck in an unhappy loveless marriage and forced to birth a child I would most likely resent,’ she said.

‘With everything going on now, I just needed to share my story. All abortions are valid and life-saving, even if the mother isn’t physically in a life or death situation.

‘My pregnancy made me suicidal and my abortion gave me hope and a reason to keep going.

‘I’m lucky I had the choice and I am truly the only one carrying the burden of my choice,’ she said.

And people appeared to be very supportive of her choice.

‘As a European, all I can say is this to US women: please protest. Keep protesting. Make your voices heard,’ one woman said.

‘I stand with you, and I would protest like crazy as well if anything like that were ever to happen in my own country,’ said another.

‘This is so important! In Argentina abortion was banned until 2021. The way we took the street for years was the cause an abortion law was passed. Keep protesting,’ said another.

Others expressed anger at the woman’s situation.

‘I’m mad that your husband gave you an ultimatum over something he didn’t actually want,’ one woman said.

‘The audacity of the man telling her if she doesn’t have a child now (right after traumatising her) then he won’t let her ever have one,’ said another.

Others suggested she seek marriage counseling and decide if she wants to stay in her marriage.

‘If you are feeling like that because you don’t want to be trapped in a marriage with him then you should walk away immediately,’ one woman said.

For confidential support call the Lifeline 24-hour crisis support in Australia on: 13 11 14