American swimmer Justin Ress went through a whirlwind of emotions after touching the wall first in the 50m backstroke final at the World Championships in Budapest – only to be disqualified moments later before having his win reinstated.

Ress stormed into the final as hot favourite and finished 0.02 of a second ahead of fellow American Hunter Armstrong.

American backstroker Justin Ress touches the wall first with a time of 24.12s – only to then be disqualified for finishing the race while underwater

After a video review, Ress was disqualified when footage showed he finished the race entirely submerged, which is illegal in backstroke events.

Armstrong was handed the gold, while 17-year-old Ksawery Masiuk from Poland was upgraded from bronze to silver.

He got his wish as Ress’s win was restored when the championship jury upheld the appeal.

In what was to be the final medal ceremony of the FINA World Championships, Ress received his gold while he stood alone on the podium in truly bizarre scenes.

‘I felt every single human emotion there is in a 30 minute span, so that’s fun,’ the 24-year-old from North Carolina tweeted on Sunday morning. 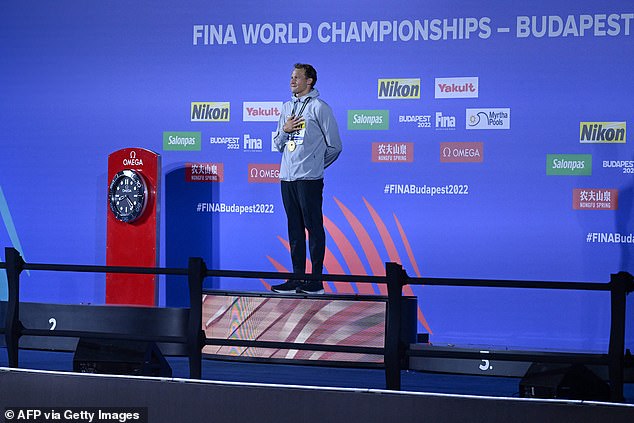 Ress takes to the podium alone, shuffling fellow American Hunter Armstrong to second place – it was the final medal ceremony of the 2022 FINA World Championships in Budapest

Armstrong passed on the gold to Ress before his one-of-a-kind ceremony.

Italian world record holder for the 100m backstroke, Thomas Ceccon, finished half a second behind the leader and placed fourth.

She won six medals at the championships, three of them gold, as the Aussie team finished with a total of 17 medals despite missing several of their biggest names. 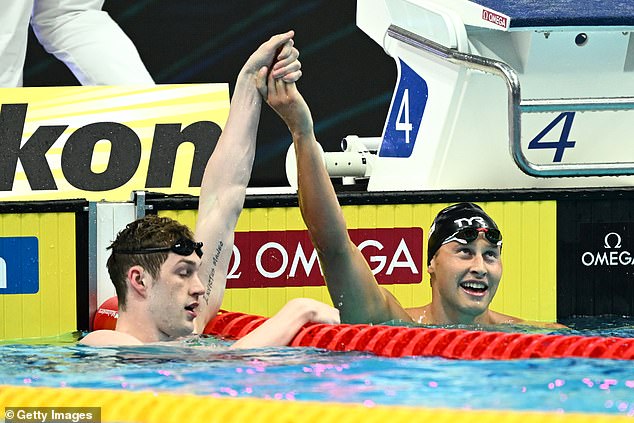 Ress was a three-time NCAA champion with North Carolina University and in 2017 broke the 50m backstroke record with a time of 24.41, beating two past Olympians in the race.

America finished the championships with 45 medals, 17 of those gold, a record-breaking swim meet for the USA.