The Queen looked ecstatic as she made an unexpected return to work today after she travelled to Scotland for her first public duties since the Platinum Jubilee.

Her Majesty is in Edinburgh with members of her family for their traditional week of events north of the border including meeting with Nicola Sturgeon.

The 96-year-old, who has cut back on public engagements due to mobility issues, was all smiles as she took part in the historic Ceremony of the Keys – the traditional opener to Holyrood week for the Royal Family.

The Queen, who has a deep love for Scotland, has been joined by her youngest son, Edward, and his wife, Sophie, known as the Earl and Countess of Forfar while they are in Scotland, for the event, which is taking place at the Palace of Holyroodhouse.

The ceremony sees the monarch handed the keys of the city and welcomed to her ‘ancient and hereditary kingdom of Scotland’. A Guard of Honour was provided by the Balaklava Company, The Argyll and Sutherland Highlanders.

Her Majesty hopes to carry a out several engagements this week – and will meet Scottish First Minister Nicola Sturgeon during her stay.

Her children, including Prince Charles, will be supporting her all week – but Prince Andrew will stay away because of controversy about his settlement with Virginia Roberts Giuffre – an abuse victim of his friend Jeffrey Epstein. 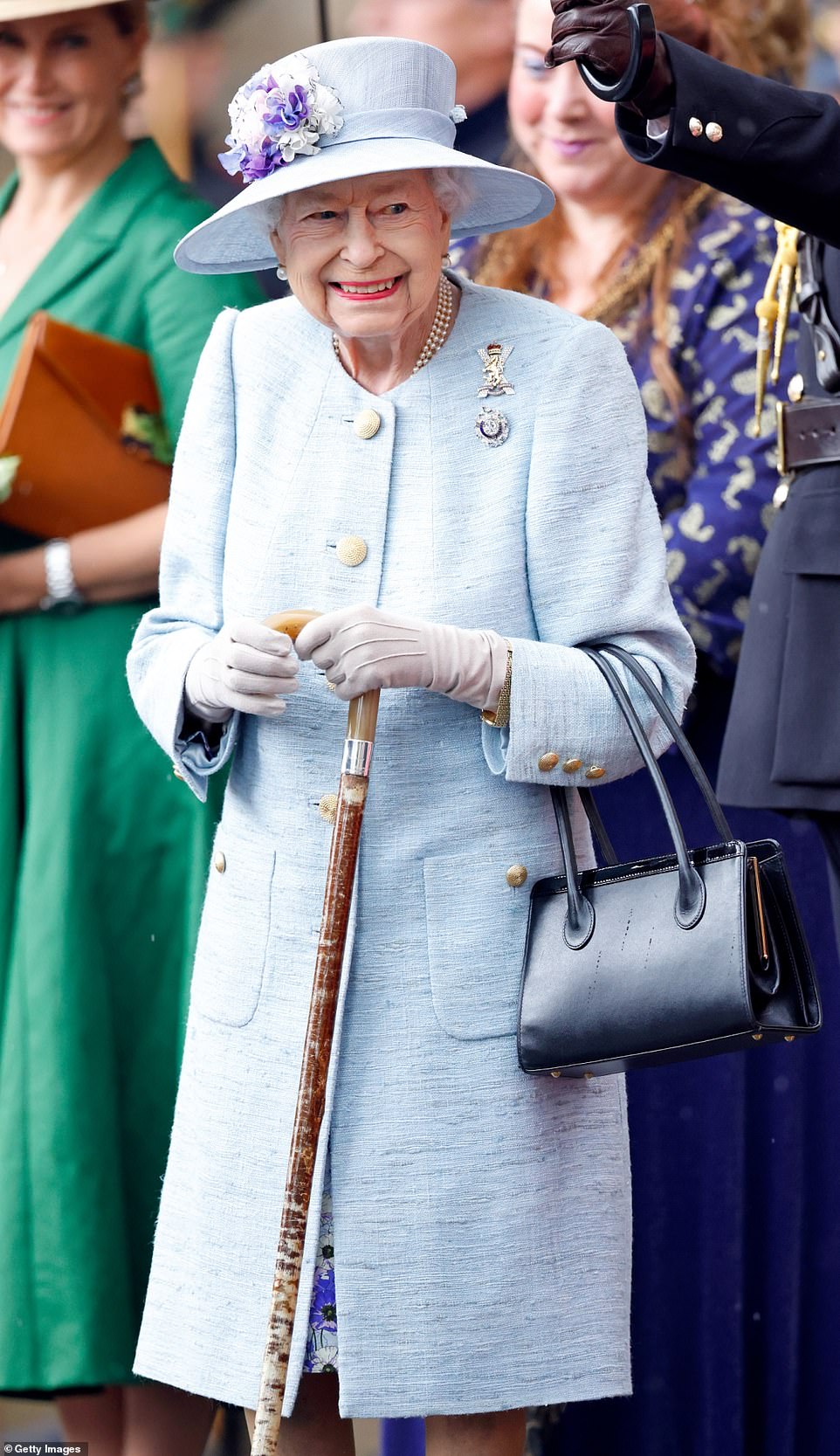 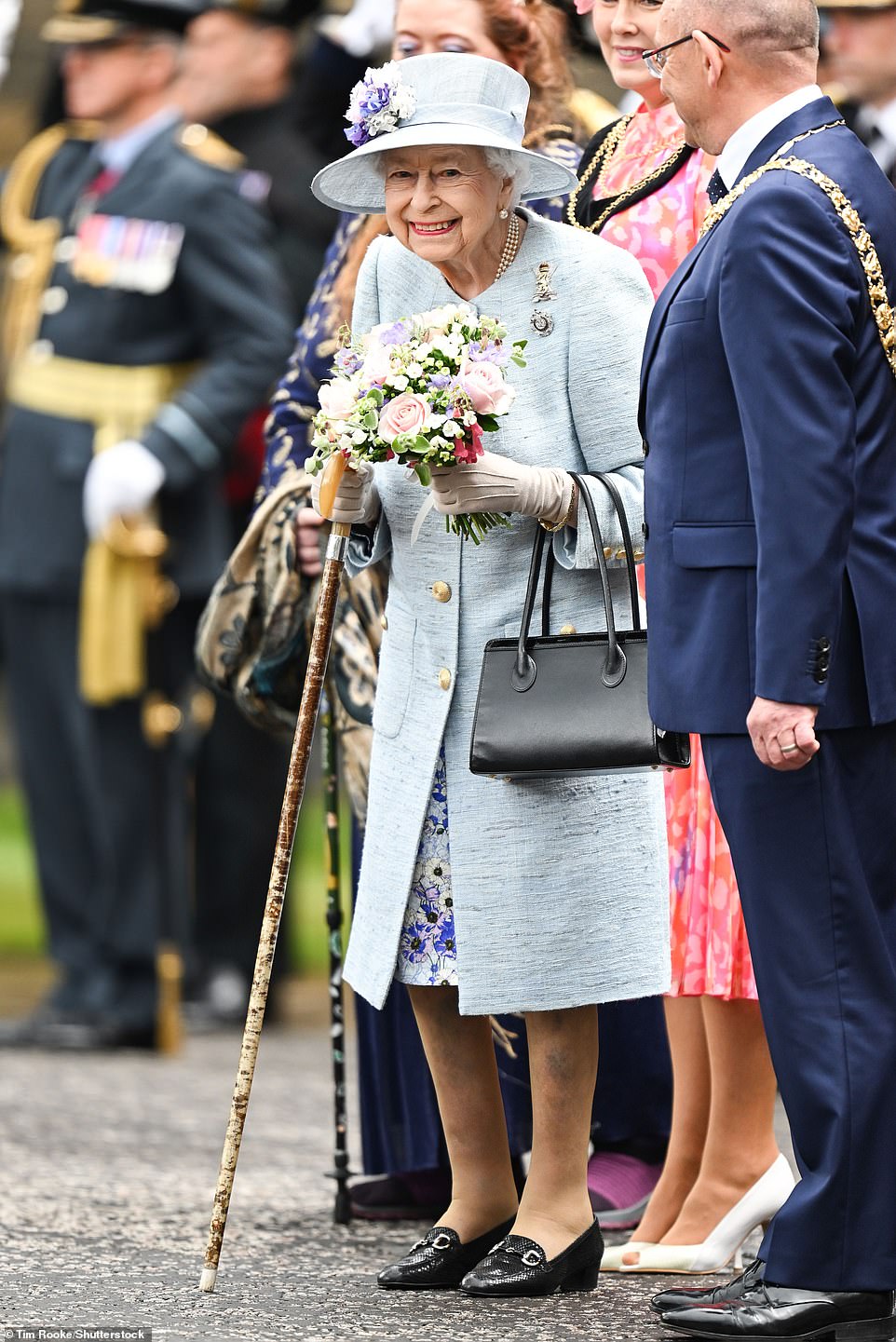 The Queen is being supported in Scotland by the Wessexes (Sophie and Edward to her left). Prince Charles will be in Scotland later this week 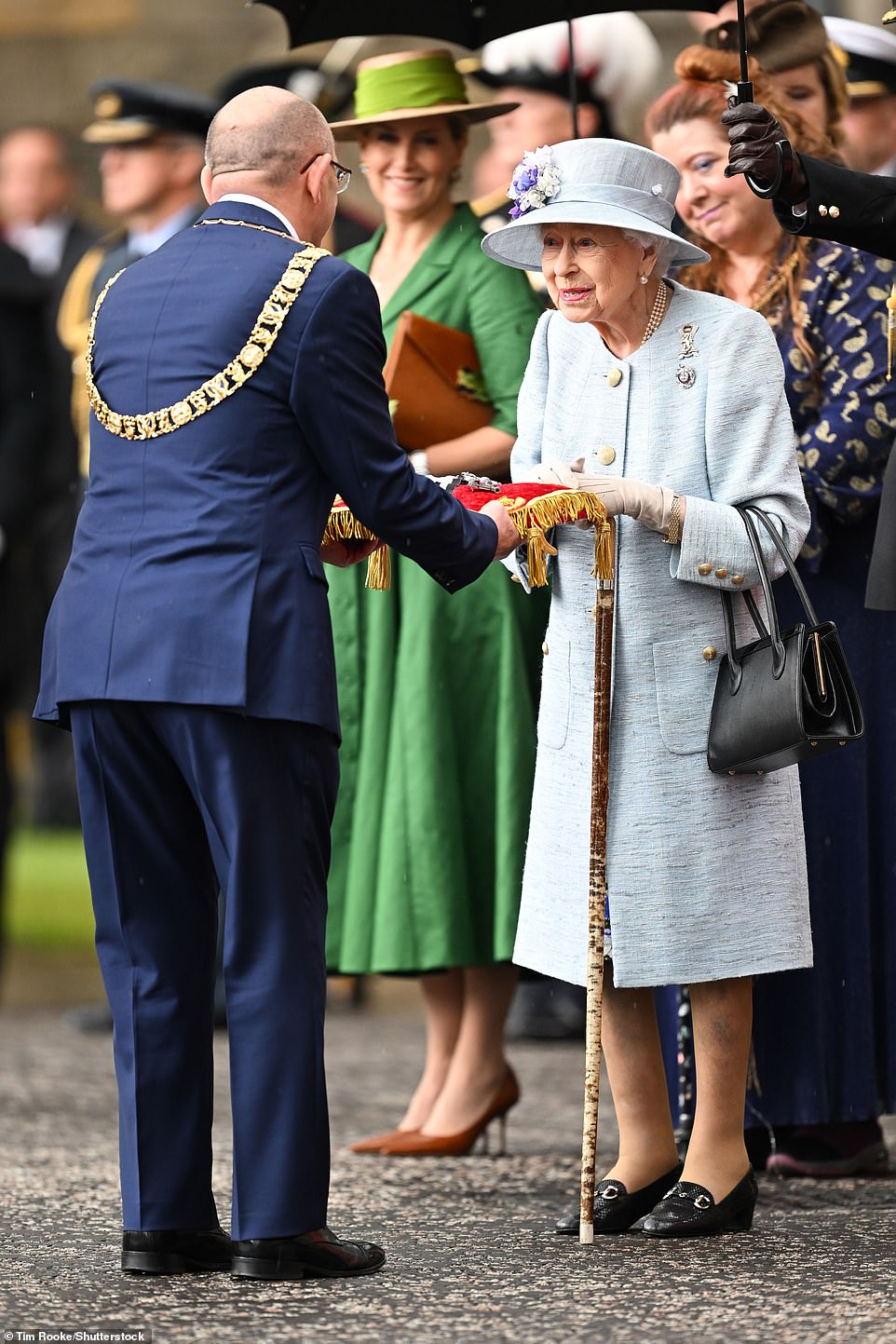 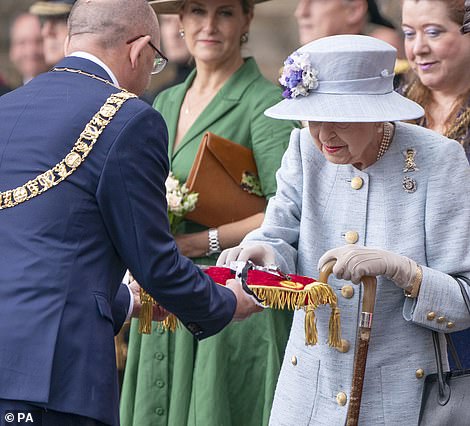 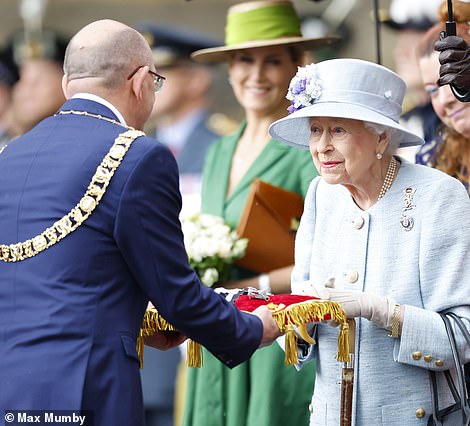 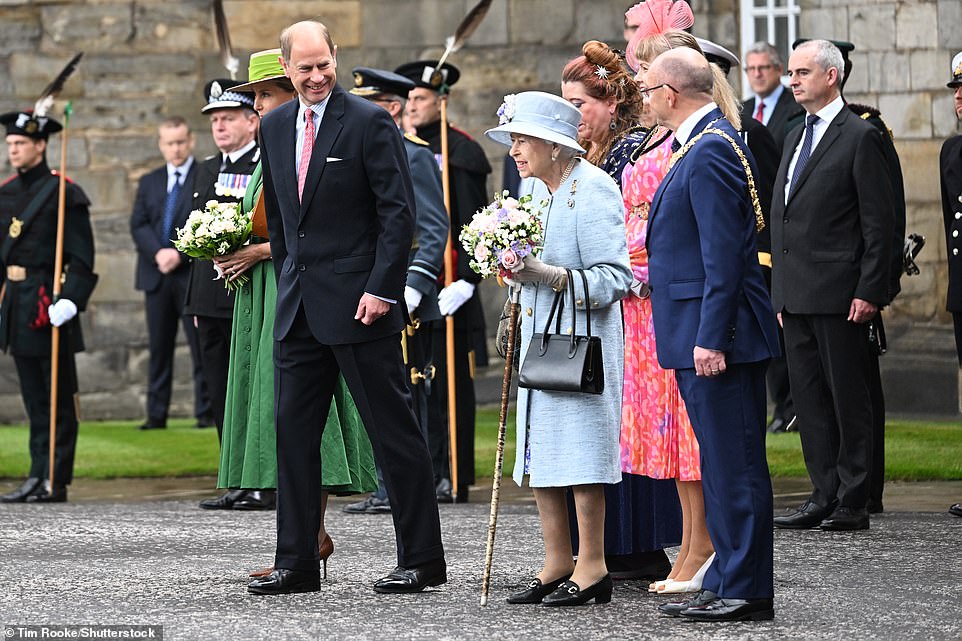 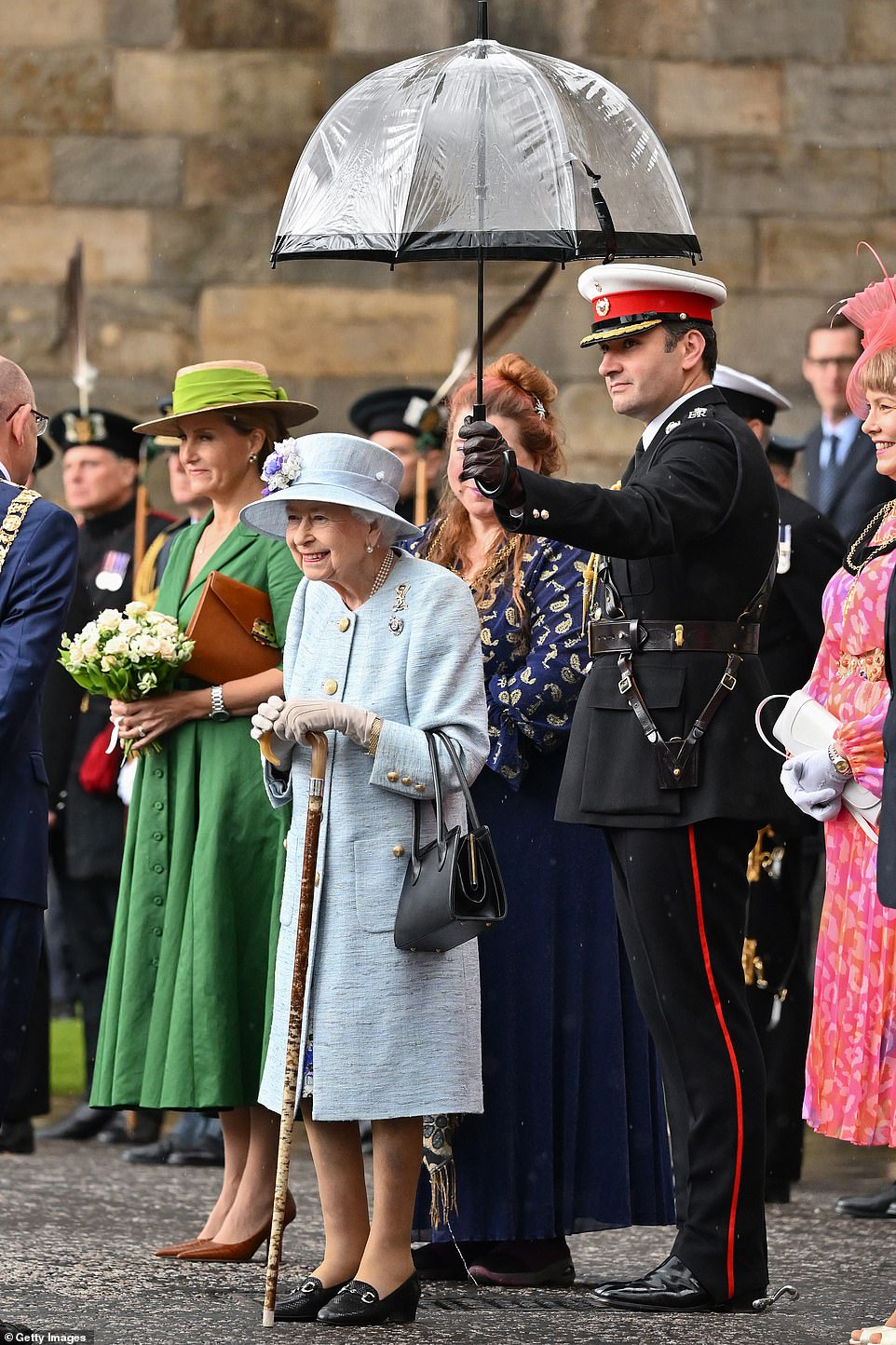 What is the Ceremony of the Keys?  And what will the Queen do in Scotland during Holyrood week?

As part of the Ceremony of the Keys, the Queen is welcomed into the city of Edinburgh, Her Majesty’s ‘ancient and hereditary kingdom of Scotland’, by the Lord Provost, who offers her the keys of the city.

The monarch then ceremoniously returns the keys, entrusting them to the elected officials of the city.

She also inspects a guard of honour, provided by the Royal Regiment of Scotland.

There is an Investiture during the week, held in the Great Gallery at the Palace of Holyroodhouse, which is located at the end of the Royal Mile in the centre of Edinburgh.

The Investiture recognises Scottish residents who have made a significant contribution to their society.

A Garden Party is held, where The Queen welcomes around 8,000 people from all walks of Scottish life to spend a relaxed afternoon with her in the beautiful grounds of the Palace.

Apart from these regular engagements, The Queen also undertakes a number of regional Scottish engagements which vary from year to year.

Dressed in a powder blue silk wool coat and dress by Stewart Parvin, paired with a hat by Rachel Trevor-Morgan, the Queen was symbolically offered the keys to the city by Edinburgh Lord Provost Robert Aldridge.

The tradition dictates that the monarch returns them, entrusting their safekeeping to the city’s elected officials.

The Queen was joined by her youngest son, Edward, and his wife, Sophie, known as the Earl and Countess of Forfar while they are in Scotland.

The Guard of Honour was provided by the Balaklava Company, the Argyll and Sutherland Highlanders, 5th Battalion The Royal Regiment of Scotland, which was inspected by Edward on the forecourt of the palace during the ceremony.

The trip comes after the recent Platinum Jubilee celebrations for the Queen, in which she pledged to continue to serve the country “to the best of my ability supported by my family”.

The trip comes after the recent Platinum Jubilee celebrations for the Queen, in which she pledged to continue to do her job ‘to the best of my ability supported by my family’.

Charles, known as the Earl of Rothesay in Scotland and the Princess Royal will all take part in a series of public engagements in Scotland over the coming days.

However, Andrew, known as the Earl of Inverness in Scotland, no longer carries out public duties and will not be involved.

It emerged over the weekend that The Queen has defied doctors by getting back in the saddle on her beloved horses – just days after she was seen without the walking stick she has relied on recently.

Nine months after she was advised to stop riding, the 96-year-old monarch has reportedly been on horseback in Windsor. 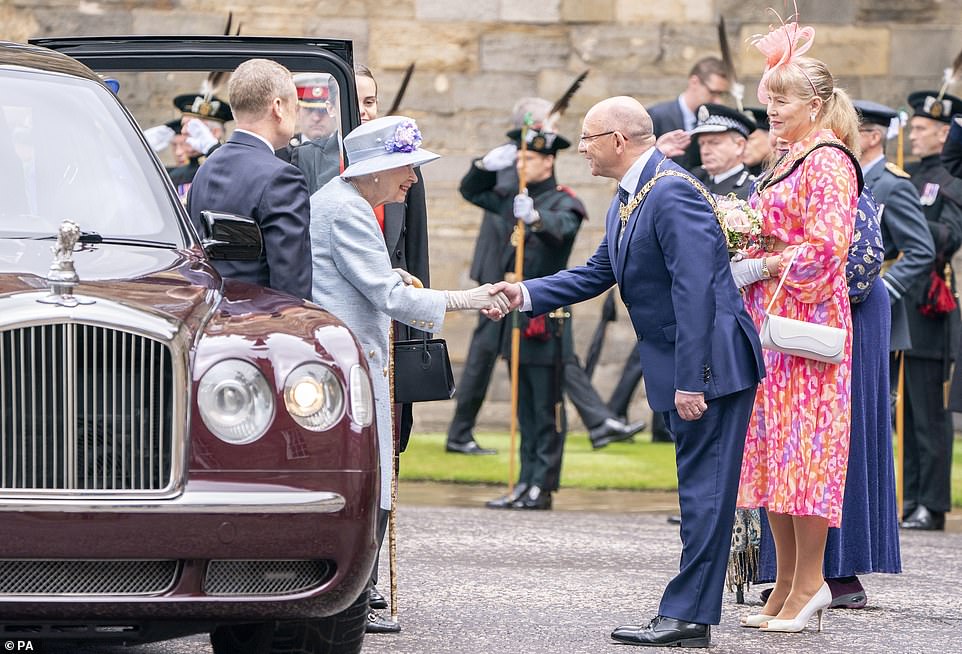 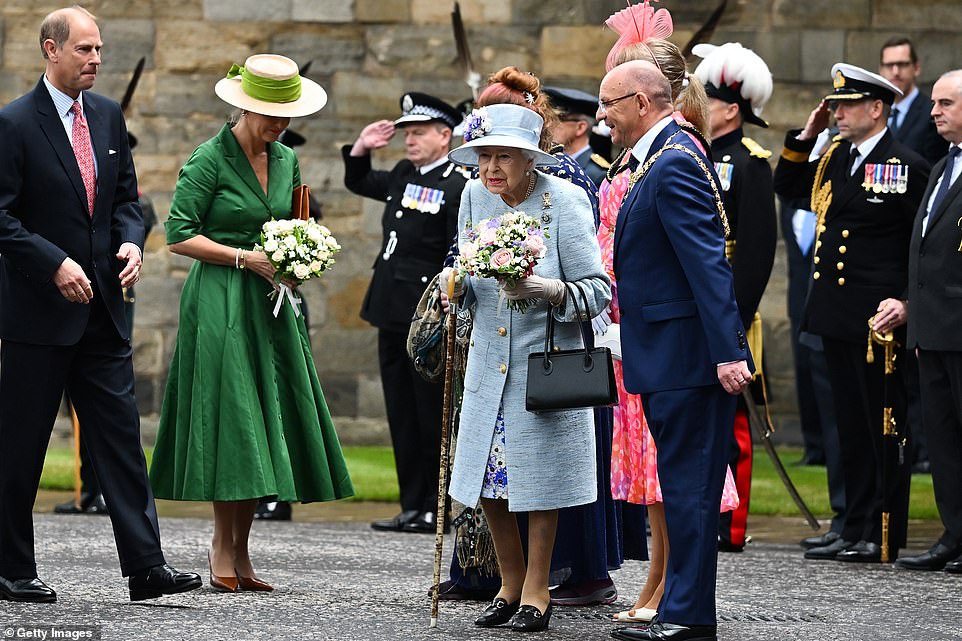 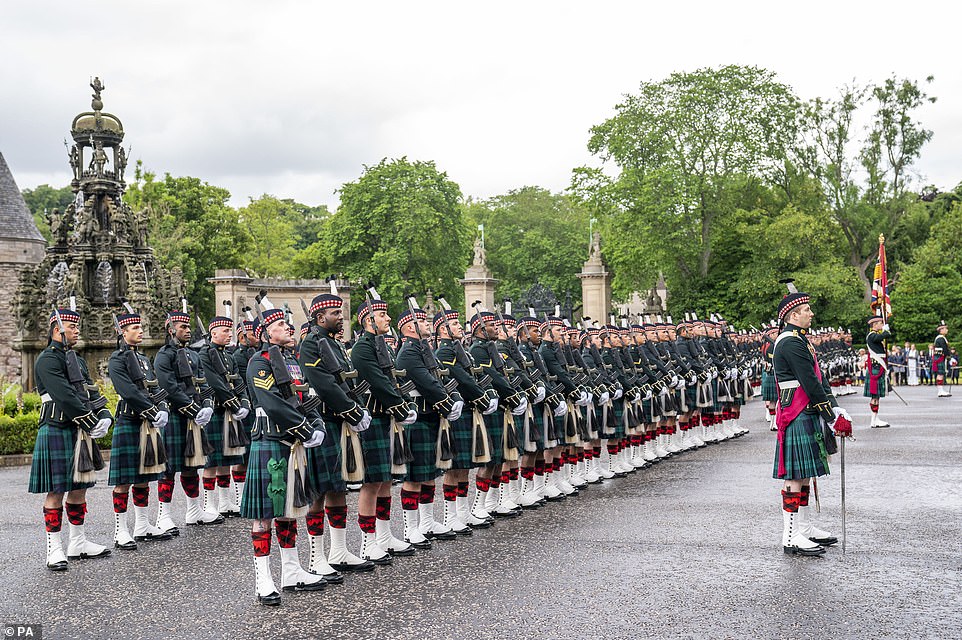 Royal Regiment of Scotland during the Ceremony of the Keys on the forecourt of the Palace of Holyroodhouse in Edinburgh.

Unspecified ‘mobility problems’ kept her from attending some Platinum Jubilee events this month, and she was often seen using a stick during engagements.

She was even using a golf buggy to ‘walk’ her corgis. But after meeting Archbishop of Canterbury Justin Welby at Windsor Castle on Tuesday without the aid of a stick, she appears to have made further progress.

A source told The Sun she had missed her riding for nine months, adding: ‘The Queen has enjoyed being on her horse again. Riding again is a wonderful sign after those worries about her health. To do so at 96 is pretty remarkable.’

The Queen often used to take part in Trooping the Colour on horseback, but in more recent years the role had been taken over by members of her family.

She has been a committed horsewoman ever since she was given a pony at three in 1929, and has been a devoted racehorse owner and breeder all her adult life.