Now that Ricky Martin’s nephew has dropped his incest and abuse case against his uncle, the pop star is free to speak out, saying that while they were ‘painful and devastating’ he hopes 21-year-old Dennis Yadiel Sanchez can get ‘help so he can start a new life filled with love and truth and joy.’

Sanchez had filed a temporary restraining order against Martin on July 1, alleging he had a sexual relationship with the singer, who became abusive and stalked him after the relationship ended.

Martin, 50, flatly denied the allegations and painted his nephew as a troubled young man with serious mental health issues.

Martin appeared in court via Zoom conference but didn’t speak.

Following the ruling, a video was obtained by TMZ with the singer claiming he was forced to keep quiet in accordance with Puerto Rico law.

‘I’m in front of the cameras today because I really need to talk in order for me to start my healing process,’ Martin said. ‘For two weeks, I was not allowed to defend myself because I was following a procedure where the law – the law – obligated me not to talk until I was in front of the judge and got this claims were proven to be false.’

‘But I’m going to tell you the truth. It has been so painful. It has been devastating for me, for my family, for my friends. I don’t wish this upon anybody.’

Martin continued, ‘To the person that was claiming this nonsense, I wish him the best – and I wish he finds the help so he can start a new life filled with love and truth and joy – and he doesn’t hurt any body else.’

‘Thank you to all my friends. Thank you to all the fans who always believed in me. You have no idea the strength that you gave me with every comment you wrote on social media. I wish you love and light – and here we come with the same strength and passion.’

Martin concluded with a peace sign, ‘God bless you all.’

Ricky Martin has won a case against his 21-year-old nephew who had been accusing him of incest and abuse. The singer spoke out for the first time about the allegations following the court ruling

Earlier he posted an Instagram post in response to the court ruling with the caption: ‘Truth prevails.’

‘This was never anything more than a troubled individual making false allegations with absolutely nothing to substantiate them,’ his legal team said. ‘We are glad that our client saw justice done and can now move forward with his life and career.’

‘Just as we had anticipated, the temporary protection order was not extended by the court,’ Martin’s legal team continued. ‘The accuser confirmed to the court that his decision to dismiss the matter was his alone, without any outside influence or pressure.’ 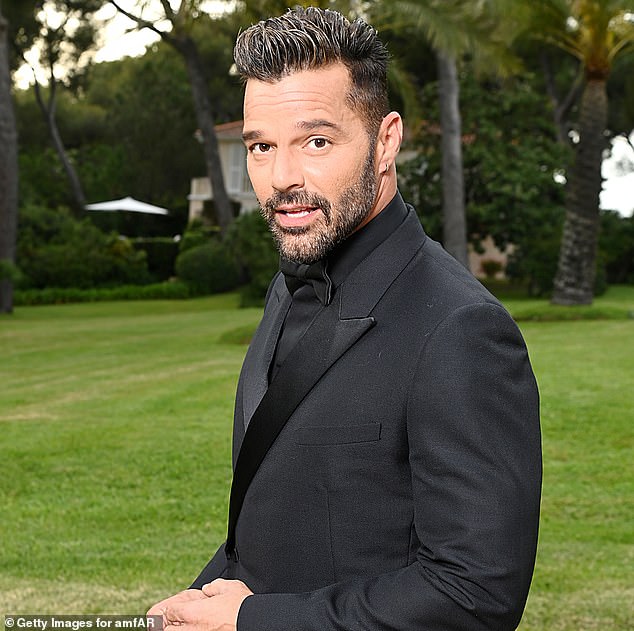 The singer also posted on Instagram posts about the case with the caption ‘truth prevails.’ In the post he explained he expected the judge to rule in his favor 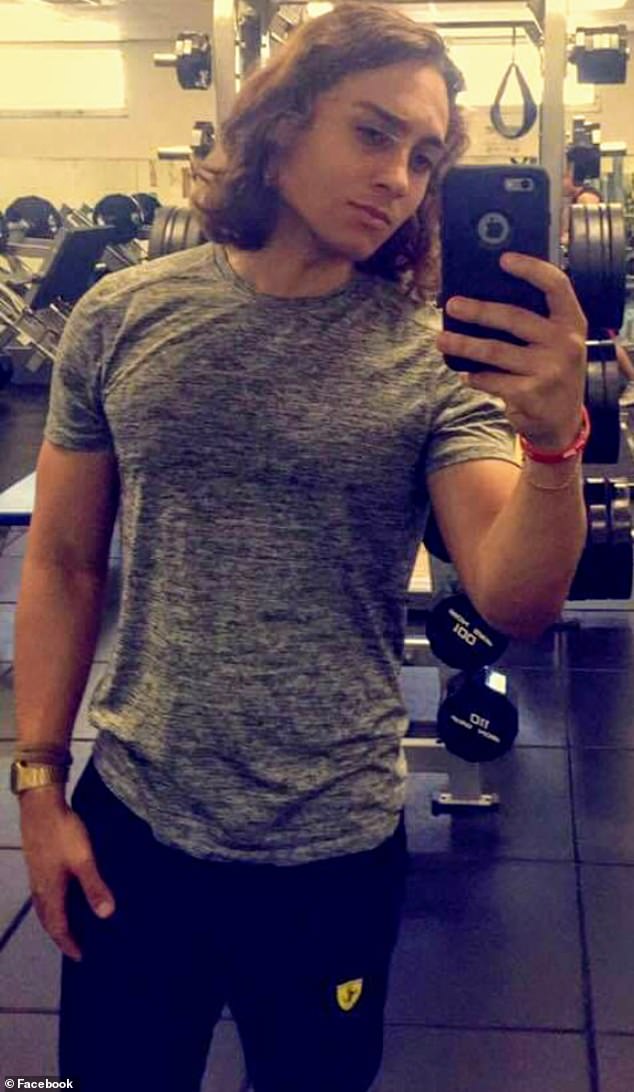 Martin, 50, had the claims against him withdrawn by Dennis Yadiel Sanchez (pictured), his nephew who had originally said the singer and actor was in a sexual relationship with him for seven months

Sanchez, the son of the pop singer’s half-sister, Vanessa Martin, had reportedly filed a temporary restraining order against Martin earlier this month to limit the contact with the singer.

According to the order – which was reviewed by El Vocero, a Puerto Rican newspaper – Sanchez claimed he and Martin broke up two months ago after dating for seven months.

Sanchez alleged Martin didn’t accept the separation and has been seen loitering near his house on at least three occasions, according to the order reviewed by El Vocero, a Puerto Rican newspaper.

He also alleged Martin had been ‘consuming large amounts of alcohol and drugs.’

The singer’s attorneys denied the allegations and were preparing their defense against Sanchez.

The singers brother, Eric Martin, claimed in a Facebook Live video that his nephew ‘has a mental problem.’

The Latin singer’s older brother said the 21-year-old, who is now estranged from the family, had hurt other relatives.

He added that the family had been struggling to cope with Sanchez’s deteriorating mental health issues but that he was ‘tired of being quiet’ about them, though he said that he and his family still loved their troubled nephew. 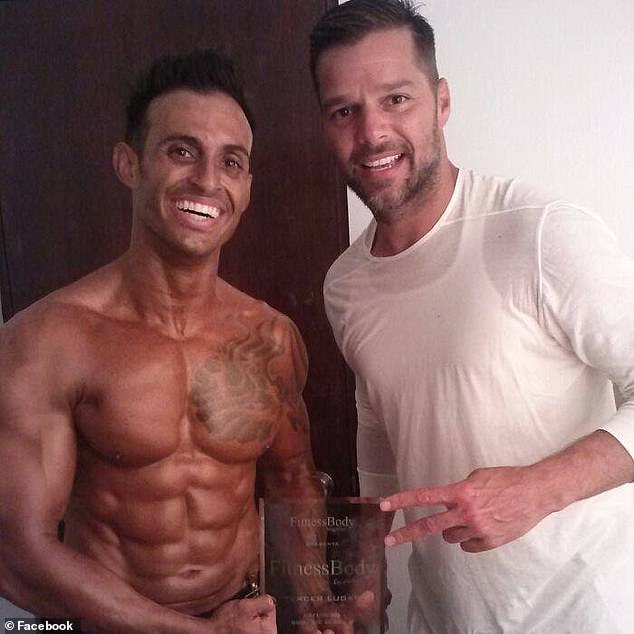 Eric Martin, the singer’s brother, identified his nephew, Dennis Yadiel Sanchez, as struggling with mental health issues. Eric and Ricky are pictured together in a photo posted to Facebook in 2014

Eric’s testimony comes after new claims that Sanchez has a criminal record and once threatened to kill a female co-worker.

Fox3Now reports that Sanchez’s colleague Claudia Ramrez Martell even took out a restraining order against him after he became ‘obsessed’ with her, repeatedly turning up outside their workplace saying he planned to murder her.

If the alleged romance between Martin and Sanchez is confirmed, the singer could face up to 50 years in prison for incest charges under Puerto Rico law.

Martin addressed the accusations on Twitter on July 3, saying: ‘The protection order entered against me is based on completely false allegations, so I will respond through the judicial process with the facts and the dignity that characterize me.

‘Because it is an ongoing legal matter, I cannot make detailed statements at this time. I am grateful for the countless messages of solidarity, and I receive them with all my heart.’

He has not made any additional statements regarding the accusations. 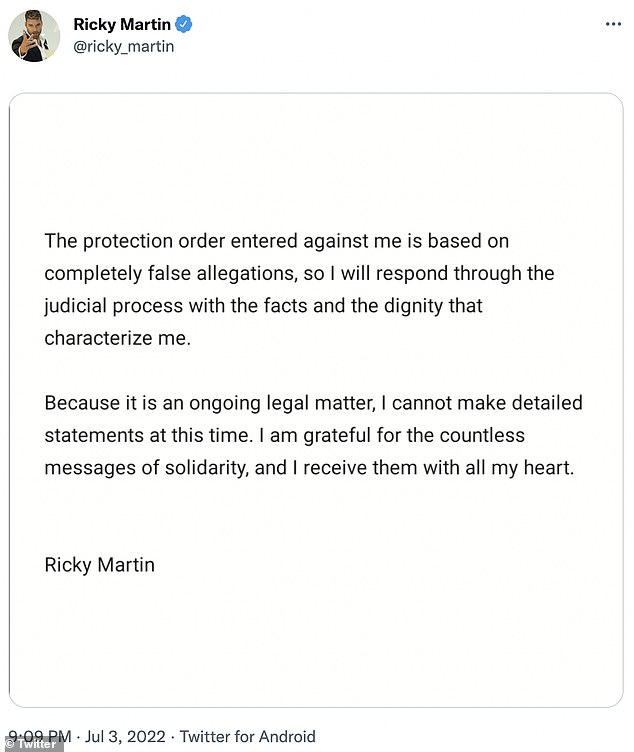 The revelation comes after claims that Sanchez has a lengthy criminal record in his native Puerto Rico and once threatened to kill a female co-worker.

Fox3Now reports that Sanchez’s colleague Claudia Ramrez Martell even took out a restraining order against him after he became ‘obsessed’ with her, repeatedly turning up outside their workplace saying he planned to murder her.

The Latin singer’s older brother said that the 21-year-old, who is now estranged from the family, had hurt other relatives.

He added that the family had been struggling to cope with Sanchez’s deteriorating mental health issues but that he was ‘tired of being quiet’ about them, though he said that he and his family still loved their troubled nephew. 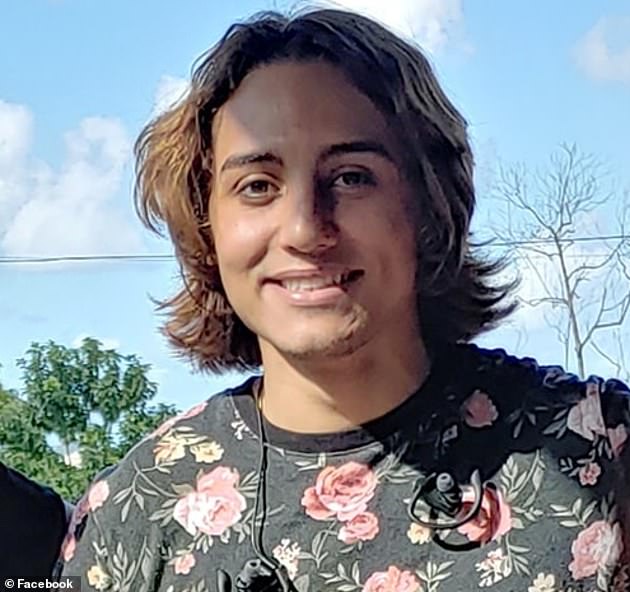 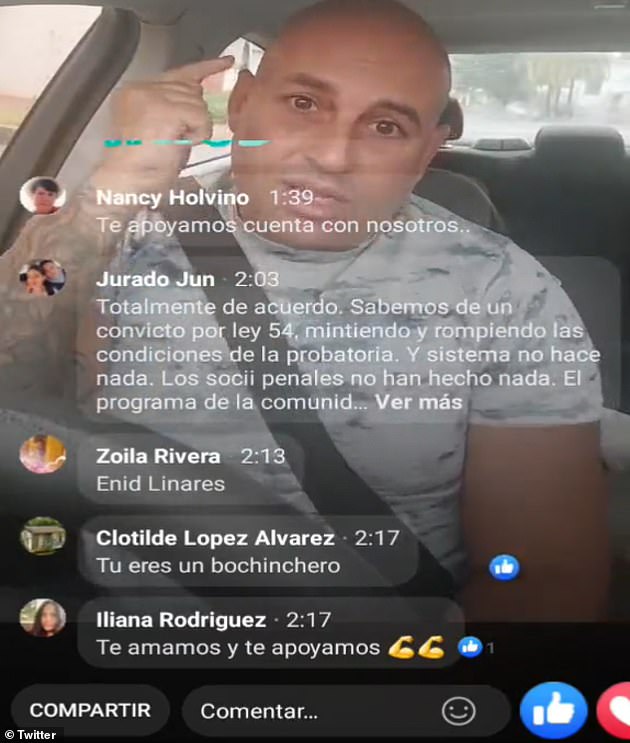 The Puerto Rican singer has been married to Syrian-born Swedish painter, Jwan Yosef, since 2017.

Since becoming comfortable with his sexuality, he has been an advocate for LGBTQ+ couples to adopt. In an interview with Out, he recalled that he had previously been fearful of not being able to have a family due to his sexuality prior to his coming out.

‘Many years I dreamt of being a father, and many, many, many times I went through this grieving process of I am gay, I am a closeted gay man, and I’m not going to be able to be a daddy,’ he said.

He pointed out that, although he supported the idea of adoption for LGBT+ couples, he was aware of the hardships that many of them faced.

‘Obviously adoption is an option and it’s very beautiful, but unfortunately for gay men it’s very difficult to adopt in some countries,’ he said.

Martin has been married to Syrian-born Swedish painter, Jwan Yosef, since 2017. 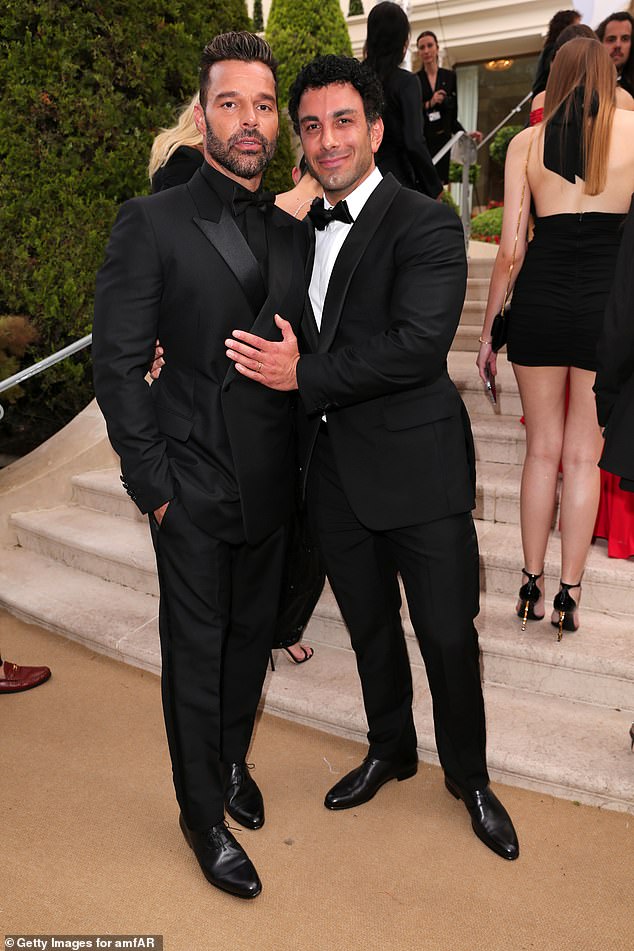 Martin has been married to painter Jwan Yosef since 2017. The couple share four children together 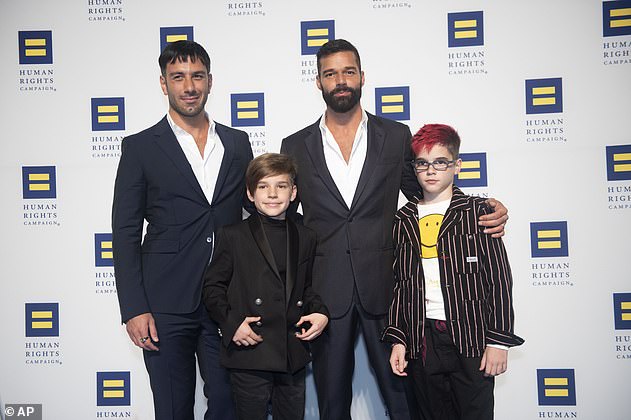 If convicted, Martin could have been sentenced to spend up to 50 years in prison. Pictured alongside his husband, Jwan Yosef, and their two eldest sons, Matteo and Valentino, in September 2019

In June 2021, Martin talked about his family while shutting down rumors they were expecting another child.

‘I don’t hide anything nowadays. We are not pregnant,’ Martin told People at the time. ‘Right now, we’re dealing with a pair of twins and a pair of Irish twins because Lucia and Renn are only nine months apart. And they’re overwhelming, but we’re strong and healthy.’

Still, he said they wanted ‘more’ kids in the future, and they have ’embryos frozen.’

Martin welcomed Matteo and his twin brother Valentino in 2008. The former Menudo member’s eldest children were born via gestational surrogacy.

At the time, the singer pointed out he had considered adoption, although he chose to work with a surrogate.

He later began a relationship with Yosef, his now-husband, and the twins’ second father, in 2016. The couple got engaged that same year and they tied the knot shortly thereafter.

The happy couple announced that they had welcomed a daughter named Lucia in December 2018.

The singer went on to reveal he and his husband were looking to add another child to their lives in September of 2019. Martin and Yosef, 37, subsequently welcomed a son named Renn the following month.